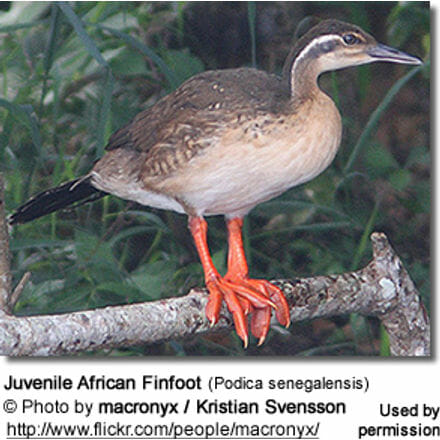 The African Finfoots inhabit large expanses of land and water in western, central, and southern Africa. They inhabit much of sub-Saharan Africa, from Senegal to Western Ethiopia and south through D.R. Congo, Angola, Zimbabwe, Central Mozambique and into Northeastern and Southern South Africa.

They are found in areas that contain rivers, fast-moving streams / rivers, coastal creeks, lakes and large, moving bodies of water.

Finfoots are highly secretive, and thus much of their biological data has not been discovered by ornithologists. Because they are so reserved, Finfoots often go unseen. They are territorial most of the time and definitely during breeding season. Although they do not migrate, they do disperse in order to form new colonies in preferred habitats.

They are usually seen singly or in pairs. Since they do not fly well, they stay near shady, calm waterways.

This cormorant-shaped bird’s back is dark brown spotted white. It has a grey head with a white stripe running from behind the eyes down the side of the neck.

The African Finfoot is an underwater specialist with a long neck, a striking red sharp beak, and bright red, lobed feet, as is typical of the Finfoot family and from which its common name has been derived. Their webbed, lobed feet allow them to be agile and graceful under water.

The plumage varies by race, generally pale underneath and darker on top. The males are usually darker than the females; and the male’s chin is black and female’s chin is white.

Finfoots are thought to be highly opportunistic; rather than diving for their food, they will forage on the water’s surface near the shore for their prey. Unlike the Grebes, they do very well on land, feeding from overhanging vegetation.

Most breeding activities occur from August to April, after the rainy season ends. During the breeding season, the Male African Finfoot’s plumage changes (breeding plumage).The Finfoots are monogamous.

The untidy bowl shaped nest is constructed with twigs, stalks, reeds, course grass and leaves and usually placed on a sloping branch or fallen tree suspended above the water, often in driftwood that got caught in the branches.

The average clutch consists of 1 – 2 pale buffy green eggs with brown and purple streaks, which are incubated by the female alone for about three weeks.

The precocial African Finfoot chicks leave the nest a few days after hatching.