The African Fish Eagles (Haliaeetus vocifer) – also commonly referred to as African Sea Eagles or River Eagles, West African River-eagle – are large eagles that are closely related to the critically endangered Madagascar Fish-eagles. This species is the national bird of Zimbabwe and Zambia.

Their range stretches over most of continental Africa south of the southern-most edge of the Sahara Desert.

They are commonly found near freshwater lakes, reservoirs or rivers. Occasionally, they are seen near the coast at the mouths of rivers or lagoons. 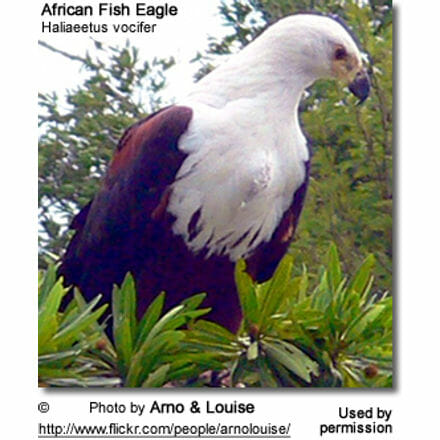 Their plumage is similar to that of the well-known Bald Eagle of the Americas; with a mostly dark-brown body, except for the distinctive white head, chest and tail.

The hook-shaped beak is yellow with a black tip

Males and females look alike, except the female is generally larger in size. 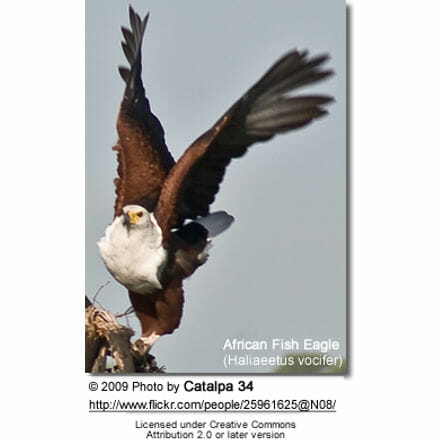 African Fish Eagles are believed to be monogamous (mating for life).

They typically breed during the dry season, when water levels are low.

Pairs typically maintain two or more platform nests made of sticks and other pieces of wood, which they often re-use and build upon over the years. These nests can grow quite large, some reaching up to 6 feet (2 meters) in diameter and 4 feet (1.2 meters) in depth.

These nets are usually placed in large trees.

The female lays 1 to 3 white eggs with a few reddish speckles. She incubates the eggs for 42 – 45 days to hatching. The male will assist on occasion, but she is mostly responsible for brooding, while the male will feed the nesting female.

The eggs usually hatch a few days apart, and the eldest chick often kills any younger chicks. The young will stay in the nest for 70 to 75 days and about 8 weeks later, the juvenile is able to feed itself and is independent. 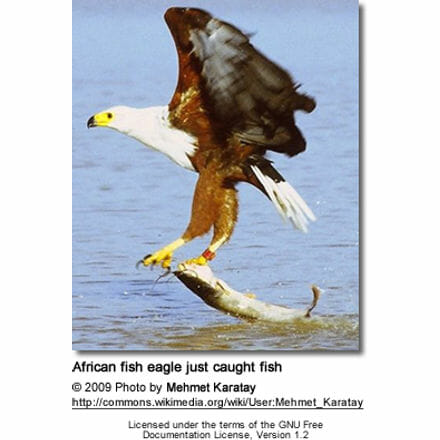 While perched on a tree, they will often swoop down and snatch fish from the water with their large clawed talons and fly back to the perch to eat it. In cases where fish are too heavy to allow them to carry them off (over 4 pounds or 1.8kg), they will drag the fish across the surface of the water until they reach the shore.

Its distinctive calls are described as a weee-ah, hyo-hyo or a heee-ah, heeah-heeah, which is shriller when uttered by males.