The African Pygmy-Kingfisher (Ispidina picta) is a small insectivorous kingfisher found in the Afrotropics, mostly in woodland habitats. Some texts refer to this species as Ceyx pictus.

Some trives in Uganda refer do them as “dozers” due to the fact that they are frequently seen “dozing” with even the abrupt head jerks.

The African Pygmy Kingfisher is approximately 11-13 cm in length – about the size of a sparrow. It is the smallest of all Kingfishers in South Africa.

A very small kingfisher with rufous underparts and a blue back extending down to the tail. The dark blue crown of the adult separates it from the African Dwarf-Kingfisher.

The smaller size and violet wash on the ear coverts (the feathers covering the ears) distinguish it from the similar Malachite Kingfisher. The natalensis subspecies occurring in the south of the range has paler underparts and a blue spot above the white ear patch.

Juveniles have less extensive violet on their ear coverts and a black rather than orange bill. 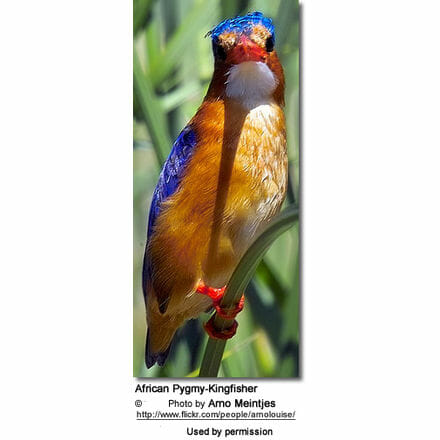 Usually found singly or in pairs. Secretive and unobtrusive.

Found in woodland, savanna and coastal forest. Being insectivorous, it is not bound to water.

The African Pygmy-Kingfisher is distributed widely in Africa south of the Sahara, where it is a common resident and intra-African migrant.

It is absent from much of the horn of Africa, and also the drier western regions of Southern Africa.

They mostly eat insects, but will also catch frogs and lizards.

They typically nest in tunnels and banks.

A high-pitched insect-like “tsip-tsip” given in flight. 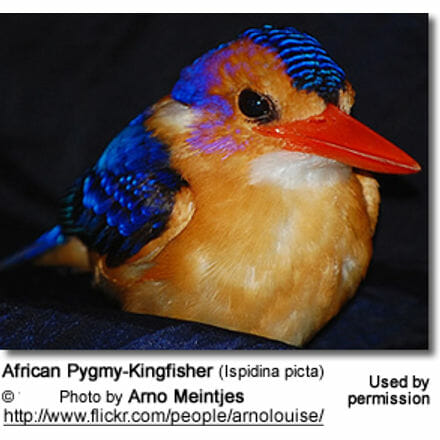