Albinism in hummingbirds is caused by a rare genetic change that either prevents or reduces the formation of dark-colored pigment in feathers. 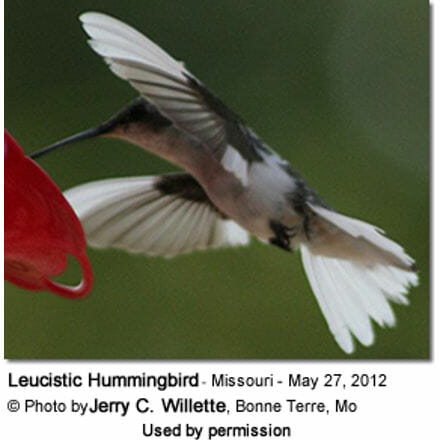 Sightings of White Hummingbirds in the United States (with locations, dates and photos)

Albinism in hummingbirds is caused by a rare genetic change that either prevents or reduces the formation of dark-colored pigment in feathers.

White hummers are extremely rare — less than a hundred sightings have been reported in the Americas; most of which involves “partial albinos” or “leucistics” and only a small percentage of the sightings involved “true albinos.”

Should you be so lucky to see a white hummingbird, get your camera out immediately and take as many pictures (or movies) as you can. Record any details about this bird (where seen, physical description and anything else that you find of interest). Please contact your local authorities for their records.

This genetically recessive characteristic only shows up when a bird inherits the albino gene from BOTH parents. When only one parent carries this gene, the resulting young will be normal-colored, but will be genetically “split” to this genetic trait.

Should these mate with either an albino or an albino-split, a certain percentage of white young / splits will result, even though the parents themselves may not visual albinos.

Abnormally white feathers are not always due to albinism. Other possible causes are:

There are four degrees of albinism

Under close inspection of an albino hummingbird, it was noted that the claws and the skin of the toes appeared transparent, so much so that the blood vessels underneath the skin could be seen.

Albino Sightings in the USA and Canada

States / Areas Albino Hummingbirds have been reported in – sorted by location and dates. Subspecies listed if known.

(Did you see one? If so, please e-mail information (date, location, etc. and photos. THANK YOU!)

Note: The left is likely an adult female and the right an immature bird (unknown gender) that still needs to build muscles. In an adult, this poor development of muscles could be a sign of poor health ….

Migratory hummingbirds tend to return to their favorite hummingbird feeders or flower patches year-after-year. However, it has been noted that this hasn’t been the case with albinos (true or partial) – none of which have been seen again at their previously favored feeding sites.

There are two possible scenarios that either alone, or in combination, could explain that …

Shorter lifespan … It is believed that albino hummingbirds don’t live as long as “normal”-colored hummingbirds, for the following reasons ….

Albino hummingbirds may be less likely to attract mates ..

Below are images of leucistic hummingbirds submitted by BeautyofBirds’ visitors. The images show the varying amounts of pigmentation occurring in this genetic mutation.

For information about these rare birds and sightings, please visit the below link.