The Allen’s Hummingbird (Selasphorus sasin) was named after the American collector and taxidermist Charles Andrew Allen (1841-1930), who who first noticed this species in the U.S. and described it to the American scientists. As a result, this species is now known as Allen’s hummingbird (Golden Gate Audubon Society, 2003).

This hummingbird summers along the pacific coast of the United States from Oregon to southern California. The nominate race migrates south to winter in Mexico.

A hybrid between the Allen’s Hummingbirds and the Anna’s Hummingbird has been described as Floresi’s Hummingbird, “Selasphorus” floresii (Ridgway, 1909; Taylor, 1909). 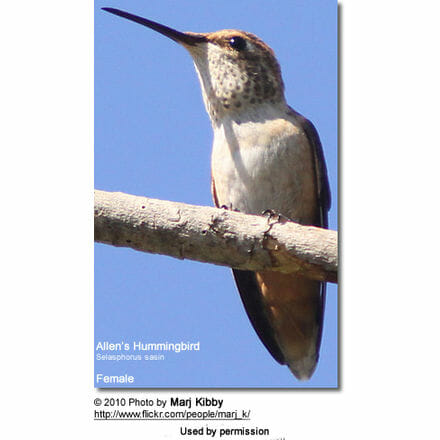 Only the migratory nominate race that occurs in the northern range migrates to the south all the way to winter along the Pacific coast of Mexico (including Baja California) and central Mexico, in the states of Mexico, Morelos and Puebla. They move south during July and August and most will have arrived at their winter destination by the end of October (Johnsgard, 1983).

The breeding (summer) range of the Allen’s hummingbird is continuously distributed along a narrow strip along the Pacific Coast, from southwest Oregon to southern California (Long, 1997).

The Allen’s hummingbirds arrive in their breeding territory in northern California and south Oregon no later than February. They are common breeders in the brushy woods, gardens and meadows of coastal California from Santa Barbara north, and the most southern tip of Oregon.

Their migratory paths may go through southern Arizona as well as Nevada, along the Gulf Coast from Texas to Louisiana, and western Washington (Long, 1997). This species is rarely observed in the eastern United States, although it has been recorded in Alabama, Delaware, Georgia and Florida, Illinois, Mississippi, and Missouri.

Subspecies: The subspecies Selasphorus sasin sedentarius is a permanent resident on the Channel Islands off southern California. In the 1960s, this species colonized the Palos Verdes Peninsula of Los Angeles County, but has since spread over much of Los Angeles and Orange Counties. 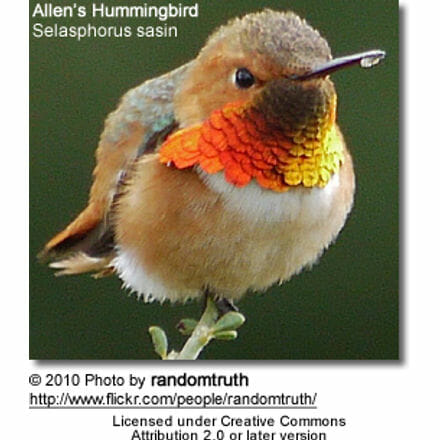 They are absent from mountainous areas above 9,000 feet, the Mojave Desert, grasslands, and the middle of dense forest because of the absence of hummingbird flowers (Long, 1997).

The male is highly aggressive and territorial. He will chase any other males or other hummingbirds from his territory using aerial flights and intimidation displays. (Cassidy 1990, Stokes 1989, Arizona-Sonora Desert Museum 1998) They have even been seen to attack birds several times larger their own size, even birds of prey, such as kestrels and hawks.

Males and females are not social birds and will defend separate feeding territories. 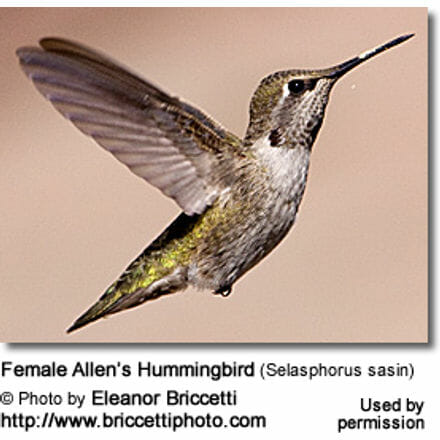 They primarily feed on nectar taken from a variety of brightly colored, scented small flowers of trees, herbs, shrubs and epiphytes, their favorite food plants being the “California fuchsia, honeysuckle, Indian paintbrush, madden, monkey-flower, [and] other flowering shrubs.” (Long, 1997).