The American Wigeons or American Widgeon (Anas americana) are also known as Baldpates, named so for the cream colored cap running from the crown of its head to the bill (pate is another word for head).

While foraging on the water with other birds, they are known to steal pieces of vegetation brought to the surface by other water birds. For this reason, they are sometimes referred to as “robber” or “poacher” ducks.

These common and widespread dabbling ducks are found in North America south to northern South America.

Outside the breeding season, they are highly gregarious and typically occur in small mixed flocks. They may form large flocks during the migration or at favored feeding sites. This species can be distinguished from other dabbling ducks by its small bill and the male’s white forehead .

They are most commonly observed swimming and feeding, and are, in general, most active on the water.

During the breeding season, however, they aggressively defend their breeding territories, which tend to be spaced out, with only one pair to a pond.

These strongly migratory ducks migrate south to winter along both Atlantic and Pacific coasts of North America, and along the Gulf of Mexico; extending south through Mexico and Central America, to the northern parts of South America; as well as the Bermuda Islands and Hawaii. Their wintering range includes all 48 lower USA states.

They are rare but regular vagrants to Western Europe (Britain), as far as northeastern Siberia and Japan.

In the winter, they are found most often near freshwater lakes, rivers, marshes and sheltered estuaries and bays, with abundant plants for feeding. 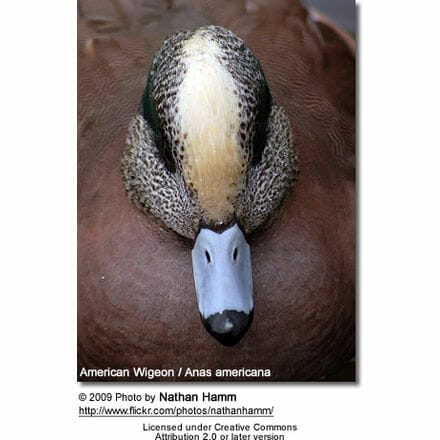 This medium-sized duck is larger than a teal, but smaller than a pintail. It has a round head, short neck, and a short, pale blue or greyish bill with black tip, and dark grey legs and feet. The body is reddish-brown, with dark iridescent-green wing patches and white markings on the forewing. The belly is bright white.

This wigeon undergoes two adult molts per year – in the spring it molts into breeding (alternate) plumage and in late autumn into the non-breeding (eclipse) plumage. Juveniles molt in the first year.

Breeding (or Alternate) Plumage: The forehead and forecrown are either white or cream-colored. The cheeks and chin are greyish. The rest of the neck, face and upper back are buffy white with heavy black speckling. A broad dark-green patch extends from behind the eyes to the nape (back of a bird’s neck). His undertail coverts (feathers) are black. The bill is blue-grey with a black tip. In flight, the males can be identified by the large white shoulder patch on each wing.

Non-breeding (Eclipse or Basic) Plumage: The drake looks more like the female; with variable amounts of white and green on head and slightly brighter sides and flanks. The undertail coverts (feathers) are variably black, with some white.

The plumage is primarily grey and brown (similar to that of a female mallard); except for the greyish head, brownish-black crown with white and dusky streaks. The white wing patches are poorly defined. 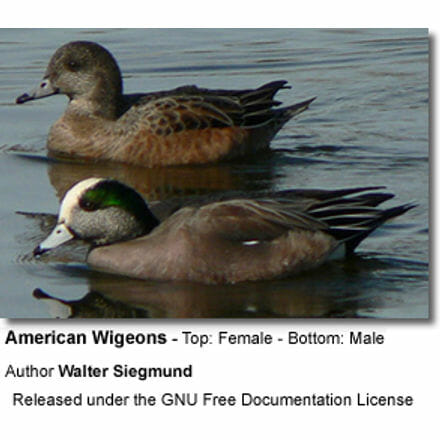 American Wigeons have a largely vegetarian consisting of the stems, roots and leafy parts of aquatic plants, such as muskgrasses (green or grey-green colored algae) and bushy pondweed, as well as grasses and various agricultural plants.

To a lesser extent, they feed on various aquatic insects, such as damselflies and caddisflies, as well as on crustaceans, mollusks and terrestrial insects, including beetles.

They feed both on land and on water (such as shallow, freshwater wetlands, marshes, mudflats, slow moving rivers and ponds).

The American Wigeon’s preferred foods are leaves and roots of submergent vegetation (plant that grow beneath the surface of water). However, since they are poor divers, these plants are often difficult for other water birds (including the larger geese) and muskrats (medium-sized semi-aquatic rodents).

In water, they feed by dabbling for plant food. “Dabbling” refers to the way they feed at the surface of water, by “dabbling” – moving the bill around in water while feeding, rather than by diving – as is typical of “diving ducks.” Dabbling Ducks rarely dive for food.

Growing juveniles require a higher percentage of protein and will consume more insects than adults.

They pluck vegetation with their strong bill and in water filter feed with the lamellae (miniature ridges inside the bills of water-feeding birds or “teeth”) on the upper bill. 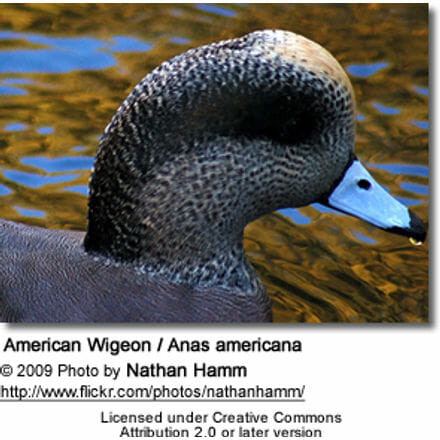 Pairs start form at the arrival on the wintering grounds, with males performing various courtship displays to attract females, such as swimming with heads thrust forward and wings pointed upwards; or facing the females with wings pointed upwards and dipping their bills into the water.

The male may also emit high-pitched calls with his body in erect posture and stiffening his upper head feathers, while standing either behind, ahead or besides the female.

They are usually paired up by February and breeding typically takes place in spring.

The females selects the nest site, which is typically placed on dry ground, yet near water, in a well-concealed location in areas of tall grasses and brush cover, in areas with ample food supplies.

The nests are constructed of grasses and weed stems (although sometimes they will nest in ground scrapes); and are lined with down and leaf litter.

The incubation begins at the completion of the clutch and usually continues for 23 to 25 days to hatching. The female alone incubates the eggs and she spends nearly 90% of the day on the nest.

When getting off them to feed, she covers the eggs with down and nest litter to conceal them. The male brings food to the female and spends most of his time protecting the nest or feeding. If the female senses a predator, she will silently get off the eggs and fly away from the nest to distract the predator.

If the young have already hatched, she may fly off while the ducklings dive or seek cover in surrounding vegetation. The female may perform a distraction display, feigning injury, flapping her wings over water and vocalizing. If necessary, she may also aggressively defend the nest against intruders.

The hatchlings are covered with down and are able to leave the nest with the female less than 24 hours after hatching. The young initially mostly feed on insects and eventually will change their diet to mostly aquatic vegetation, picked up by dabbling and off the surface. They are fully independent when they are about 37 – 48 days old.

Pairs are monogamous and males typically remain with their mates through spring migration, nest selection, nest building and egg laying. During the second week of incubation, males usually leave, joining other males and non-breeding females to molt.

The young reach reproductive maturity when they are about 1 year old.

The American Wigeons are generally noisy. The male’s call is described as a clear whistle in three syllables: whoee-whoe-whoe, whereas the female’s as a hoarse grunt or low growl qua-ack.

In the wild, American Widgeons have a maximum recorded lifespan of 21 years; however, most do not live that long. The average lifespan for a female is 1.7 years and for a male about 2.3 years (Mowbray, 1999).

As with most animals, they are most vulnerable when they are young. More than half (69%) of the great blue herons born in one year will die before they are a year old.

Repeated human disturbance close to the nesting site can also result in abandonment of eggs or chicks.