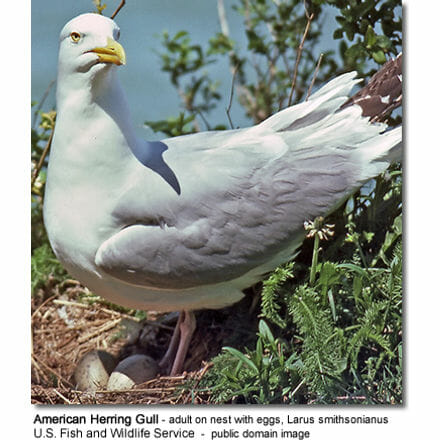 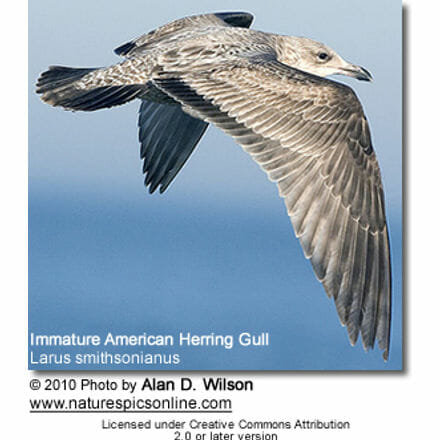 The American Herring Gull, Larus smithsonianus, is a large gull which breeds in North America. It is often treated as a subspecies of the European Herring Gull (L. argentatus) but is now regarded as a separate species by some authorities.

Adults are white with gray back and wings, black wingtips with white spots, and pink legs. Immature birds are gray-brown and are darker and more uniform than European Herring Gulls with a dark tail.

It occurs in a variety of habitats including coasts, lakes, rivers and garbage dumps. Its broad diet includes invertebrates, fish and many other items. It usually nests near water, laying around three eggs in a scrape on the ground.

Breeding adults have a white head, rump, tail and underparts and a pale gray back and upperwings. The wingtips are black with white spots known as “mirrors” and the rear edge of the wing is white. The underwing is grayish with dark tips to the outer primary feathers. The legs and feet are normally pink but can occasionally be yellow. The bill is yellow with a red spot on the lower mandible. The eye is yellow with a bare yellow or orange ring around it. In winter, the head and neck are streaked with brown.

Young birds take four years to reach fully adult plumage. During this time they go through several plumage stages and can be very variable in appearance. First-winter birds are gray-brown with a dark tail, a brown rump with dark bars, dark outer primaries and pale inner primaries (= longest wing feathers), dark eyes and a dark bill which usually develops a paler base through the winter. The head is often paler than the body. Second-winter birds typically have a pale eye, pale bill with black tip, pale head and begin to show gray feathers on the back. Third-winter birds are closer to adults but still have some black on the bill and brown on the body and wings and have a black band on the tail. 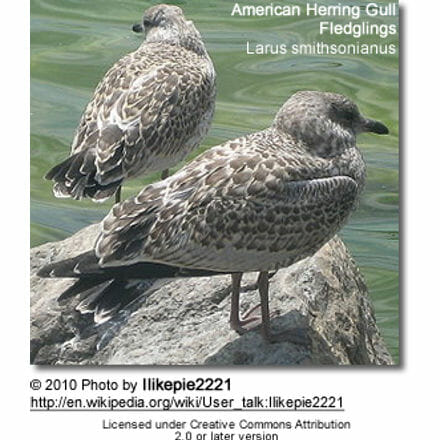 It has no song but has a variety of calls. The “long call” is a series of notes during which the head is dipped then raised. The “choking call” is produced during courtship displays or territorial disputes.

Adult European Herring Gulls are very similar to American Herring Gulls but those of the subspecies L. a. argenteus are smaller than many American birds while those of the northern subspecies L. a. argentatus are typically darker gray above. European birds lack the long gray tongues on the 6th, 7th and 8th primaries (longest wing feathers) and solid black markings on the 5th and 6th primaries that are shown by American Herring Gulls. First-winter European birds have more checkered upperparts, more streaked underparts, and a paler rump and base to the tail. 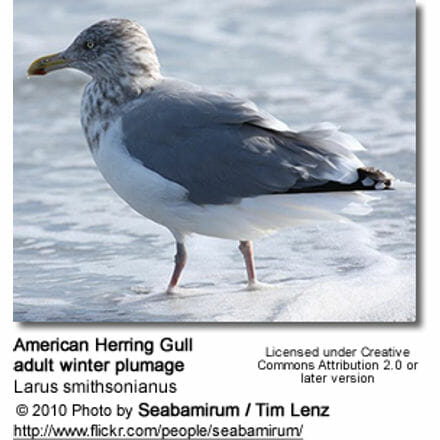 The breeding range extends across the northern part of North America from central and southern Alaska to the Great Lakes and north-east coast of the USA south to North Carolina. It breeds over most of Canada apart from the southwest and Arctic regions.

Birds are present all year in southern Alaska, the Great Lakes and north-east USA but most birds winter to the south of the breeding range as far as Mexico with small numbers reaching Hawaii, Central America and the West Indies. Vagrants have reached Colombia and Venezuela and there is a report from Peru. The first European record was of a bird ringed in New Brunswick which was caught on a boat in Spanish waters in 1937 and there are have a number of additional records from Western Europe since 1990. The first British record was in 1994 in Cheshire.

It usually nests in colonies near water on coasts, islands and cliffs. It also nests on rooftops in some cities. It feeds at sea and on beaches, mudflats, lakes, rivers, fields and refuse dumps. It roosts in open areas close to feeding sites. 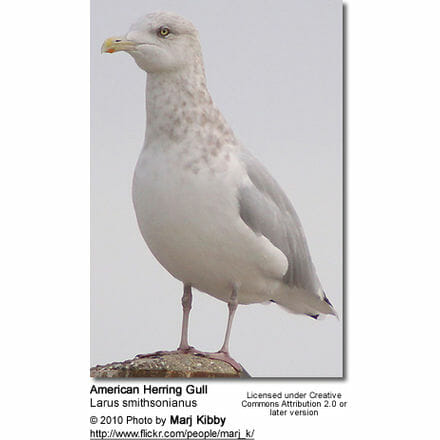 It has a varied diet including marine invertebrates such as mussels, crabs, sea urchins and squid, fish such as capelin, alewife and smelt, insects and other birds including their chicks and eggs. It often feeds on carrion and human refuse. Food is plucked from the surface of the shore or sea or is caught by dipping underwater or by shallow plunge-diving.

Pairs form in March or April. The nest is a scrape on the ground lined with vegetation such as grass and seaweed and with feathers. Usually three eggs are laid over a four to six day period. They are 72 mm long and are variable in color with brown markings on a pale blue, olive or cinnamon background. The eggs are incubated for 30–32 days beginning when the second egg is laid. The young birds fledge after 6–7 weeks and are fed in the nest area for several more weeks. They continue to be cared for by the parents until they are about 6 months old. Both parents are involved in building the nest, incubating the eggs and feeding the young. 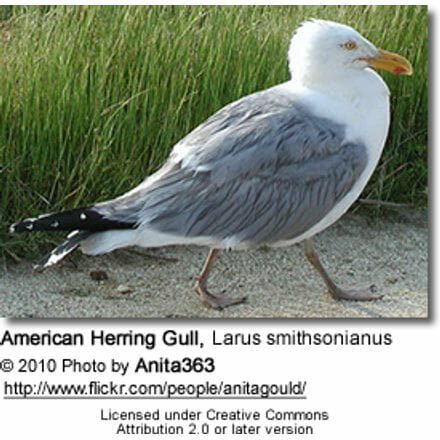 The species became quite rare during the 19th century when it was hunted for its eggs and feathers. From the 1930s to 1960s, it increased rapidly due to protection from hunting, increased waste from fisheries to feed on and less competition for small fish and invertebrates as humans reduced the populations of large fish, whales and pinnipeds. Numbers leveled off during the 1970s and 80s and may now be declining in some areas. 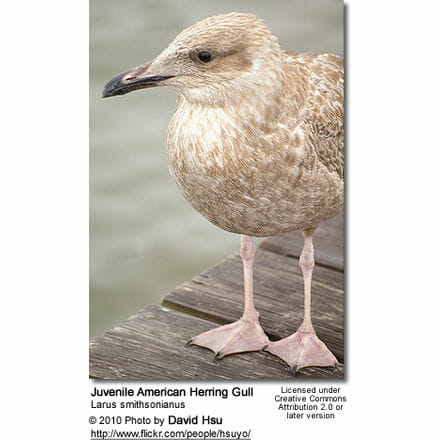