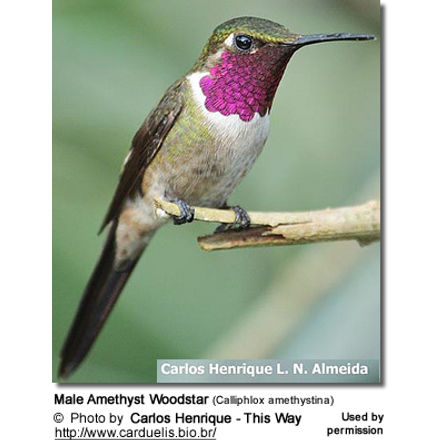 The Amethyst Woodstar (Calliphlox amethystina) – also referred to as Amythyst Woodstar – is one of the smallest hummingbirds in existence. It occurs naturally in South America east of the Andes from Venezuela to northern Argentina.

The Amethyst Woodstar is considered sedentary (non-migratory) within its range – except for some post-breeding dispersal. 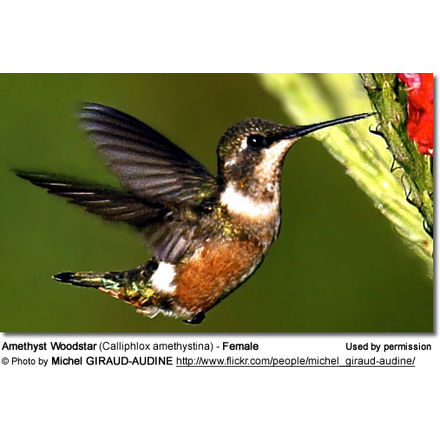 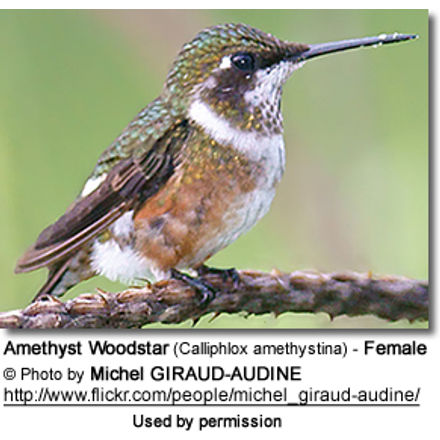 They occur in the Andes foothills and higher elevations of upstream river systems; but are not found along the Amazon River itself in the central Amazon Basin or the central upper Basin.

In the Guianas, the Amethyst Woodstars are generally rare and very localized. In Suriname, they are mostly found in the sandy areas behind Zanderij Zanderij in Para..

The Amazon Woodstar are found in a wide variety of habitats, including open woodlands, savannas and forest clearings and gardens. They generally avoid forest interiors. 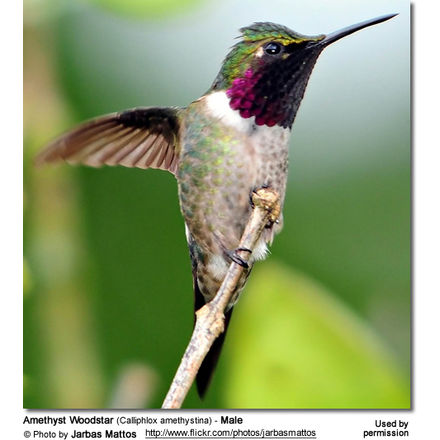 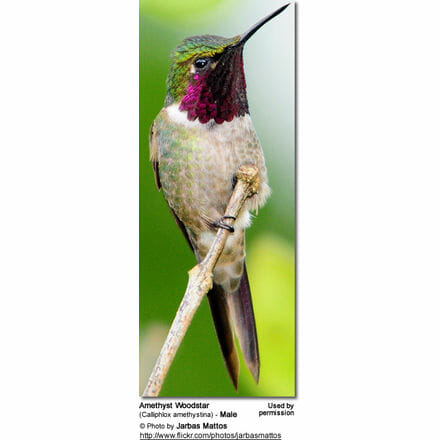 The Amethyst Woodstar measures between 2.4 to 3.4 inches (6 – 8.5 cm) and generally weighs less than 0.11 oz (3 grams), which makes it one of the smallest birds in existence. (Note: Measurements by Edson Pelosi MSc of Environmental Sciences Brazil – Rio.)

The adult male has an iridescent violet (amethyst) throat which can look dark / blackish in less favorable light conditions.

He has white band across the chest and a deeply forked tail.

The adult female has a whitish under plumage with green spots on her throat and a shorter tail than the male.

The female Amethyst Woodstar is responsible for building the small cup-shaped nest out of plant fibers woven together and green moss on the outside for camouflage in a protected location in a shrub, bush or tree. She lines the nest with soft plant fibers, animal hair and feather down, and strengthens the structure with spider webbing and other sticky material, giving it an elastic quality to allow it to stretch to double its size as the chicks grow and need more room. The nest is typically found on a low, thin horizontal branch.

The average clutch consists of 1 to 3 white eggs (mostly two), which she incubates alone for 13 to 14 days, while the male defends his territory and the flowers he feeds on. The young are born blind, immobile and without any down.

As is the case with other hummingbird species, the chicks are brooded only the first week or two, and left alone even on cooler nights after about 12 days – probably due to the small nest size. The chicks leave the nest when they are about 20 – 22 days old. 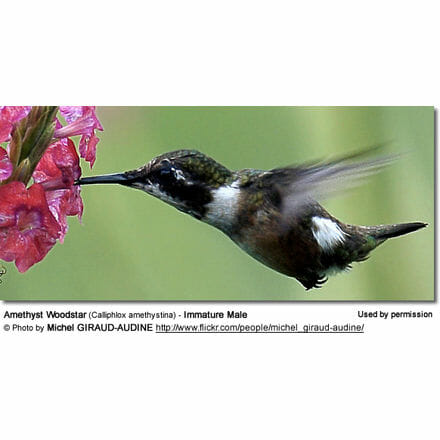 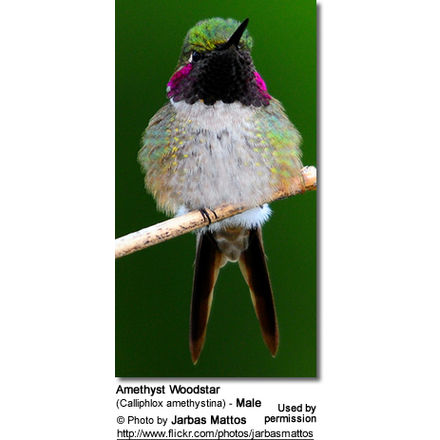 The Amethyst Woodstars primarily feed on nectar taken from a variety of brightly colored, scented small flowers of trees, herbs, shrubs and epiphytes. They favor flowers with the highest sugar content (often red-colored and tubular-shaped) and seek out, and aggressively protect, those areas containing flowers with high energy nectar.They use their long, extendible, straw-like tongues to retrieve the nectar while hovering with their tails cocked upward as they are licking at the nectar up to 13 times per second. Sometimes they may be seen hanging on the flower while feeding. 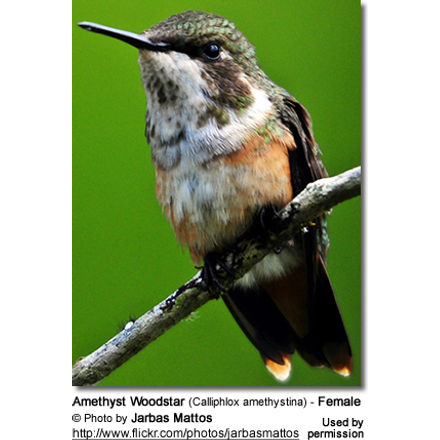 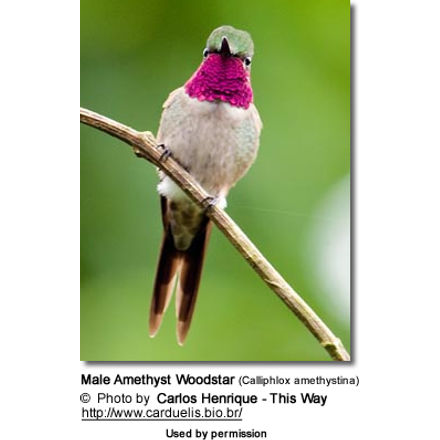 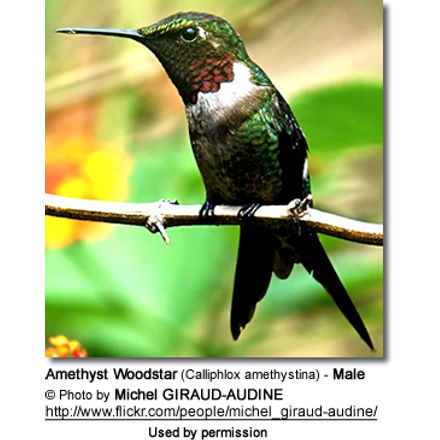 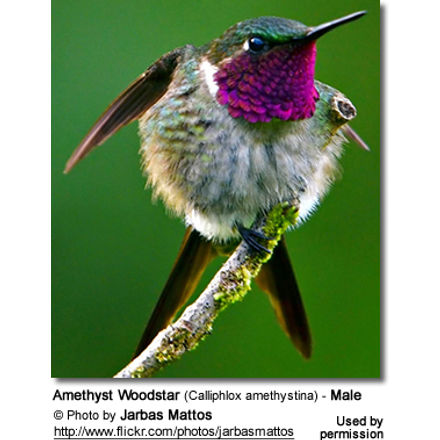 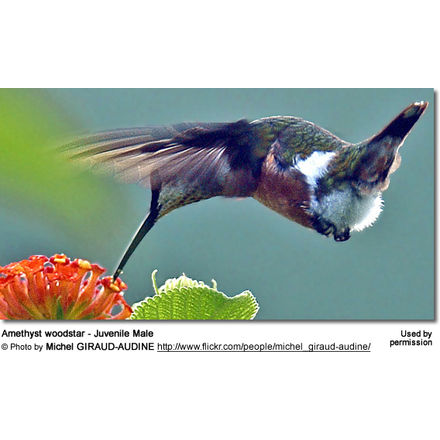