There are two sub-species; however there was a study in 1998 that suggested splitting this species, but this was an refuted in a 2004 study.

The Antipodean is large, at 110 cm (43 in) in length. Its breeding plumage is brown and white and its juveniles are similar in appearance to the Wandering Albatross. Breeding females have brown upper parts, and have white vermiculations on their back. Its face, throat, lower breast, and belly are white, and its undertail coverts (vent) are brown.

Its underwings are also white, but with a dark tip. Breeding males are whiter than females, but not as white as the Wandering Albatross, and both sexes have a pink bill. The females of the nominate race have a dark brown breast band and the males have a darker cap, tail, and humeral flexure than gibsoni.

At sea Antipodean Albatrosses range across the South Pacific from Australia to as far as Chile, from the Tropic of Capricorn south. The gibsonii seems to range to the east of Auckland Island, and the nominate race ranges to the east to Chile. They breed on Auckland Islands, Antipodes Islands, and Campbell Island. 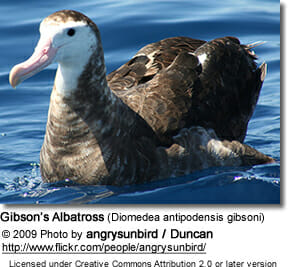 They feed predominantly on cephalopod and to a lesser extent fish (unlike other albatross species they are not recorded eating any crustaceans), and have been recorded visiting the spawning grounds of the giant cuttlefish off New South Wales.

They nest on ridges, slopes, or plateaus, and will build their nest in the open or within patchy vegetation, such as tussock grassland. 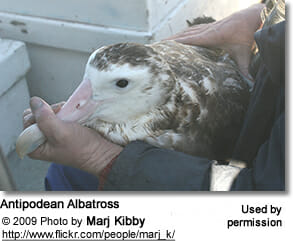 There has been 1 pair breeding on Pitt Island, Chatham Islands since 2004. This places the total population at 25,300. Both breeding success (25%) and adult survival rates (80% female and 88% male) have been declining.

Pigs and feral cats are hurting the population on Auckland Island and long line fishing is still impacting them. Recent studies have shown that a rise in Tasman Sea temperature may be impacting gibsoni.

Banding has been an ongoing process, and will continue with satellite tracking of the species. Cattle and sheep have been eradicated off of Campbell Island, and all the islands are nature preserves and recently became World Heritage Sites. Cats and pigs need to be removed from the Auckland Islands, the fisheries need to be worked with and the ocean temperature fluctuations need to be studied to help this species survive.

The Antipodean Alabatross comes from the Procellariiformes order. Like all members of this order, they have naricorns, tubular nasal passages on their bill. They also have a unique palate with 7 to 9 bony plates.

One of the great albatrosses of the genus Diomedea, it was only distinguished as a subspecies of the Wandering Albatross in 1992 and recognized by some authorities as a full species in 1998.

While not all scientists believe it is a full species, retaining it with the Wandering Albatross, a 2004 study of the mitochondrial DNA and microsatellites of the Wandering Albatross species complex supported the split. Among the major experts, BirdLife International has split this species, Jeff Clements has not yet, and the SACC has a proposal on the table to split it. 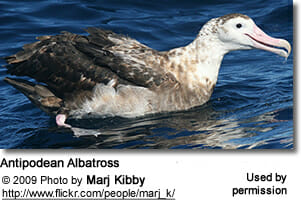 Diomedea antipodensis breaks into Diomedea referring to Diomedes, whose companions turned to birds, and antipodensis, the Latin form of Antipodes Island south of New Zealand, where they are found.