The Aplomado Falcon, Falco femoralis, is a medium-sized falcon of the Americas. Spanish names for the species include Halcón fajado and Halcón aplomado.

“Aplomado” is an unusual Spanish word for “lead-colored”, referring to the blue-gray areas of the plumage.

This resemblance in shape to the hobbies accounts for the former name Orange-chested Hobby.

In adult birds, the upperparts are dark blue-gray, as is much of the head, with the usual falcon “moustache” contrasting sharply with the white throat and eyestripe. The upper breast continues the white of the throat; there are black patches on each side of the lower breast that meet in the middle; the belly and thighs, below the black patches, are light cinnamon. The tail is black with narrow white or gray bars.

Juvenile birds are very similar, but their upperparts and belly band are blackish brown, the chest is streaked with black, the white on the head and breast is buffy, and the cinnamon on the underparts is paler. 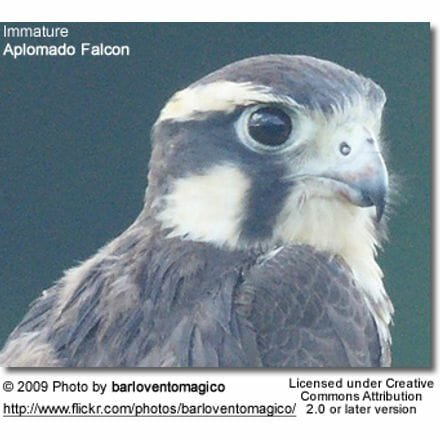 It may be confused with the Bat Falcon and the Orange-breasted Falcon, which have similar white-black-rust patterns below, but those species are built more like Peregrines and have solidly blackish heads and darker rufous bellies.

It feeds on insects and small vertebrates, especially birds, and is often seen soaring at twilight hunting insects and eating them on the wing. It also hunts at fields being burned, at which many birds of this species may gather. In Brazil, Aplomado Falcons have been observed following Maned Wolves and chasing birds that the wolves flush (Silveira et al. 1997).

It ranges from northern Mexico and Trinidad locally to southern South America, but has been extirpated from much of its range, including northern and central Mexico except for a small area of Chihuahua. Until the 1950s it was found in the extreme southwestern United States, and reintroduction efforts are under way in West Texas.

It may be returning naturally to southern New Mexico, as it has been seen there every year from 2000 to 2005 and bred successfully in 2002.

The Aplomado Falcon’s habitat is arid grasslands, savannahs, and marshes.