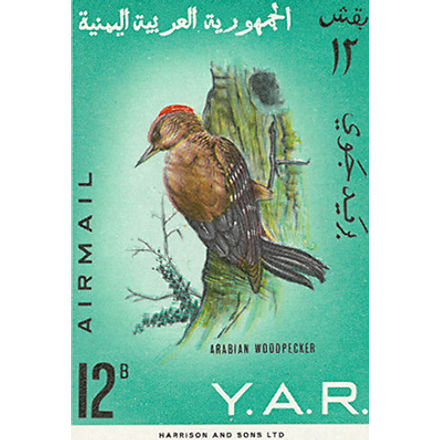 The Arabian Woodpecker (Dendrocopos dorae) has been scientifically described by George Latimer Bates and Norman Boyd Kinnear, However, its taxonomic name was suggested by their co-worker, St. John Philby, in honor of his wife, Dora. This is a monotypic woodpecker; therefore, it has no subspecies.

This bird is becoming increasingly more difficult to observe. It is generally ucommon to rare in its habitat, and local densities are probably equivalent to fewer than one mature individual per square kilometer. The total population is estimated to number fewer than 10,000 mature individuals and is continuing to decline. Its IUCN classification is “Vulnerable” (VU); as such, it is on the IUCN Red List and is considered to be facing a high risk of extinction in the wild due to habitat destruction.

The Arabian Woodpecker dwells in the Arabian Peninsula, primarily in southwestern Saudi Arabia and Yemen in areas of montane forest. It can be found locally in the Red Sea foothills in a narrow band from just north of Mecca to South Yemen.

This species inhabits woodlands on mountain slopes from sea level up to 3,000 meters. A terrestrial species, it prefers the types of woodlands which now only exist in residual fragments in Yemen, following millennia of settlement, cultivation and livestock-grazing. These fragmented woodlands include groves of fig Ficus, date-palm Phoenix, and pandan Pandanus at lower altitudes. It favors subtropical, evergreen riparian forest, traditional shade-coffee plantations, and well-developed succulent shrubland at middle-altitudes. Other preferred forest growths are groves and parklands of Acacia, Juniperus, Olea and Dracaena at higher altitudes (often on slopes terraced for agriculture), and old-established orchards in the highlands. The desired climate is subtropical to tropical, in dry shrubland at high altitudes and moist to dry savannas.

This small, grey- to olive-brown bird has markings that seem a bit plain compared to other woodpeckers. The male possesses a crimson patch on the back of its head, and both male and female have a red patch at the center of their bellies which resemble smudges of paint. White bars extend across the blackish wings and can be viewed as the bird flies in the typical, undulating woodpecker flight pattern. Its long, chisel-tipped bill is slate-grey and perfectly adapted for hammering on the trunk of a tree. The Arabian measures 18 cm. in length and weighs 19 – 20 g.

The Arabian uses its extremely long, slightly barbed tongue to catch its prey. Because the tongue is coated with a sticky substance, it can easily catch insects such as fig wasps and aphids. It also uses its strong bill to hammer and probe open bark and to extract wood-boring insects and ants. In the winter, when insects are less common, it will also feed on the sap that oozes out from the tree.

The only woodpecker which breeds in Arabia, this species lives alone or with one other companion. Its breeding months are March to May. Their strong bills enables them to excavate their nest holes in live or dead trees; after choosing a large, dead wood or a soft-wooded tree species, they excavate a small hole in the trunk or major branch. The Arabian is dependent on these larger trees for their nesting sites. The female generally lays a clutch of three eggs, and both parents incubate the eggs for eleven days. They both also share feeding responsibilities. The young fledge after only 22 days, but remain in the nesting area for a further two months. Breeding takes place at altitudes from 400 meters up to 2,400 meters, although they probably breed as lower altitudes, even as low as sea-level.