They breed in south-east Siberia, north-east China, Korea and Japan. Those found on the Ryūkyū Islands of southern Japan are often considered to be a separate species—Ryukyu Minivet (P. tegimae).

They winter in South and South-east Asia as far south as Sumatra, Borneo and the Philippines. This is the longest distance migrant among the minivets. Migrant birds can often be seen in large flocks.

They inhabit forests as well as more open areas with scattered trees. 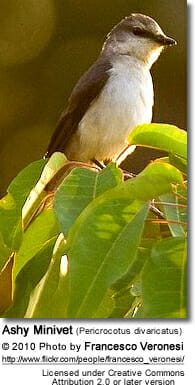 While most of the minivet species have plumages with shades of yellow, orange and red, the Ashy Minivet’s plumage is a mix of greys, whites and blacks.

The male is grey above and whitish below. He has a white face with a distinctive black cap. There is a white band across the flight-feathers. The outer tail feathers are white. The bill and feet are black.

The female‘s cap is grey apart from a black band between the bill and eye and a narrow white band above it.

It is considered as closely related to Pericrocotus roseus (Rosy Minivet) and Pericrocotus cantonensis (Swinhoe’s Minivet) but differs in moult pattern.

It is one of the few passerine birds that moult their primaries (longest wing feathers) twice in a year.

Females can be confused with the female of the Brown-rumped Minivet.

The call is described as a high-pitched, metallic trill.

They typically forage in the tree canopy for insects sometimes joining mixed-species flocks.

The average clutch consists of four to seven eggs, which are incubated for 17 to 18 days.