The Asian or Common Koel (Eudynamys scolopaceus) is a member of the cuckoo order of birds, the Cuculiformes. It is found in South Asia, China, and Southeast Asia.

It forms a superspecies with the closely related Black-billed and Pacific Koels which are sometimes treated as subspecies. The Asian Koel is a brood parasite that lays its eggs in the nests of crows and other hosts, where the young are raised by the foster parents.

They are unusual among the cuckoos in being largely frugivorous as adults.

The word koel is echoic in origin and the bird is a widely used symbol in Indian poetry. It has been compared with the “nightingale” due to its melodious call.

The Asian Koel is a large, long-tailed, cuckoo at 45 cm.

The male of the nominate race is glossy bluish-black, with a pale green or grey bill, the iris is crimson, and it has grey legs and feet.

The female of the nominate race is brownish on the crown and has rufous streaks on the head. The back, rump and wing coverts are dark brown with white and buff spots. The underparts are whitish, but is heavily striped.

The other subspecies differ in colouration and size.

They are very vocal during the breeding season (March to August in South Asia), with a range of different calls. The familiar song of the male is a repeated koo-Ooo. The female makes a shrill kik-kik-kik… call. Calls vary between the races. 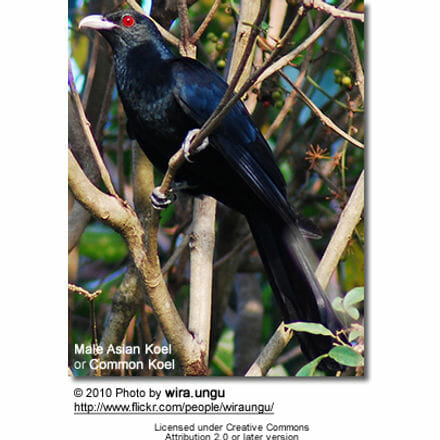 The Asian Koel was originally described by Linnaeus as Cuculus scolopaceus based on a specimen he received from the Malabar region. The species level taxonomy is complex and authors have proposed various taxonomic treatments. The Black-billed Koel (E. melanorhynchus) of the Sulawesi region and the Pacific Koel (E. orientalis) of Australasia are sometimes considered conspecific with the Asian Koel in which case the superspecies is known as the Common Koel (E. scolopaceus).

Due to differences in plumage, color of bill and voice, the three are increasingly treated as separate species.

Alternatively, only the Black-billed Koel has been considered as a separate species, or the Asian Koel has included all subspecies otherwise included in the Pacific Koel, except for the subspecies breeding in Australia, which then has the name Australian Koel (E. cyanocephalus).

The Asian Koel has several geographic forms that have well marked plumage differences or have been geographically isolated with little gene flow. The following is a list of named subspecies with their distributions and synonyms as given by Payne:

The Asian Koel is a bird of light woodland and cultivation. It is a mainly resident breeder in tropical southern Asia from India and Sri Lanka to south China and the Greater Sundas. They have great potential in colonizing new areas. They first arrived in Singapore in the 1980s and became very common birds. 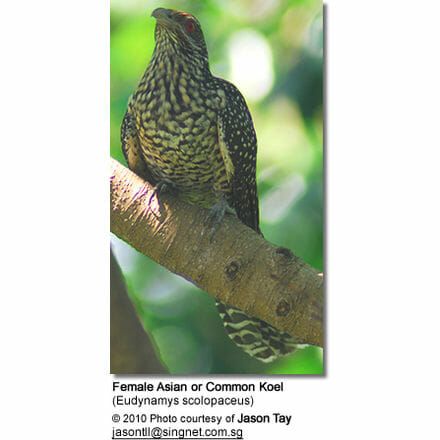 The Asian Koel is a brood parasite, and lays its single egg in the nests of a variety of birds, including the Jungle Crow, and House Crow.

In Sri Lanka it was known to parasitize only the Jungle Crow until the 1880 and later shifted to the House Crow. About 5% of Corvus splendens nests and 0.5% of Corvus macrorhynchos nests were found to be parasitized in a study in India.

In Southern Thailand and the Malay Peninsula, Koels have shifted host from crows to mynas (Acridotheres sp.) as the latter became more common in the late 1900s. In South Asia they have sometimes been found to parasitize the Black Drongo, the European Magpie and possibly the Black-headed Oriole.

Males may distract the hosts so that the female gets a chance to lay an egg in the nest. More often however, the female visits the nest of the host alone. T

he Koel is not known to lay eggs in an empty host nest and a study in Pakistan found that the first Koel eggs were laid, on average, within one and half days of the laying of the host’s first egg.

The chicks of the Koel hatched about 3 days ahead of the host chicks. Koels usually lay only an egg or two in a single nest but as many as seven to eleven eggs have been reported from some host nests.

A female may remove a host egg before laying. Eggs hatch in 12 to 14 days. The young Koel does not always push out eggs or evict the host chicks, and initially calls like a crow. The young fledge in 20 to 28 days.

Unlike as in some other cuckoos, the young do not attempt to kill the host chicks, a trait that is shared with the Channel-billed Cuckoos which are also largely frugivorous as adults. It has been suggested that Koels, like some other brood parasites do not evict the host chicks due presumably due to the higher cost of evicting nestmates.

A small parasite may not be able to evict large host eggs or chicks from a deep Corvid nest without risking starvation and possibly accidental self-eviction. An alternate hypothesis that retaining host chicks might benefit the Koel chicks did not gain much support.

Adult female koels have been known to feed young koels in the nests of the hosts, Adult males have however not been noted to feed fledglings. a behaviour known in some other brood parasitic species as well. 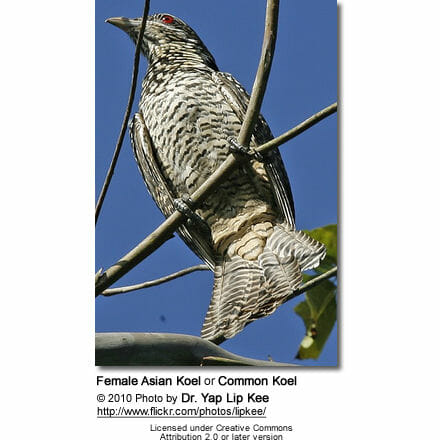 The Asian Koel is omnivorous, consuming a variety of insects, caterpillars, eggs and small vertebrates. Adults feed mainly on fruit. They will sometimes defend fruiting trees that they forage in and chase away other frugivores. They have been noted to be especially important in the dispersal of the sandalwood tree (Santalum album) in India.

Large seeded fruits are sometimes quickly regurgitated near the parent tree while small seeded fruits are ingested and are likely to be deposited at greater distances from the parent tree. They have a large gape and are capable of swallowing large fruits including the hard fruit of palms such as Arenga and Livistona. They have occasionally been known to take eggs of small birds.

They feed on the fruits of Thevetia peruviana which are known to be toxic to mammals.

The word “Koel” is derived from the Hindi word which is onomatopoeic in origin. The Sanskrit root is “Kokila” and the words in various Indian languages are similar. It is traditionally held in high regard for its song and held in reverence with the Manusmriti, an ancient decree protecting them from harm.

The Vedas, Sanskrit literature dated to about 2000 BC referred to it as Anya-Vapa which meant “that was raised by others”. This has been interpreted as the earliest knowledge of brood parasitism. Being familiar birds with loud calls, references to them are common in folklore, myth and poetry.

These birds were once very popular in India as cagebirds. Feeding even on boiled rice, these hardy birds lived in captivity for as long as 14 years.

This bird has an strong association with the Traditional new year celebrations of Sri Lanka. In the literature around the festival, the song of the bird regarded as a heralding of the traditional new year. This bird is known as the koha in Sri Lanka by the Sinhala speaking community.