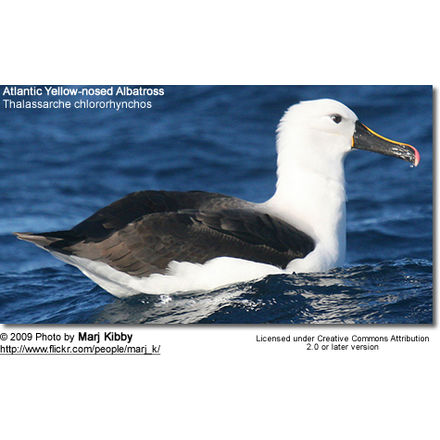 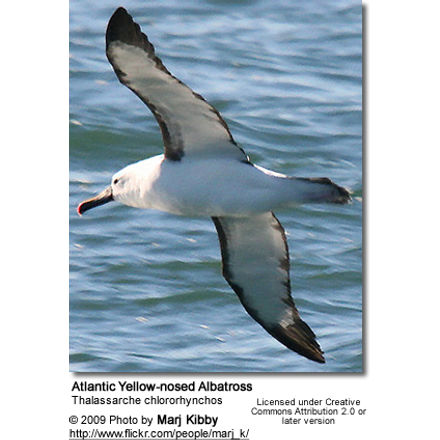 They share certain identifying features. First, they have nasal passages that attach to the upper bill called naricorns, although the nostrils on the Albatross are on the sides of the bill. The bills of Procellariiformes are also unique in that they are split into between 7 and 9 horny plates. Finally, they produce a stomach oil made up of wax esters and triglycerides that is stored in the proventriculus (stomach). This is used against predators as well as an energy rich food source for chicks and for the adults during their long flights. They also have a salt gland that is situated above the nasal passage and helps desalinate their bodies, due to the high amount of ocean water that they imbibe. It excretes a high saline solution from their nose. 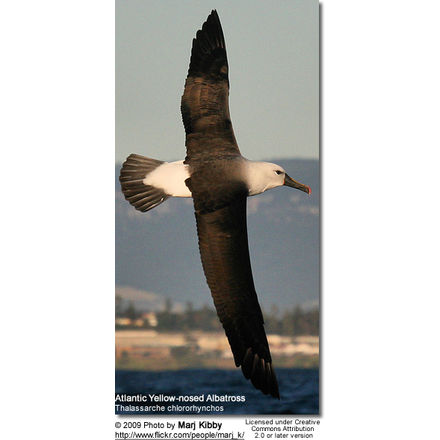 The Atlantic Yellow-nosed Albatross averages 81 cm (32 in) in length.

It is a typical black and white mollymawk with a grey head and large eye patch, and its nape and hindneck are white. Its bill is black with a yellow culmenicorn and a pink tip. It has a blackish grey saddle, tail and upperwing, and its underparts are predominantly white. Its underwing and primaries (longest wing feathers) show a narrow black margin.

The juvenile is similar to the adult but with a white head and black bill.

Similar Species: It can be differentiated from the Indian Yellow-nosed by its darker head. Relative to other mollymawks it can be distinguished by its smaller size (the wings being particularly narrow) and the thin black edging to the underwing. The Grey-headed Albatross has a similar grey head but more extensive and less well defined black markings around the edge of the underwing. Salvin’s Albatross also has a grey head but has much broader wings, a pale bill and even narrower black borders to the underwing.

This mollymawk feeds on squid, fish and crustacea.

Like all albatrosses they are colonial, but unusually they will build their nests in scrub or amongst Blechnum tree ferns. Like all mollymawks they build pedestal nests of mud, peat, feathers, and vegetation to lay their one egg in. They do this in September or early October, and the chick fledges in late March to April. They breed annually.

Atlantic Yellow-nosed Albatrosses nest on islands in the mid-Atlantic, including Tristan da Cunha (Inaccessible Island, Nightingale Island, Stoltenhoff Island) and Gough Island. At sea they range across the south Atlantic from South America to Africa between 15° S and 45° S. 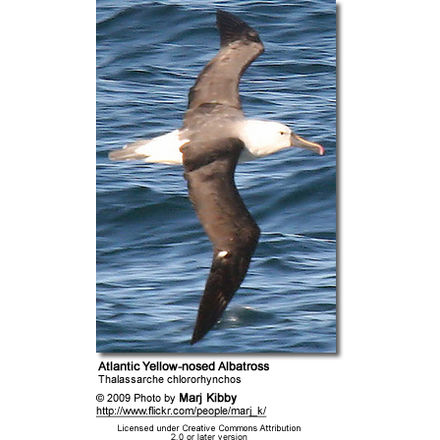 Trends suggest a 50% decrease over 72 years.

The largest threat is from longline fishing, and harvesting of chicks and adults has been outlawed.

Efforts to help conserve this bird are underway, with counting of the birds on Gough Island. Also, Gough Island and Inaccessible Island are nature preserves, and Gough Island is a World Heritage Site. The Tristan da Cunha population is being remotely tracked and counted, and the South East Atlantic Fisheries Commission has passed a resolution that all fishing vessels use a tori line and drop lines at night.