Skip to content
Auks: birds of the family Alcidae 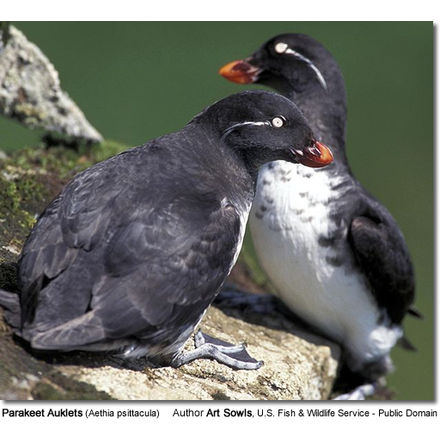 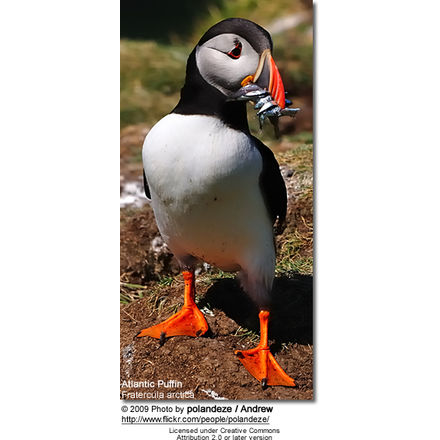 Auks are medium-sized seabirds that mostly occur in the in the Northern Hemisphere (north of the north of its equator).

Auks have long bodies, short tails, small wings and short legs that set far back on the body.

They are superficially similar to the unrelated penguins; however in contrast to penguins, the modern auks are able to fly (with the exception of the recently extinct Great Auk).

They are good swimmers and divers, but their walking appears clumsy. Due to their short wings auks have to flap their wings very quickly in order to fly.

Auks live on the open sea and only go ashore for breeding, although some species, like the Common Guillemot, spend a great part of the year defending their nesting spot from others.

Several species have different names in Europe and North America. The guillemots of Europe are murres in North America, if they occur in both continents, and the Little Auk becomes the Dovekie.

Some species, such as the Uria guillemots, nest in large colonies on cliff edges; others, like the Cepphus guillemots, breed in small groups on rocky coasts; and the puffins, auklets and some murrelets nest in burrows. All species except the Brachyramphus murrelets are colonial. 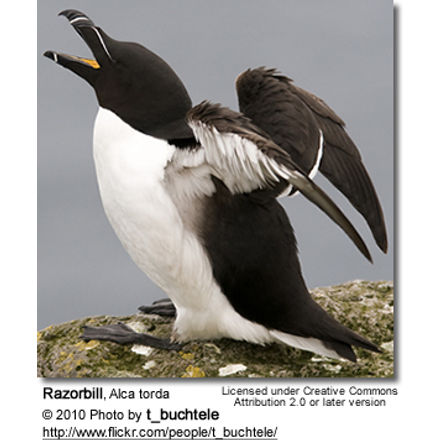 The feeding behaviour of auks is often compared to that of penguins; they are both wing-propelled pursuit divers. In the region where auks live their only seabird competition is with cormorants (which dive powered by their strong feet); in areas where the two groups feed on the same prey the auks tend to feed further offshore.

Although not to the extent of penguins, auks have to a large extent sacrificed flight, and also mobility on land, in exchange for swimming; their wings are a compromise between the best possible design for diving and the bare minimum needed for flying. This varies by subfamily, the Uria guillemots (including the Razorbill) and murrelets being the most efficient under the water, whereas the puffins and auklets are better adapted for flying and walking. This reflects the type of prey taken; murres hunt faster schooling fish, whereas auklets take slower moving krill. Time depth recorders on auks have shown that they can dive as deep as 100 m in the case of Uria guillemots, 40 m for the Cepphus guillemots and between 30 m for the auklets. 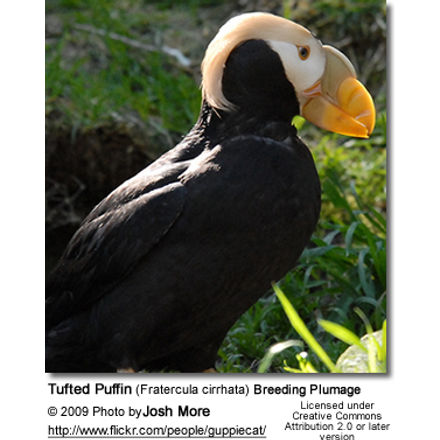 Traditionally, the auks were believed to be one of the earliest distinct charadriiform lineages due to their characteristic morphology. However, molecular analyses have demonstrated that these peculiarities are the product of strong natural selection instead: as opposed to, for example, plovers (a much older charadriiform lineage), auks radically changed from a wading shorebird to a diving seabird lifestyle. Thus, today, the auks are no longer separated in their own suborder (“Alcae“), but are considered part of the Lari suborder which otherwise contains gulls and similar birds.

Judging from molecular data, their closest living relatives appear to be the skuas, with these two lineages separating about 30 million years ago (mya). Alternatively, auks may have split off far earlier from the rest of the Lari and undergone strong morphological, but slow molecular evolution, which would require a very high evolutionary pressure, coupled with a long lifespan and slow reproduction.

The earliest unequivocal fossils of auks are from the Miocene (e.g. the genus Miocepphus, 15 mya). Two very fragmentary fossils are often assigned to the Alcidae, although this may not be correct: Hydrotherikornis (Late Eocene, some 35 mya) and Petralca (Late Oligocene). Most extant genera are known to exist since the Late Miocene or Early Pliocene (c. 5 mya). Miocene fossils have been found in both California and Maryland, but the greater diversity of fossils and tribes in the Pacific leads most scientists to conclude that it was there they first evolved, and it is in the Miocene Pacific that the first fossils of extant genera are found. Early movement between the Pacific and the Atlantic probably happened to the south (since there was no northern opening to the Atlantic), later movements across the Arctic Sea[2]. The flightless subfamily Mancallinae which was apparently restricted to the Pacific coast of southern North America became extinct in the Early Pleistocene. 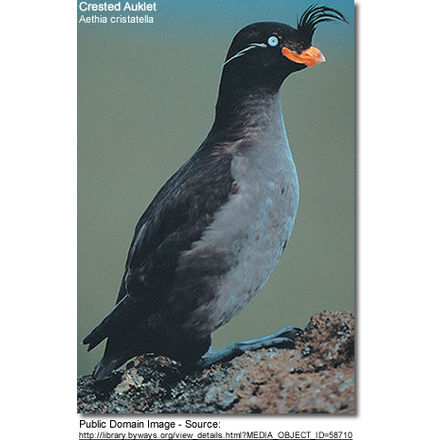 The extant auks (subfamily Alcinae) are broken up into 2 main groups: the usually high-billed puffins (tribe Fraterculini) and auklets (tribe Aethiini), as opposed to the more slender-billed murres and true auks (tribe Alcini), and the murrelets and guillemots (tribes Brachyramphini and Cepphini). The tribal arrangement was originally based on analyses of morphology and ecology. mtDNA cytochrome b sequence and allozyme studies> confirm these findings except that the Synthliboramphus murrelets should be split into a distinct tribe, as they appear more closely related to the Alcini – in any case, assumption of a closer relationship between the former and the true guillemots was only weakly supported by earlier studies.

Compared to other families of seabirds, there are no genera with many species (such as the 47 Larus gulls). This is probably a product of the rather small geographic range of the family (the most limited of any seabird family), and the periods of glacial advance and retreat that have kept the populations on the move in a narrow band of subarctic ocean.

Today, as in the past, the auks are restricted to cooler northern waters. Their ability to spread further south is restricted as their prey hunting method, pursuit diving, becomes less efficient in warmer waters. The speed at which small fish (which along with krill are the auk’s principal food items) can swim doubles as the temperature increases from 5°C to 15°C, with no corresponding increase in speed for the bird. The southernmost auks, in California and Mexico, can survive there because of cold upwellings. The current paucity of auks in the Atlantic (6 species), compared to the Pacific (19-20 species) is considered to be because of extinctions to the Atlantic auks; the fossil record shows there were many more species in the Atlantic during the Pliocene. Auks also tend to be restricted to continental shelf waters and breed on few oceanic islands.

This passage is in need of revision. Hydotherikornis oregonus (Described by Miller in 1931), the oldest purported alcid from the Eocene of California, is actually a petrel (as reviewed by Chandler in 1990) and is reassigned to the tubenoses (Procellariiformes). A 2003 paper entitled “The Earliest North American Record of Auk (Aves: Alcidae) From the Late Eocene of Central Georgia” by Robert M. Chandler and Dennis Parmley of Georgia College and State University reports a Late Eocene, wing-propelled diving, auk from the Priabonain Stage of the Late Eocene. These sediments have been dated through Chandronian NALMA {North American Land Mammal Age}, at an estimate of 34.5 to 35.5 million years on the Eocene time scale for fossil bearing sediments of the Clinchfield Formation, Gordon, Wilkinson County, Georgia. Furthermore, the sediments containing this unabraided portion of a left humerus (43.7mm long) are tropical or sub-tropical as evidenced by a wealth of warm water shark teeth, palaeophied snake vertebrae and turtles. 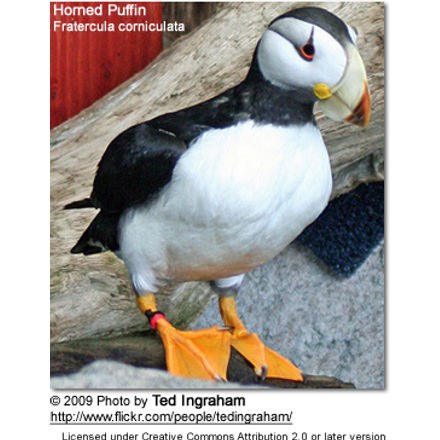