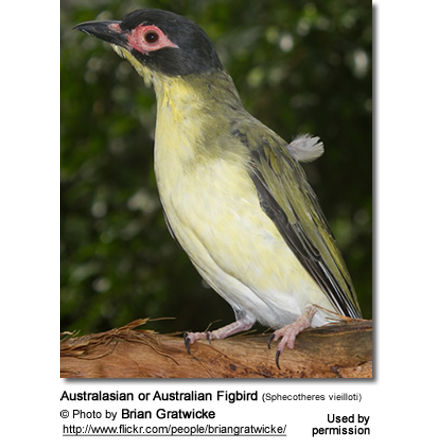 Within its native range in Australia (where this is the only naturally occurring figbird), this species is commonly simply referred to as “figbird.” They are also named for the fruits or berries they commonly feed on – Banana-bird and Mulberry-birds. Locals also refer to them in terms of their physical features, such as “Red-eyes” or “Yellow-bellied Figbirds”. 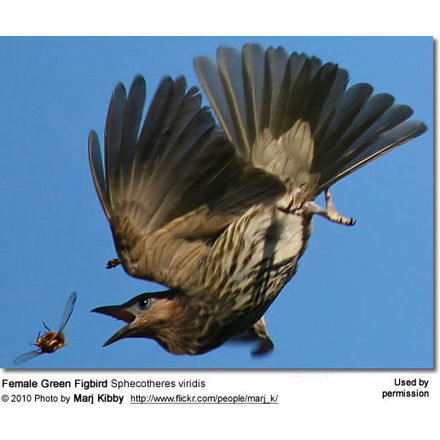 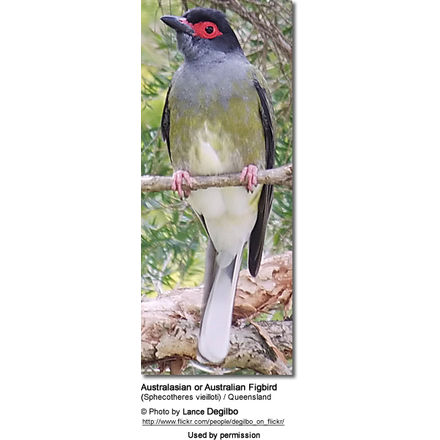 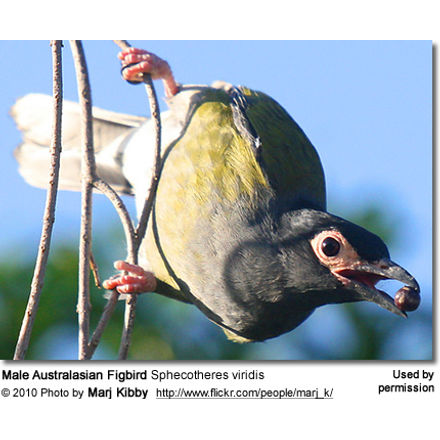 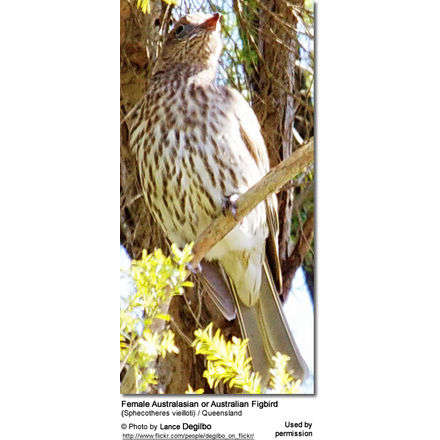 Australian Figbirds are distributed in the coastal regions of Northern and Eastern Australia and from the Kimberley region in Western Australia around to the New South Wales/Victoria border; as well as occurring in south-east New Guinea and the Kai Islands in Indonesia.

They live in rainforests, eucalyptus forests, woodlands and wet sclerophyll forests, as well as visiting urban parks, orchards and gardens. They typically remain close to fig and other fruiting trees – their primary food sources. They are often observed in mangroves—tropical evergreen trees on tidal coasts.

Australian Figbirds are mostly sedentary, but may undergo some movements outside the breeding season in response to the availability of food, particularly traveling southwards into Victoria.

The medium-sized Australasian Figbird has a total length of 27-29.5 cm (10½-11½ inches) and weighs about 128 g (4.5 oz). They are highly sexually dimorphic (males and females can easily be visually identified).

Males have a black head with distinctive bare, bright red facial skin around the eyes. In the nominate subspecies, the plumage is mostly olive-green, and the throat, neck and chest are grey. The male of the southern race found in eastern Australia has a grey collar, throat and chest with white belly. The male of the species found in northeast Queensland and northern Australia has a yellow throat, chest and belly and lacks the grey collar of the southern race.

Females are mostly brown and white plumaged with bold dark streaking. The facial skin is grey, There are no other other distinctive head markings. The dorsal areas (tops of the bodies) are brown-green and below (the vental parts) are an off-white with brown streaking.

Both males and females have a greyish-black bill with a red base and pinkish legs.

Immature birds resemble females, except the streaking below is generally not as strong. 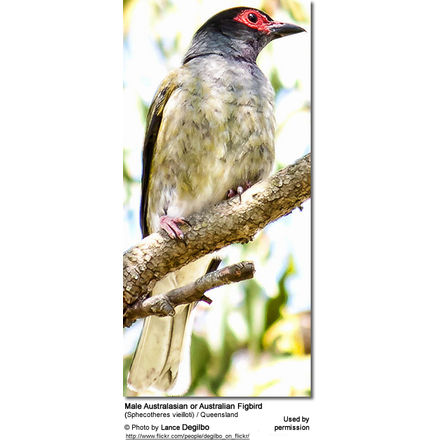 The Australasian Figbirds typically breed in small, loose colonies, constructing their nests in close proximity of each other in nearby trees.

The Figbird fashions a most unusual nest. The flimsy cup nest is shaped like a hammock and suspended from a horizontal fork in a tree near the end of a branch, between 6 and 20 meters from the ground. The nest is composed of vines and twigs.

The Figbird will breed from September to February, and it will lay 2-3 pale-green eggs with brown blotches, which are incubated for about 18 days to hatching. Both parents share the incubation duties and care for the young. The Figbird is an aggressive species, able to drive away nearly all predators, thereby affording protection to its nest sites. The young leave the nest when they are about 16 – 17 days old.

The Australian Figbirds have been recorded nesting near the nests of the aggressive Spangled Drongos and Helmeted Friarbirds – possibly to reduce the chance of falling victim to nest parasitism by Pacific Koels.

Outside the breeding season, figbirds feed in flocks of around 20 – 40 birds.

Figs are a particularly popular food item (as suggested by their common name), although they will feed on most soft fruits and berries in canopy trees. They consume Insects also.

The Northern Fig Bird loves the red fruits of palms, all types of fruit, including figs, native berries and cultivated fruits such as bananas and pawpaws (a variety of papaya).

They also have been known to eat nectar and seeds.

An outgoing group, their call resembles a loud, descending ‘chiew.’ Australasian Figbirds have in their repertoire of sounds many different short calls and are also able to imitate the calls of other birds. They will mimic parrots and some species of orioles.

Their vocalizations are mainly a series of simple whistles and noisy chattering.