Australasian or Australian Darters or Snakebirds

The Australasian Darters (Anhinga novaehollandiae) are also known as Australian Darters or Snakebird Darters – so named for their long, curved necks that look like winding snakes moving on the surface of the water while the rest of the darter’s body is submerged while swimming.

They are also commonly seen perching on branches, poles or rocks spreading their wings after foraging in water in order to dry their feathers, which is necessary before taking flight.

These solitary birds are usually seen alone, except during the breeding season, when they are forming pairs that only remain together for as long as it takes to raise the season’s young.

They usually live up to 15 years.

They are most common inland, where they inhabit freshwater or brackish wetlands with water levels of 1.6 feet (0.5 meter) or deeper, with tree trunks, branches, stumps, fallen trees or logs for resting and drying their wings after water excursions.

Occasionally, they are seen in sheltered coastal calm saltwater (near shores) or estuarine environments.

Outside the breeding season, these darters can travel over long distances of 1,250 miles (~2,000 km) or more.

Australian Darters are threatened by loss or destruction of their habitat, such as drainage of wetlands, extraction of groundwater, increase of salinity, clearing of vegetation and fires.

They are often disturbed by duck-shooting, or are shot themselves; get trapped in fishing nets and their eggs or young are preyed upon by other birds, mammals or reptiles. 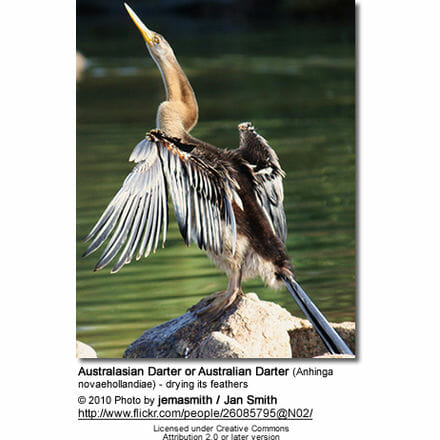 They have long, thin, strongly kinked necks and yellow, pointed bills. The eyes are yellowish and the legs and feet are flesh-colored.

Adult males have an overall dark brownish-black plumage; except for the whitish stripe on the face (from the base of the bill through the cheeks to the upper sides of the neck), the dark, chestnut-brown chest, and the white, silver-grey and brown streaks and spots on the otherwise glossy-black upper wings. The long, rounded tail is shiny grey-black.

Their walk on land is clumsy, but they fly gracefully to great heights.

Females and immature birds have lighter plumage than males, with grey-brown backs and pale grey lower parts. They have white neck stripes that are less distinct in juveniles.

They resemble the cormorants; but can be identified by their slender bodies, long and snake-like necks, and pointed (rather than hooked) bills. 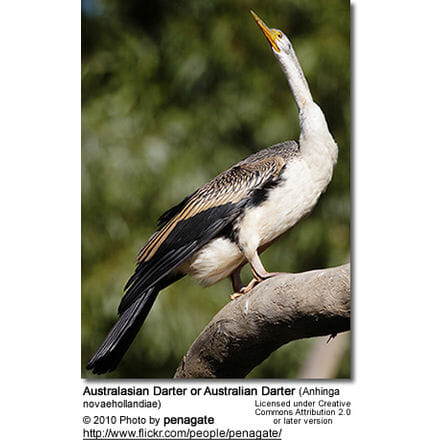 Their diet mostly consists of fish caught with their sharp bills while diving in waters deeper than 2 feet (about 60 cm).

They also feed on other aquatic animals (including tortoises), insects and some vegetable matter.

Smaller prey are eaten under water while larger fish are carried to a nearby perch and then swallowed.

Darters only remain together during the breeding season and will separate afterwards.

Breeding mostly occurs in spring and summer; but can occur throughout the year depending on availability of food to raise the young with.

They usually nest solitary, but may nest within loose colonies together with other water birds. The nests are typically situated in trees standing in water, and potentially in deeper waters if the waters begin to dry up. They are constructed out of twigs and decorated by the male with green leafy twigs. Males will display their nests to potential mates with courtship displays that entail elaborate wing-waving and twig-grasping movements. Once a bond has been formed, both will complete the nest, incubate the eggs and raise the young. Depending on the outside temperatures, the hatchlings are either kept warm by brooding them continuously, or they are cooled down by their parents shading them with their spread wings, shaking water over the young after a swim, or pouring water from their bills into the chicks’ gullets to prevent dehydration.

At four weeks, the chicks leave the nest and are able to swim, and they start to fly when they are about 50 days old.