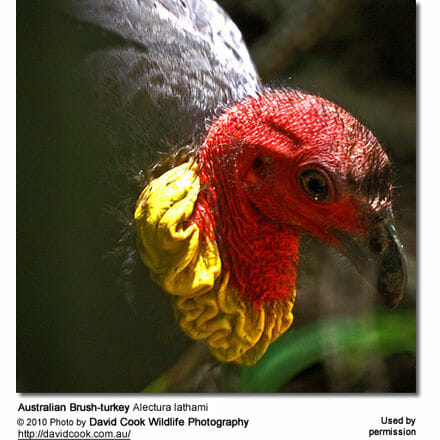 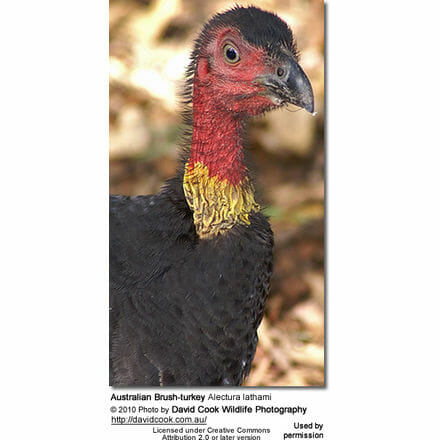 The Australian Brush-turkey Alectura lathami, also frequently called the Scrub Turkey or Bush Turkey, is a common, widespread species of mound-building bird from the family Megapodiida.

The Australian Brush-turkey is found in eastern Australia from Far North Queensland to Illawarra in New South Wales. It has also been introduced to Kangaroo Island in South Australia. It is the largest extant representative of the family Megapodiidae and is one of three species to inhabit Australia. Despite its name, the bird is not closely related to American turkeys.

In situations where they come into contact with humans, such as picnic areas in national parks, brush-turkeys exhibit little fear and will often boldly attempt to steal food from tables.

It is a spectacular large bird with a total length of 60-75 cm and a wingspan of about 85 cm. The subspecies A. l. purpureicollis from the northern Cape York Peninsula is smaller than the more widespread nominate subspecies.

It has a prominent, fan-like tail flattened sideways, and its plumage is mainly blackish, but with a bare red head, and a yellow (in the nominate subspecies) or purple wattle (in A. l. purpureicollis). The male’s wattle becomes much larger during breeding season, often swinging from side to side as they run. The males’ heads and wattles also become much brighter during the breeding and nesting season. The underside of the body is sprinkled with white feathers, more pronounced in older birds.

The Brush-turkey flies very clumsily with heavy flapping when it is frightened and roosts in trees at night and during the heat of the day. 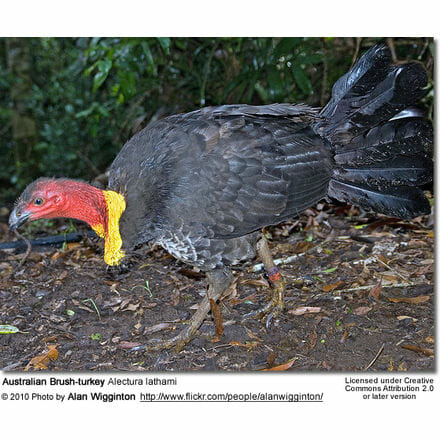 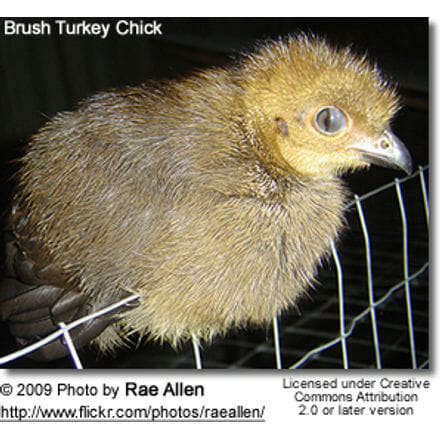 Brush-turkeys are communal birds, and have communal nests. A typical group consists of a dominant male, one or more younger males and several females. They build large nests on the ground made of leaves, other combustible material and earth, 1 to 1.5 metres high and up to 4 metres across. The eggs are hatched by the heat of the composting mound which is tended only by the males who regulate the temperature by adding or removing material in an effort to maintain the temperature of the mound in the 33-35°C incubation temperature range. The Australian Brush-turkey checks the temperature by sticking its beak into the mound. As with some reptiles, incubation temperature affects the sex ratio of chicks, which is equal at 34°C but results in more males when cooler and more females when warmer. It is unclear whether the parents use this to manipulate the sex of their offspring by, for instance, selecting the nesting site accordingly. Warmer incubation also results in heavier, fitter chicks, but how this is linked to gender is also unknown.

The same nesting site is frequently used year after year, the old ones being added to each breeding season. The average clutch of eggs is between 16 and 24 large white eggs, which are laid September to March. Sometimes up to 50 eggs laid by several females may be found in a single mound. The eggs are placed in a circle roughly 60-80 cm down, 20-30 cm apart, always with the large end up. The newly hatched young dig themselves out of the mound and then have to look after themselves.

They will nest in suburban gardens, and in search of material for their nests will patiently remove enormous amounts of mulch from neighbouring gardens.

Brush-turkey eggs are a favourite food of goannas, snakes, dingoes and dogs and once were a staple of Aboriginal Australians. Often goannas exhibit wounds on their tails of having been pecked by Brush-turkeys who ferociously chase them away from their nests. 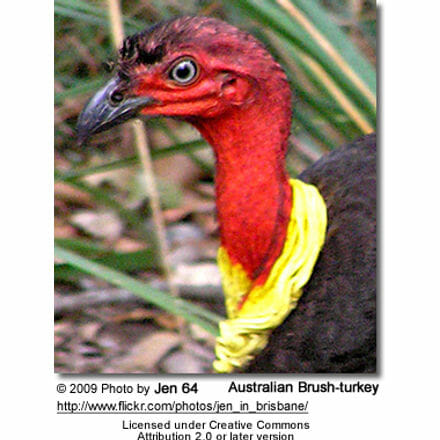 Songs about turkeys include: 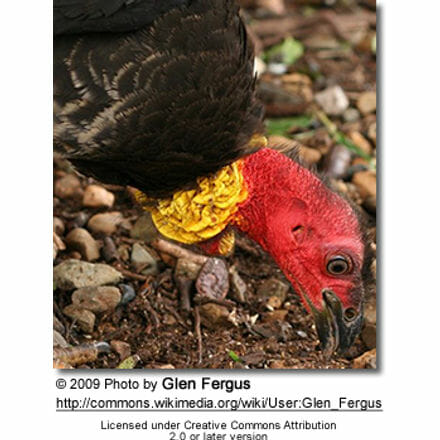 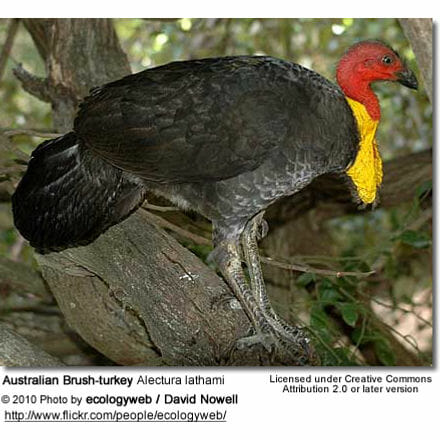