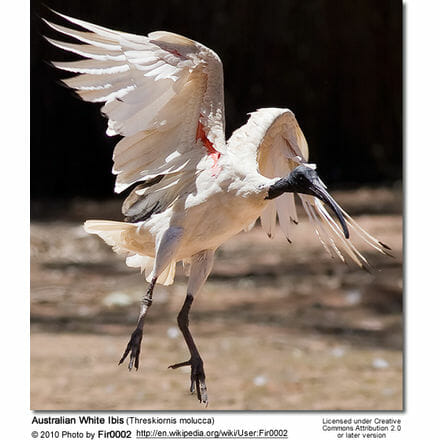 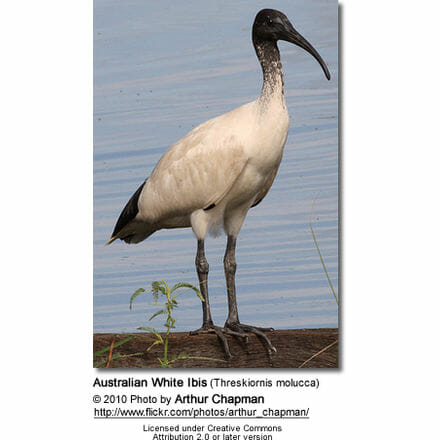 The Australian White Ibis (Threskiornis molucca) is also known as sheep bird, bin chicken, dump chook or tip turkey – from its habit of rummaging in garbage. The Yindjibarndi people of the central and western Pilbara refer to this bird as Mardungurra. Another common name is Sacred Ibis, but this can lead to confusion with the African Sacred Ibis.

This ibis is widespread across much of Australia.

The Australian White Ibis has a maximum lifespan of about 28 years old. It reaches reproductive maturity when it is about 3 years old. 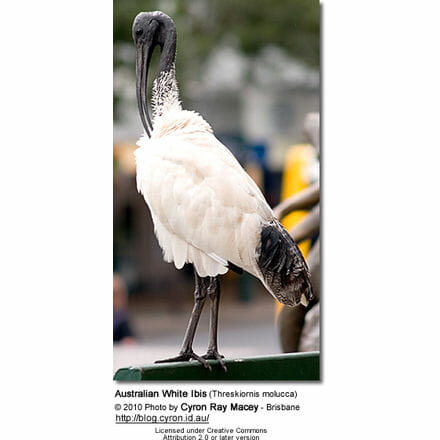 The Australian White Ibises occur naturally in eastern, northern and southwestern Australia. They historically inhabited shallow fresh and tidy marshy wetlands, tidal mud flats, swamps, lagoons, floodplains and open grasslands. Over time, they have also adapted to living in Australian east-coast city parks and even scavenging in rubbish dumps. They are now commonly seen in urban parks and gardens of Wollongong, Sydney, Perth, the Gold Coast, Brisbane and Townsville.

These large ibises are often seen in large flocks hunting their prey in grass or soil with their long curved beaks.

They are often observed in large flocks roosting in trees in or near water, bullrush beds and mangroves. Flocks of them are seen flying in wavelike lines or “V” formations. 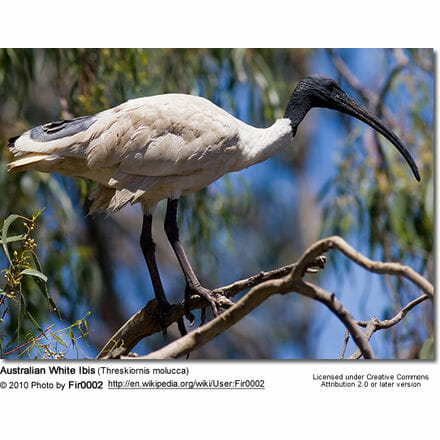 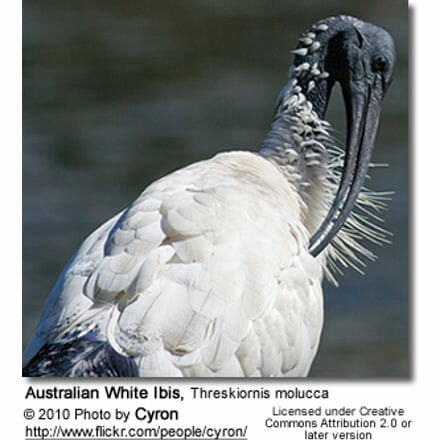 Its plumage is mostly white, except for the lacy black tail plumes and the black-tipped wings. The white plumage is often stained from foraging activities.

During the breeding season, the upper tail turns yellow; the small patch of skin under the wing changes from dull pink to bright red. They have space, stiff, yellowish/cream plumes hanging from the lower neck.

In flight, the neck is extended, the black wing tips are visible and the feet are trailing behind the tail feathers.

Females resemble the male, except for being slightly smaller and having a shorter bill.

Immature birds have shorter bills; and the head and neck are covered with black feathers. 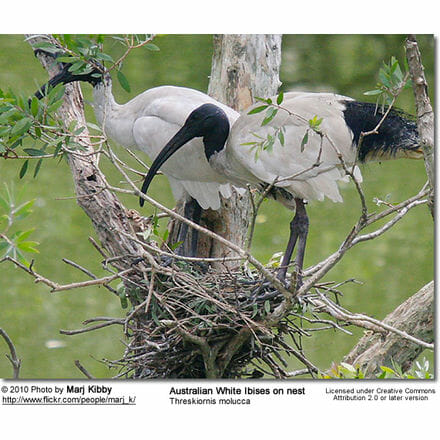 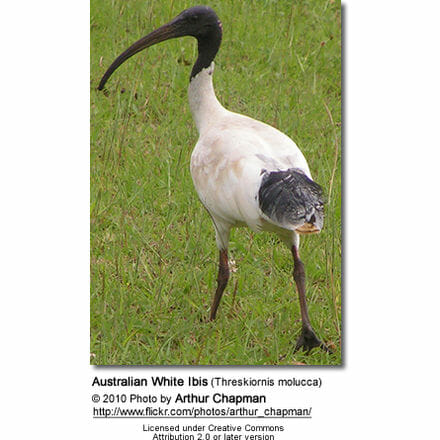 Most breeding activities in the southern part of its range occurs from August to November in the south, and in the north from February to May (after the Wet Season).

The male secures a pairing territory on a branch of a tall tree from which he will perform courtship ceremonies to attract willing females. He will attack other males that invade his chosen space.

As part of this noisy display, the male will bow the arriving females, offering her a twig and the willing female will take the twig and then mutual preening occurs.

Once a pair bond has been established, the pair will fly off to build their nest at a different location.

They often nest in large colonies – often with the related Straw-necked Ibis. At breeding time a male secures a territory on a branch in a tall tree where he puts on a noisy display and shows aggression to other males. When a female arrives, the male bows from the branch and offers a twig. If she accepts the twig, they begin mutual preening before flying off to build a nest elsewhere. They nest in large colonies, often with Straw-necked Ibis, or near other waterbirds such as egrets, herons, spoonbills or cormorants.

The nests are shallow cup-shaped platforms of sticks, grasses or reeds that are typically situated on trees near a body of water, such as rivers, swamps or lakes. However, this species has been known to nest in unusual places, particularly in urban settings.

The hatchlings are born naked and completely helpless. They leave the nest when they are about 48 days old.

The breeding adults may produce one or two broods in a year. 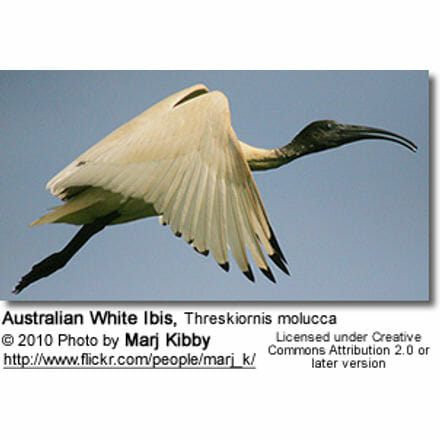 The Australian White Ibises mostly feed on fish, frogs and other water creatures, as well as on insects. They particularly favor crayfish and mussels, which they dig out of mud using their long bills. They open the mussels by hammering them on a hard surface to break open the hard shell.

They will also seek out human scraps, stealing food from park visitors, and scavenging on garbage dumbs.

The calls are described as drawn-out croaks. 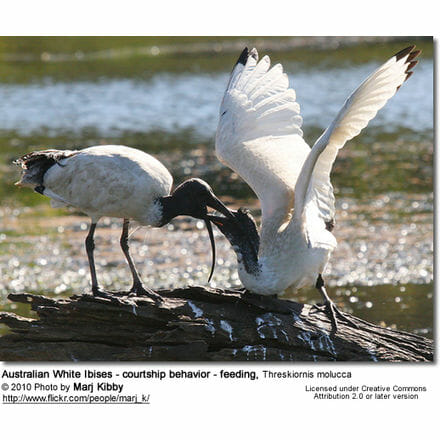