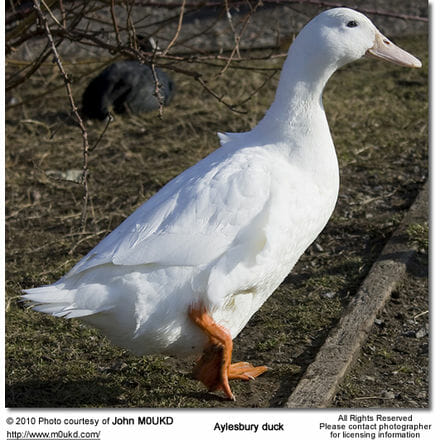 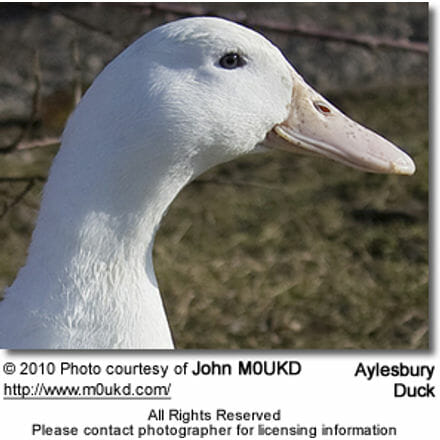 The Aylesbury duck is a recent addition to the duck family, bred mainly for its meat and appearance.

A true Aylesbury is a very rare and critically endangered in the U.S. The crossbred commercial meat-type of white duck is the bird most people will see and is the one most people mistakenly think of as an “Aylesbury” because it is white.

Unlike most other duck species, Aylesbury Ducks have pink, not orange, beaks.

The breed was developed around the early 18th century and became a cottage industry in Aylesbury in southern England. The ducks were walked to the markets in London, some forty miles (64 km) to the south, stopping at night at inns which provided large enclosed yards for a charge of a few birds. Each morning the feet of the birds were given some protection by driving them across a shallow ditch filled with cold tarry solution which made their feet sticky, then through sawdust which adhered to their feet. In 1839 the introduction of a railway connection made transport easier and the trade flourished, but around the middle of the century duck rearing in the town began to decline.

Following the introduction of the Pekin duck in 1873 the two breeds were often crossed, and the pure breed became rarer, but lately efforts have been made by breeders to re-establish the Aylesbury Duck. The breed is now farmed all over the world as the quality of meat obtained from the breed is particularly high.

The Aylesbury duck is the heraldic emblem of the town of Aylesbury, lent itself to the best bitter of the Aylesbury Brewery Company and to two pub names in the town.

The Aylesbury duck is bred mainly for its meat and appearance. Its plumage should be white, with a pink bill and bright orange feet and legs. The pink bill coloring is a vital and key characteristic of the true breed. Many people assume that every white duck is an “Aylesbury” but if the duck has an orange or yellow bill it will not be pure Aylesbury but will have some commercial “Pekin” strain somewhere in its background.

It is also one of the largest known breed of domestic ducks, although exceeded in weight by the Muscovy and equaled by the Rouen.

A true Aylesbury should have a horizontal carriage, this means that the keel of the bird should be parallel to and touching the ground when the bird is standing at rest. 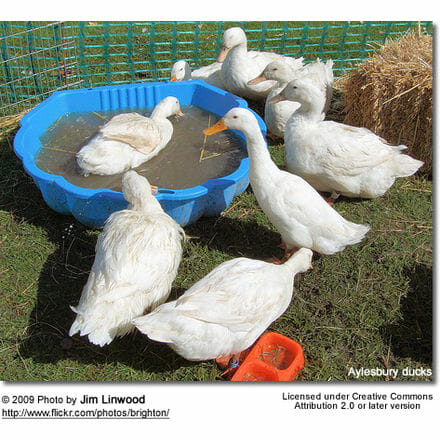 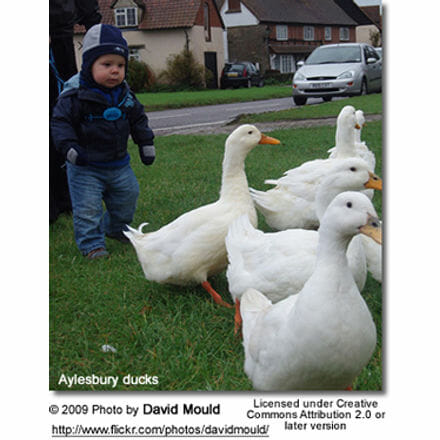