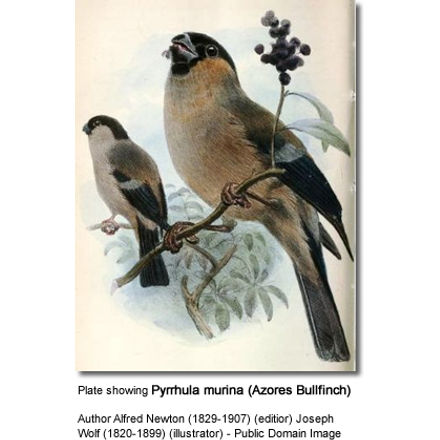 The Azores Bullfinch (Pyrrhula murina), also known as the São Miguel Bullfinch, or locally in Portuguese as the Priolo, is a critically endangered passerine bird in the true finch family.

It is endemic to São Miguel Island, in the Azores archipelago of Macaronesia in the North Atlantic Ocean.

The Azores Bullfinch was first described in 1866 by British ornithologist Frederick Godman. It was formerly regarded as a subspecies of the Eurasian Bullfinch (Pyrrhula pyrrhula), but was split off in 1993.

The bullfinch has a length of 15–17 cm and a weight of about 30 g, with males being slightly larger than females.

Relative to most other finches in its family it is plump, with shorter wings and a longer tail. The plumage pattern is similar to that of the Eurasian Bullfinch, though colouration is more sombre, lacking its bright pink underparts. It has a black cap, face, wings and tail; the rest being greyish or pale grey-brown. Males and females are virtually identical in appearance, though males may exhibit a faint pinkish suffusion on the belly and flanks.

The contact call is a distinctive short, flute-like, melancholic whistle.

The bullfinch is now largely restricted to a small area (c.580 ha) of native laurisilva forest at the eastern end of São Miguel, 300-800 m asl, mainly centred on Pico da Vara in the Serra da Tronqueira range, but also seasonally (September to December) around Salto do Cavalo, further westwards in the range, probably of juveniles following post-fledging dispersal. It has never been recorded from the western end of the island.

Breeding takes place from mid June to late August. Nests are built in dense vegetation in laurel forest, with two nests recorded as being 3 m above the ground, and are similar to those of the Eurasian Bullfinch.

Nests are double-layered with an outer layer of twigs and an inner one of grass, rootlets and moss. The clutch size is unknown. Young birds fledge from mid July, with the adults moulting from September onwards.

The bullfinches consume a wide variety of plant material, including seeds, fruits, flower buds, fern sporangia and fronds (unusual in birds), and moss tips, as well as some invertebrates such as hemiptera.

Native vegetation is preferred although, when the range was more extensive in the 19th century, the species was considered to be a pest in orange orchards around Furnas. Clethra arborea, a shrub once believed to be endemic to Madeira, but now known to have also existed in the past on the Canary islands (where it is considered extinct) raises up some questions about the way this plant should be treated in the Azores. First, there is a possibility it was native to he Azores several centuries ago, but disappeared there before it had any chance to be observed by a botanist, and then has been re-introdued in more recent times. Second, despite being currently considered an “exotic” species, it is a notable element of the bird’s diet and therefore plays some significant role in its survival.

The bullfinches move up and downslope through their range according to food availability during the year.

It is the most threatened passerine bird and the second rarest bird behind the Northern Bald Ibis in Europe. The population was once larger, and spread over a wider range, but both numbers and range have declined since the 1920s following the destruction of areas of its forest habitat for grazing and agriculture, as well as afforestation and invasion by introduced plants, especially Japanese Cedar.

The entire range of the species is protected as a Special Protection Area, the Pico da Vara / Ribeira do Guilherme SPA (a Natura 2000 site), under European Union legislation. The main approach to conserving the species is the protection and restoration of threatened native laurel forest vegetation.

.Copyright: Wikipedia. This article is licensed under the GNU Free Documentation License. It uses material from … Additional information and photos added by Avianweb.