Its habitat follows the Australian coastline from the top of the Northern Territory all the way down the east coast to and including Tasmania.

They are also found in the lowlands of New Guinea and neighboring islands, and out to North Maluku and Romang (east of Wetar Island).

They are often difficult to see until they quickly dart from a perch above water to catch their next meal.

Species occurring on mainland Australia meet along the east coast of Far North Queensland, between Cairns and Princess Charlotte Bay; and those found on New Guinea between Simbu Province and the northern Huon Peninsula, as well as south of Cenderawasih Bay. 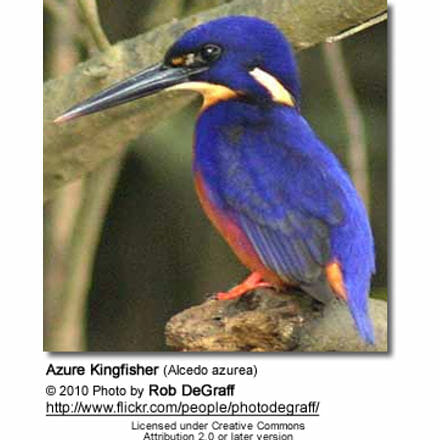 The Azure Kingfisher measures approximately 17 – 19 cm in length, including its tail.

This beautifully marked bird gets its name from its coloring: a startling, bright blue to azure on its head, wings and tail, and bright orange on its chest, abdomen and legs, with some blue-violet streaks on the chest and flanks. There are large white to buff spots on side of neck and throat.

The feet are red with only two forward toes.

Similar to other Kingfishers, the Azure Kingfisher sports a long, solid bill.

The Azure hunts in the same manner as most other Kingfishers do, by searching the water from a low-lying perch for its prey then diving swiftly, catching its prey and returning to its branch perch. It then flips the prey around until its head is in the bird’s mouth, thus enabling the bird to swallow it headfirst. They prefer small crustaceans such as crabs and yabbies (a freshwater crustacean similar to a crayfish). They will catch flying pray, such as insects, in the air.

They are specialists at diving deep into the water for their prey. They flight is quick and direct; and will often bob the head and wings in anticipation of spotting a fish.

The Kingfisher will stab its prey, either with the bill closed or open, depending on the size of the prey. They kill their prey by beating them on the ground or perch to shatter the bones. Then they work the fish into their mouths, head first, so that they won’t get cut up by the bones or scales as they swallow it whole. They will even consume snakes in this manner! 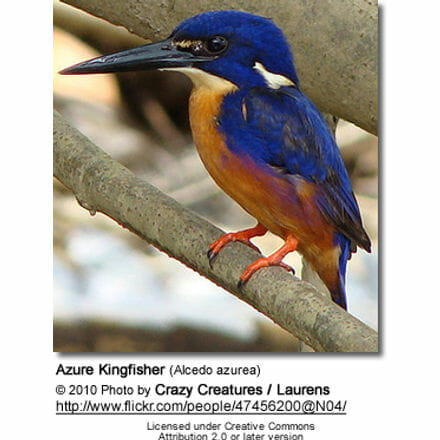 Azure Kingfisher pairs construct their nest together. They will take turns burrowing out a tunnel with their feet, and then they will hollow out a narrow chamber at the end of the tunnel in which to lay their eggs.

They spend three and seven days on the construction of the tunnel. Some of them have attacked their worksites so forcefully that they have fatally injured themselves as they fly into the tunnels during these excavations. The length of the tunnels vary by species and location.

If these kingfisher burrow into termitarium nests, the tunnels will generally be shorter. Nests built into the soil are usually longer. If these nests are constructed in hard, less penetrable ground, the tunnels will be shorter than those dug into sand or soft soil.

Kingfishers tend to be fiercely territorial in defense of their nests.

Nesting tunnels can reach 1 meter cm in length, and they will end in a nesting chamber, into which 5 – 7 glossy, white eggs are laid. Both parents incubate the eggs.

The young grow quickly. After hatching, they chicks are altricial (naked and helpless) and they require constant care and feeding by their parents, who bring the food into the nesting chamber.

But soon the nestlings are able to travel toward the entrance of the tunnel where they encounter the adults and wait to be fed. Eventually, they are fed on a perch near the entrance. Fledging can last a few days to a few weeks. After that, the chicks will be on their own and will feed themselves.

Both parents care for the young.

Its call is a high-pitched, shrill whistle that sounds like ‘pseet-pseet‘. It is similar to the vocalizations of the Little Kingfisher, except the latter’s call is higher pitched and weaker.