It is a widespread and common resident breeder throughout Russia and central Asia.

It is found in temperate and subarctic deciduous or mixed woodlands, scrub and marshes. It is resident, and most birds do not migrate.

This 12-13 cm bird is unmistakable. The head, tail corners, wing bars and underparts are white. There is a dark line through the eye, and the upperparts are blue.

This is the eastern counterpart of the common European Blue Tit. It will hybridise with that species, but the offspring usually show a blue crown, rather than the white of Azure Tit. 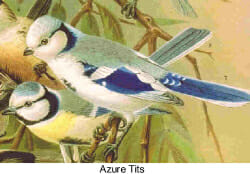 It nests in a tree hole, laying about 10 eggs. The bird is a close sitter, hissing and biting when disturbed. Its food is insects and seeds.

The calls are similar to Blue Tit, calling dee, dee, dee or a scolding churr. The song is a tsi-tsi-tshurr-tsi-tsi-tshurr, which has been described as intermediate between Blue Tit and Crested Tit.