Bank Myna (Acridotheres ginginianus) is a myna or starling occurring in South Asia. It ranges from Sind, Pakistan to Bangladesh. It is similar in colouration and shares its range with the Common Myna, but is slightly smaller.

The Bank Myna is found in Sind, Pakistan, on the West, covers the greater part of northern India, east to Bangladesh, southwards generally to latitudes of Mumbai, Maharashtra ie 19° North and Balasore,Orissa i.e. 21° North.

The Bank Myna is absent from the drier regions in Rajasthan. It has a patchy distribution but is most common in major river valleys.

Mostly resident, the bank myna shows regular seasonal local movements in some areas. Individual stragglers have been documented from as far as Kandahar, Afghanistan, and Chennai, India. The record from Chennai may have been an escaped cage bird.

The local names for the Mynah are:

The bank myna is found amongst rocks, in open country and around human habitations, often near tea stalls and markets, etc. Railway stations are particularly favoured. Commonly found in riverside habitats, the Hindi and Bengali names of the bird refer to this aspect.

A stocky, bluish-grey mynah with a deep orange bill and eye patches. Noticeably smaller and greyer than the Common Mynah. Other differences include:

Sexes of the Bank Myna are alike. The juveniles are paler and browner.

Bank Mynas are gregarious, and can be found in flocks even during the breeding season. These birds are usually very tame and confident. Often seen on railway stations, sauntering along platforms, in and out of the feet and baggage of passengers, picking up bits of food, they have been noticed in markets, such as Old Delhi, surreptitiously hopping onto vendors’ handcarts to steal scraps.

The voice is somewhat softer than that of the Common Myna. 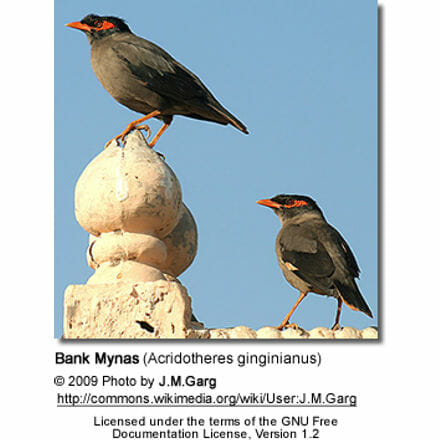 Bank Mynas eat fruit, grain, and insects. They can be very destructive to ripening crops of Sorghum (jowar). On the other hand, stomach contents of Bank Mynas in Bihar have recorded among other things, the larvae of the moth Ophiusa melicerte, which is highly injurious to castor.

Bank Mynas have a nesting season from April to August, with most birds nesting from May to June.

The nest is a pad of grass and rubbish, stuffed in the widened chamber at the end of a horizontal earth tunnel. These tunnels may be drilled in steep earth banks of rivers, sides of disused brick kilns, earthen wells,or even in masonry. The nests have been known include bits of sloughed off snake-skin.

Bank Mynas often breeds in colonies along with the Common Myna. Records of fifty or more pairs in a single colony are known.

The Bank Myna usually lays 3 to 5 eggs in a clutch. These eggs are a glossy pale blue.