The Barn Swallow (Hirundo rustica) is a small migratory passerine bird found in Europe, Asia, Africa and the Americas. It has a long, deeply forked tail and curved, pointed wings. It is often just called Swallow in Europe, although the term ‘swallow’ refers more widely to various members of the family Hirundinidae.

The North American subspecies H. r. erythrogaster differs from the European subspecies in having redder underparts and a narrower, often incomplete dark breast band. It breeds throughout North America, migrating to South America in winter.

Barn Swallows are similar in habits to the other aerial insectivores, including the other related swallows and martins and the unrelated swifts (order Apodiformes). They are not particularly fast flyers (estimated at about 11 m/s), but show remarkable manoeuvrability, necessary to feed on flying insects while airborne. They are often seen flying relatively low in open or semi-open areas.

Barn Swallows build neat cup-shaped nests constructed of mud collected in their beaks. The inside of the nest is lined with grasses, feathers and other soft materials. 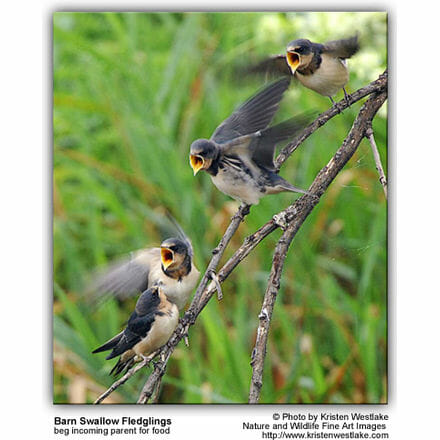 They normally nest in accessible buildings such as stables or under bridges and wharves. Before these types of sites became common, they nested on cliff faces or in caves. The female typically lays 4 or 5 eggs. Both parents build the nest and feed the young. Barn Swallows will swoop and attack intruders that venture too close their nest, often coming within inches of the threat.

The numbers in North America increased during the 20th century with the increased availability of man-made nesting sites. In recent years, there has been an ongoing gradual decline in numbers in parts of Europe and North America, due to agricultural intensification reducing the availability of insect food. However, it remains widespread and fairly common in most parts of its range.

In the film Monty Python and the Holy Grail, an open and hotly debated question is the airspeed velocity of an unladen swallow, for both African and European swallows, and whether they can carry coconuts or not.

Swallows are often seen in traditional naval tattoos as a symbol of good luck or homecoming, as the birds do not travel far from land, the sight of a swallow at sea meant landfall was imminent.