The Barred Owls (Strix varia) are large owls that are widespread in the majority of North America and a large part of the southern territory of Canada.

They are regionally known by a variety of names, including Swamp Owls, Rain Owls, Wood Owls, Black-eyed Owls, Round-headed Owls or Striped Owls.

However, the most popular common names for these birds are “Eight Hooters” – named so for their “Whoo-whoo-whoo, Wh-whoo, to-woo-ah“; or – in the southeastern United States, they are simply referred to as Hoot Owls for their deep hooting calls.

Their familiar and distinctive calls are described to sound like “who-cooks-for-you, who-cooks-for-you-all” or “”you-cook-today; i-cook-tomorrow“, and are said to be the simplest method of finding and identifying them.

Other names derived from their calls include Laughing Owl for their human-like “laughing” vocalizations.

These mostly nocturnal hunters are usually well hidden high up in dense foliage during the day, either roosting on branches close to broad tree trunks or in natural tree cavities.

Their excellent night vision and hearing enable them to locate prey in the dark and they catch them with a short flight or drop to the ground.

They are typically sedentary (non-migratory), except when they are forced to relocate due to harsh weather conditions, lack of food / water, modification of habitats (such as areas where logging reduced old growth habitats) or territorial disputes amongst crowded populations with overlapping ranges.

Barred Owls are partly blamed for the recent population decline of the endangered Spotted Owls.

The female is generally slightly larger in size and heavier.

Their head is large and round with a round, grey-white facial disc, dark brown eyes and greenish-yellow to dull-buff yellowish bill. They lack the ear tufts that are typically seen in other owl species.

The feathers on the abdomen or some owls are pinkish colored, and this may be attributed to a diet rich in crayfish.

Their legs and feet are covered in buff-white feathers up to the sharp talons. The legs and toes are feathered buff-white. The talons are dark horn turning blackish towards the tips. 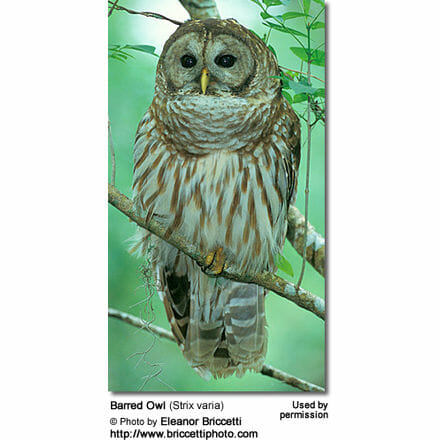 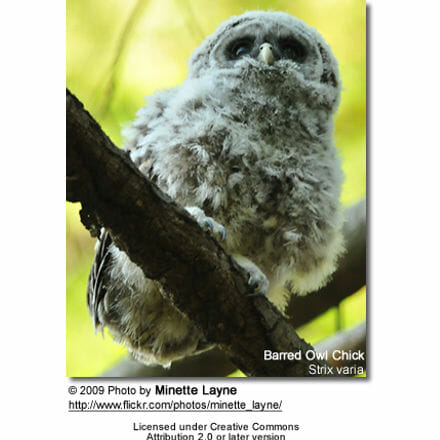 Males and females look alike; except females are usually slightly larger in size.

Hatchlings are covered with white down. At two weeks, they grow in a longer downy coat that is buffy at the base and white on the ends. There is light brown barring on the head, neck and the under parts. The wing feathers have broader bars that are a deeper brown in color and white tipped.

By their first winter, they have lost their down and are starting to resemble the adults. 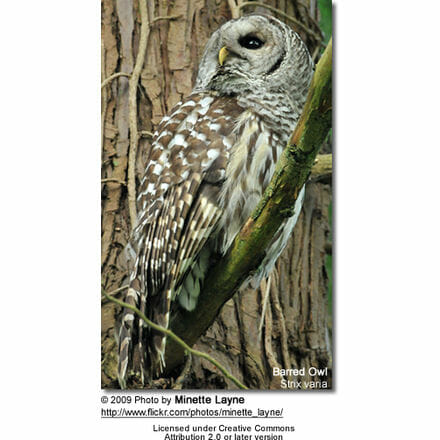 Those living near water will hunt frogs, toads, crayfish and small fish. They will wade knee-deep into water to capture fish or terrapins with their feet.

Birds are usually taken from their night roosts.

Mammals and insects are often taken from the ground. These olws swoop down on them from a high perch.

Most feeding happens near dawn or dusk; but may also hunt on cloudy days or even full daylight, when disturbed or when feeding chicks.

Small to medium-sized prey is devoured on the spot. Larger prey is carried to a feeding perch, where it is torn apart before eating.

Their stomach acids will digest the soft parts of their prey. The indigestible bones and hair are then regurgitated (thrown up) as pellets. 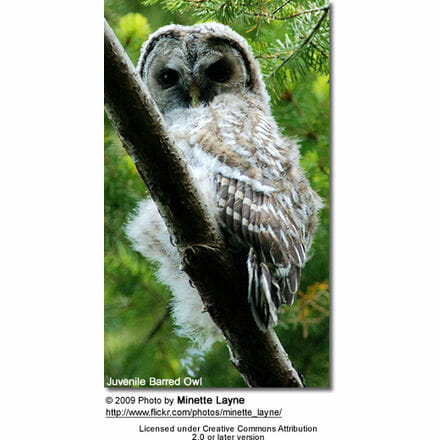 Barred Owls reach breeding age when they are about two years old.

In late winter, pairs will begin by calling to each other and responding. As they approach each other, they will perform a courtship dance, which involves nodding; bowing, spreading and raising their wings; as well as shaking their heads. Males will chase after females giving various hooting and screeching calls.

Prior to nesting, mutual preening and feeding occurs.

The nesting period starts in early January in southern Florida and in Mid-April in the northern parts. The breeding season usually goes on until August.

They generally prefer to nest in broken off snags or other large tree cavities, but may take over abandoned nests of squirrels, hawks, crows or accept suitable artificial nest boxes. In rare instances, they may nest on the ground.

Both parents will defend their nests aggressively and, provided that a nest site has proved suitable in the past, they will often reuse them over several breeding seasons.

The average clutch consists of 1 up to 5 white eggs (mostly 2 – 3), which are incubated by the female alone for 28 – 33 days, while the male brings food to the nest.

The hatchlings are covered in white down, blind and helpless. The female remains with them for about 3 weeks, while the male hunts and takes prey to the nest to feed the female and the young.

The nestlings’ eyes open when they are about 7 days old and they are usually ready to leave the nest when they are 4 – 5 weeks of age, when they crawl out of the nest using their beaks and talons to sit on adjoining branches (at this stage they are often referred to as “branchers”).

They start flying when they are six weeks old. The parents will continue to feed them until the young reach independence when they are about 6 months old.

Even though these birds usually only produce one brood a season, they will replace a lost brood that might have been taken by domestic cats or birds of prey, such as Great Horned Owls.

These birds are very vocal with various vocalizations, including particularly at night. Their calls include various hoots, whines, squeals, as well as sounding like barking dogs, whooping monkeys or the agonizing screams or laughter of humans.

Their best known call is described as a 9 syllable vocalizations ending in oo-aw, with a downward pitch at the end. By many, this call sounds like “Who cooks for you? Who cooks for you-all?”

When alarmed or agitated, they make buzzy, rasping hissing sounds. Mated pairs will call to each other “hoo-hoo, hoo-WAAAHH” and “hoo-WAAAHHH” and will duet to each other, although males tend to have deeper and mellower voices.

In the wild, these owls are expected to live up to 18 years. Captive specimens have been recorded to reach the age of 23.

The shorter lifespan in the wild is mostly related to man (roadkills, capturing in animal traps, shooting, etc.). Animals that prey on the eggs and young include cats, raccoons and weasels.

The most significant animal predator is the aggressive Great Horned Owl and to a lesser extent the Northern Goshawk, both of which will also prey on the adults.