Bean Geese – Everything to Know! 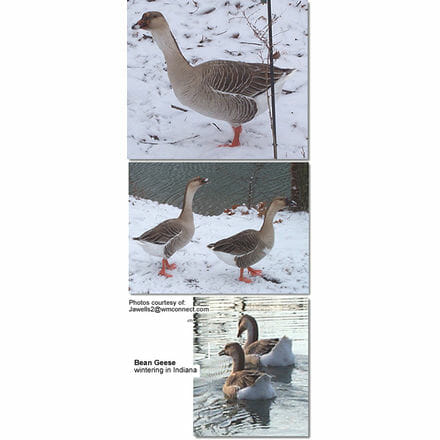 Its English and scientific names come from its habit in the past of grazing in bean field stubbles in winter (Latin faba, a bean).

They overwinter in the British Isles, southern Scandinavia, Germany, the Netherlands, and south to the Mediterranean Sea.

The bill is black at the base and tip, with an orange band across the middle; the legs and feet are also bright orange.

There are five subspecies, with complex variation in body size and bill size and pattern; generally, size increases from north to south and from west to east. Some ornithologists (including AOU 2007) split them into two species based on breeding habitat, whether in forest bogs in the subarctic taiga, or on the arctic tundra.

The closely related Pink-footed Goose (A. brachyrhynchus) has the bill short, bright pink in the middle, and the feet also pink, the upper wing-coverts being nearly of the same bluish-grey as in the Greylag Goose. In size and bill structure, it is very similar to Anser fabalis rossicus, and in the past was often treated as a sixth subspecies of Bean Goose.

The voice is a loud honking, higher pitched in the smaller subspecies.

The Bean Goose is a rare winter visitor to Britain. There are two regular wintering flocks of Taiga Bean Goose, in the Yare Valley, Norfolk and the Avon Valley, Scotland. A formerly regular flock in Dumfries and Galloway no longer occurs there. Tundra Bean Goose has no regular wintering sites, but is found in small groups among other grey goose species – among the most regular locaities are WWT Slimbridge, Gloucestershire and Holkham Marshes, Norfolk.

Bean Geese reach breeding age when they are about 2 – 3 years old, with breeding typically starting in the spring / summer of their third year.

They typically nest at the foot of a tree or next to a fallen trunk.

The average clutch consists of 3 – 7 eggs, which are incubated for about 28 days.