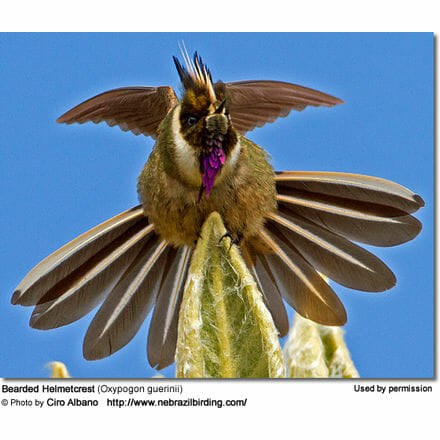 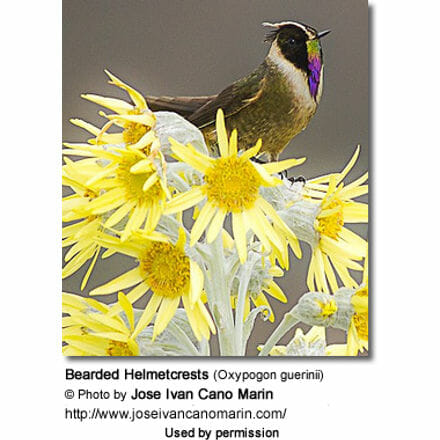 The Bearded Helmetcrests (Oxypogon guerinii) – also known as Linden’s Helmetcrests – are large hummingbirds found in the South American countries of Colombia and Venezuela.

They are related to the Bearded Mountaineer (Oreonympha nobilis) and the Rufous-capped Thornbill (Chalcostigma ruficeps).

Their preferred breeding habitat is the páramo – high-altitude subtropical or tropical high-altitude grassland. After the breeding season (the dry season), they descend to the treeline. They are often seen perching on boulders.

As is typical of hummingbirds, they are mostly solitary and spend their days alone foraging in low bushes. However, during the non-breeding (dry) season, several of them may be observed. 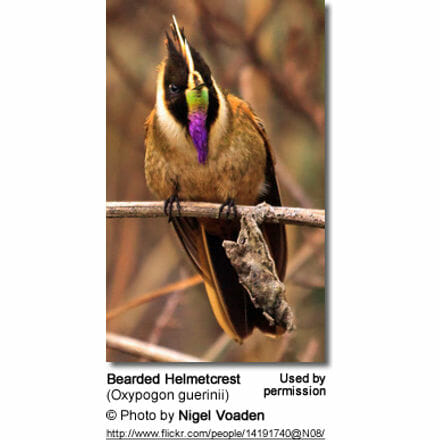 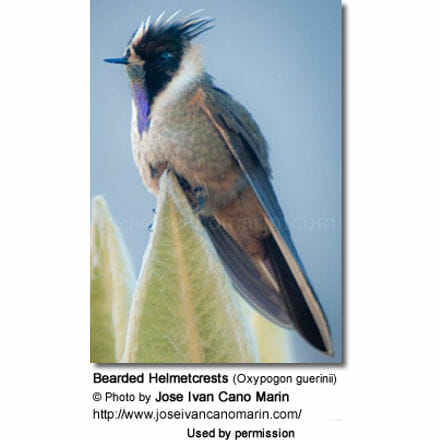 Bearded Helmetcrests are easily identified by the long, pointed crests and black and white beards. The face is black except for a blue, green or orange central stripe. There is a pale collar around the face down to the chest. 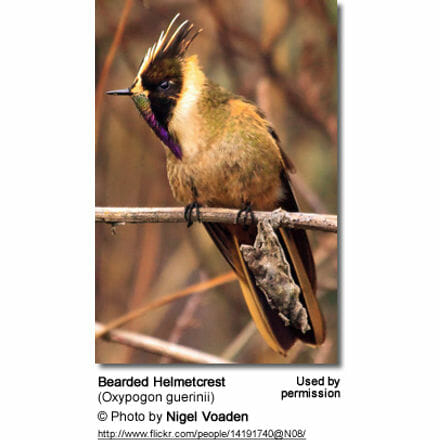 Bearded Helmetcrest Hummingbirds breed during the rainy season. During this time, males sing continuously as they seek to attract females.

The male’s only involvement in the reproductive process is the actual mating with the female. They neither live nor migrate in flocks; and there is no pair bond for this species. Males court females by flying in a u-shaped pattern in front of them. He will separate from the female immediately after copulation. One male may mate with several females. In all likelihood, the female will also mate with several males. The males do not participate in choosing the nest location, building the nest or raising the chicks.

The female is responsible for building the cup-shaped nest out of plant fibers woven together and green moss on the outside for camouflage in a protected location in the daisy Espeletia or builds a nest of material from the daisy plant in a cliff or bank.

She lines the nest with soft plant fibers, animal hair and feather down, and strengthens the structure with spider webbing and other sticky material, giving it an elastic quality to allow it to stretch to double its size as the chicks grow and need more room. The nest is typically found on a low, skinny horizontal branch.

The Bearded Helmetcrest Hummingbirds primarily feed on nectar taken from a variety of brightly colored, scented small flowers of trees, herbs, shrubs and epiphytes. They favor the flowers of the genera Espeletia, Echeveria, Siphocampylus, Castilleja and Draba. They use their long, extendible, straw-like tongues to retrieve the nectar while hovering with their tails cocked upward as they are licking at the nectar up to 13 times per second. Sometimes they may be seen hanging on the flower while feeding.

When foraging, they typically cling onto flowers or sometimes walk on the ground as they search for insects.