South American Bellbirds (or simply ‘bellbirds’) are members of the cotinga family that are mostly found in South America. In some parts of their range, they are sometimes referred to as “araponga.”

Species and Their Ranges

Genus ProcniasThree of the four species are restricted to South America, while the last, the Three-wattled Bellbird, is restricted to southern Central America. 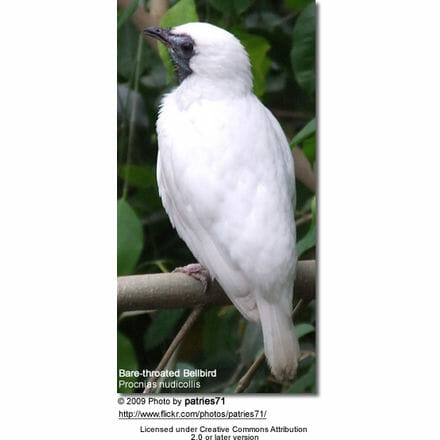 These bellbirds are strongly sexually dimorphic.

Males have an at least partially white plumage, as well as distinctive facial wattles or bare facial skin.

Females are mostly olive-colored with yellowish streaks below. They lack the wattles or bare facial skin that can be seen in the male.

The bellbirds are known for their loud calls; although only one, the White Bellbirds (Procnias alba), have calls that can actually be described as “bell-like.”

Only the male vocalize. In breeding season males give resonant, far-carrying boing sounds, often preceded by piercing whistles or twangs.

The calls of some Procnias males are thought to be among the loudest bird calls on Earth – audible to humans from over 0.5 mi (0.80 km) away.

They are all restricted to tropical or subtropical humid forested regions, often in low mountains or foothills.

A large part of their diet consists of fruits and berries, as well as various plantmatter and seeds.

Their short bills with a wide gape are adaptations for gorging on quantities of fruit.

The nest is built on open branches.

One or two eggs are laid per clutch. The female cares for the young alone, regurgitating fruit and cleaning the nest of fecal sacks and regurgitated seeds.

The chicks leave the nest at 33 days, and take three years to come into full color.

Other bird species known as “Bellbirds”: