The Belted Kingfishers reside near waterways, and are often seen hovering over water diving to catch a fish. They will emit loud, rattling cries just as they go into the dive.

Their closest living relatives are the Ringed Kingfisher, and these two likely originated from an African Megaceryle, which colonized the Americas.

Their breeding habitats are typically near inland bodies of waters or coasts across most of Canada, Alaska and the United States.

For the winter, those occurring in northern areas, migrate south to the southern United States, Mexico, Central America, the West Indies and northern South America. A few individuals may linger in the north even in the coldest winters except in the Arctic, if there are remaining open bodies of water.

Accidental visitors have been reported on oceanic islands, such as Clarion, and very rarely they have been spotted in Iceland, Ireland and Britain. 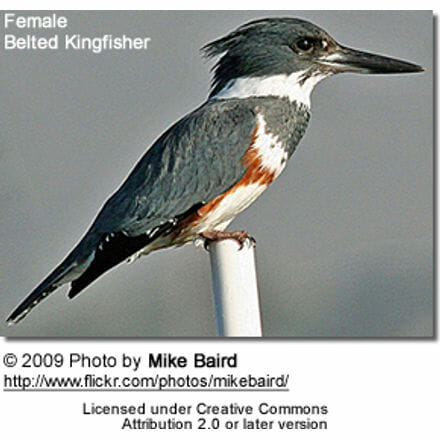 This species is short and compact, with a large head, a shaggy crest; and a long, heavy bill that is black in color with a grey base and shaped like a dagger.

This kingfisher shows reverse sexual dimorphism, meaning the female is more brightly colored than the male – which is rarely seen in birds.

The female is short and compact, with a shaggy crest. The female has a slate-blue area above her white collar and displays two bands on her breast. The upper band is blue, and the lower band is a reddish-brown. The back and wings are slate blue with black feather tips with little white dots.

The male has the same body build and bill structure as the female, but his chest and belly are white with a single blue breast band. 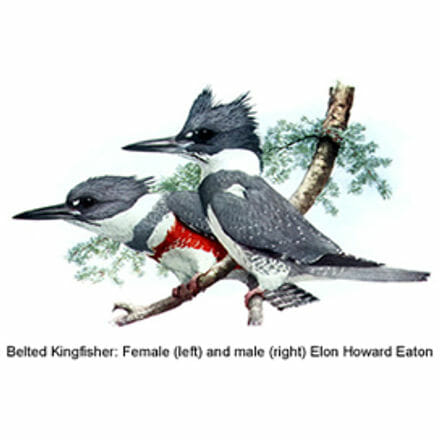 Both male and female Belted Kingfishers build the horizontal tunnel that will be their nest in a riverbank or sand bank.

This nest is situated by streams and often slopes uphill. It is thought that the upward slope will prevent the chicks from drowning should the tunnel become flooded. The air pocket formed by the elevated end of the tunnel will protect them in that case.

The female lays five to eight eggs; both adults incubate the eggs and feed the young. 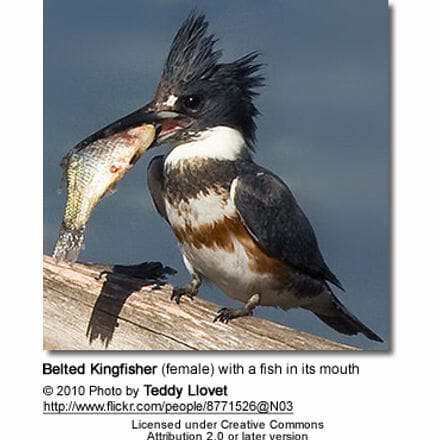 They will perch on trees, posts, or any other place close to the water.

Their dark brown eyes are able to see colors distinctly and are even capable of binocular vision. They are able to move their eyes within the eye sockets rather than having to rotate their entire heads to follow their prey. An unusual adaptation they possess is the ability to compensate for the water’s refraction and reflection as they search for prey underwater.

This makes the fish look closer to the surface than it is. They have accurate depth perception as well. Nature has provided the Kingfisher with a great deal of ocular protection. Their nictitating membranes protect their eyes when they hit the water.

The Kingfisher will stab its prey, either with the bill closed or open, depending on the size of the prey. Kingfishers kill their prey by beating them on the ground or perch to shatter the bones. Then they work the fish into their mouths, head first, so that they won’t get cut up by the bones or scales as they swallow it whole. They will even consume snakes in this manner!

These birds often give a rattling call as they fly overhead.

Its call is a loud, penetrating rattle given on the wing and when perched.