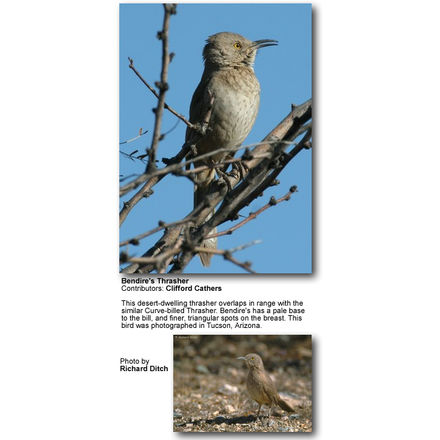 Bendire’s Thrasher (Toxostoma bendirei) a perching bird native to the southwestern United States and northern Mexico, is a medium-sized species of thrasher.

Bendire’s Thrasher is 23-28 cm (9 to 11 inches) in length, with a long tail and a short bill. It is colored grayish-brown on its upperparts and has paler underparts with faint dark streaks. The eyes are bright yellow, and the tips of the tail are tipped with white.

Similar Species: Because of its similar coloration to the Curve-billed Thrasher, the two birds are very easy to mistake for one another. The Bendire’s Thrasher’s shorter beak is a distinguishing feature when comparing mature birds, but it is still easy to misidentify an adult Bendire’s Thrasher as a young Curve-billed Thrasher as its beak has not grown to its mature length.

The Bendire’s Thrasher lives in the brush-filled deserts and valleys and drylands of the south-western United States, mainly along the southern border that Arizona and New Mexico shares with Mexico, (the Madrean sky islands, mountain range sky islands of the northern Mexican range: Sierra Madre Occidental). 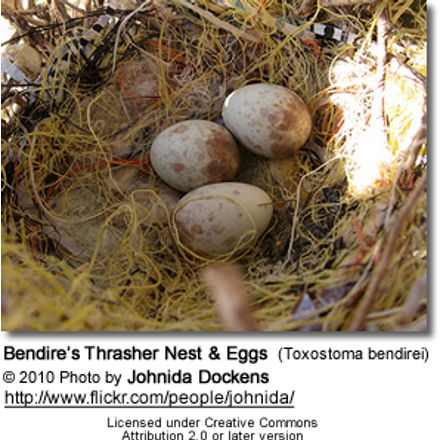 The Bendire’s Thrasher constructs a cup-shaped nest from twigs, lining the interior with grass stems and rootlets. It is usually placed in a cactus or an otherwise thorny desert shrub or tree.

The female lays three or four eggs, which are pale green to blue in color, and speckled with brown and purple.

Bendire’s Thrasher, like the majority of thrashers, feed on small ground-dwelling insects.

On July 28, 1872 U.S. Army Lieutenant Charles Bendire was on a hike through the brushy deserts near Fort Lowell, Arizona. While exploring the desert Bendire, an avid bird enthusiast, spotted a bird that was unfamiliar to him. Lieutenant Bendire shot the bird, which appeared to be a female thrasher, and sent its remains to the Smithsonian Institute in Washington, D.C.

The remains of the specimen were examined by Elliott Coues, who was perplexed to its species. After several of Coues’s colleagues looked at the bird they believed it was just a female Curve-billed Thrasher, but Coues did not agree with that conclusion. Coues believed that the thrasher was a species that was yet unknown to science and sought out Bendire for additional information on the bird. Bendire replied to Coues with his affirmation that he also believed that it was a new species.

Lieutenant Bendire soon sent back a second specimen of the thrasher, a male, and details about its habits and eggs, all which were different from those of a Curve-billed Thrasher. Finally convinced, Coues named the new thrasher species Bendire’s Thrasher in the honor of Charles Bendire. 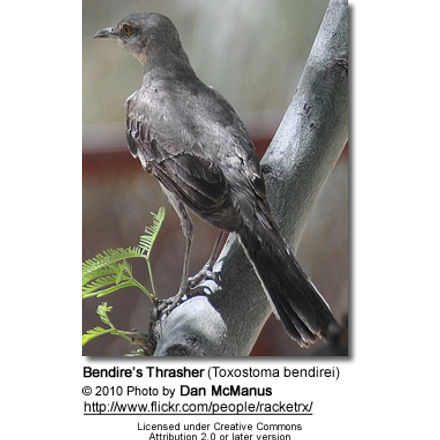