The Black Baza (Aviceda leuphotes) is a small sized bird of prey found in the forests of South Asia and Southeast Asia. Many populations are migratory.

The races in the Indian region are migratory, wintering in the south of the Peninsula and Sri Lanka. The Black Bazas have short, stout legs and feet with strong talons.

A prominent crest is a feature of the Bazas. They are found in dense forest often in small groups.

They are also known to spend a lot of time perching on open perches overlooking forest canopy. 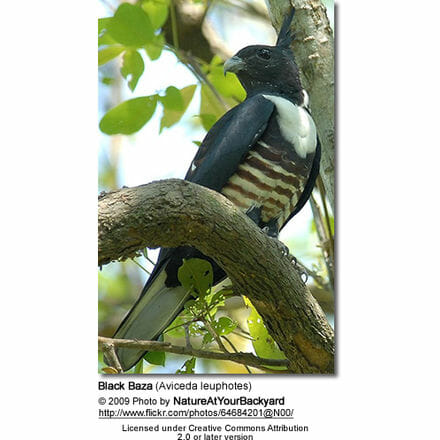 The Black Baza is a small and distinctively colored raptor. When perched, the upright crest and contrasting patterns make it difficult to misidentify.

The female has white only on the scapulars (shoulder feathers) and more chestnut bands on the underside unlike the few bands in the male.

In flight it is crow like and is often seen in small groups or flocks during migration. During migration, they are gregarious at their roost.

They feed mainly on insects by making aerial sallies. They have been noted to join mixed-species foraging flocks. It has also been known to feed on the fruits of the oil palm. They are somewhat crepuscular in habit. The call is a “chu-weep” somewhat similar to the call of the Large Cuckoo-shrike.

Like others in the genus Aviceda they have two tooth like indentations on the edge of the upper bill. 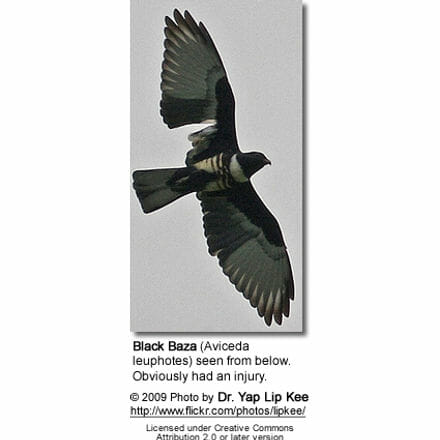 The bird was first described based on a specimen from Pondicherry under the name of Falco leuphotes. Several geographic races have been described including wolfei which is based on a single specimen from Sichuan and may belong to the nominate subspecies.

The named forms include the following but have been questioned and further study has been called for:

This species is found in Southeast Asia and parts of South Asia. They are migratory in parts of their range. Migratory birds may be seen in large numbers at some locations such as Chumphon in Thailand where they account for nearly 40% of the raptors on passage.

In some parts of Hong Kong, they have established themselves in recent times changing from summer visitors to residents in small numbers.

In India the species is regularly reported in winter from the Western Ghats (breeding records have been questioned), Eastern Ghats (mainly on spring passage) and known to breed in northeastern India and Burma.

Winter records of the species include stray occurrences in or near metropolitan areas such as the Guindy National Park in Chennai, near Trivandrum and Bangalore.

More recent studies have suggested that the species may be a regular winter visitor in the eastern part of peninsular India, and not just a passage migrant.

The birds in northeastern India begin to breed in April. Both sexes take part in nest building, incubation, brooding and feeding. The eggs take about 26–27 days to hatch. Insects are the predominant food of the chicks.