The Black-billed Streamertail Hummingbirds (Trochilus scitulus) are only found in the very eastern parts of Jamaica. Some authorities consider them a subspecies of the Red-billed Streamertails; however, based on differences in bill coloration and width, as well as behavioral differences, most separate them as different species.

These birds are also known as Swallow-tails, Swallow-streamers, Streamer-tails or Scissor-tails – for their long, ribbon-like tail feathers, which far exceed the male’s body in length; or Eastern Streamertails, differentiating them from the “Western” Red-billed Streamertails that occur in the more western part of the island.

However, for historical reasons, the Streamertail Hummingbirds – including their cousins, the Red-billed Streamertails, are commonly referred to as Doctor Bird or Doctor Hummingbird. The origin of this nickname is disputed.

Most attribute it to the erect black crest and tail that resemble the old-fashioned top hat and long tail coats doctors used to wear. Others state that this name originates from the way these birds pierce the flowers with their bills to extract nectar.

Black-billed Streamertails are only found in Jamaica, where they are quite common west of a line from Morant Bay following the Morant River, and via Ginger House and the middle Rio Grande to Port Antonio.

Their ranges overlap with the very similar Red-billed Streamertails between the Blue Mountain and John Crow Mountain ranges in eastern Jamaica where these two species interbreed.

They are resident (non-migratory) within their range. 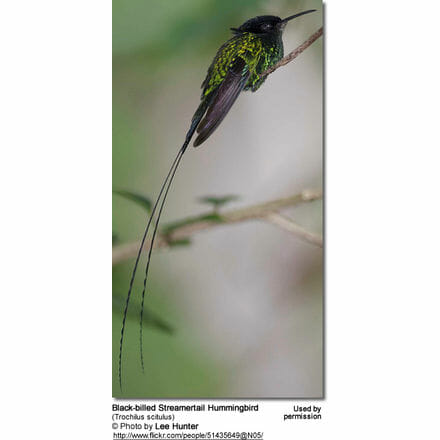 The Black-billed Streamerbirds measure about 3.25 – 3.5 inches (9 – 10 cm) in length; the long tail feathers of the males (streamers) add another 6 – 7 inches (15 – 18 cm). Male Streamertails have the longest tail feathers of any hummingbird. Both males and females have long, black bills that are slightly curved down.

Adult males have a mostly glossy emerald green body (paler on the back); a black head and black, iridescent throat. The black wings and tail are edged in green. The second to outermost tail feathers are elongated to form “streamers”, which are often crossed like the old-fashioned coattails of doctors – hence, Jamaicans refer to them as the “Doctor birds.” These long, black tail feathers trail behind them in flight making a humming sound.

There are lateral crown feathers that are elongated behind the nape forming ear tufts.

The female is green above, except for the grey-brown head, and the white plumage below with dark green sides and some slight spotting on the side of the throat. She lacks the long tail feathers of the male; instead, these outer tail feathers are tipped white. 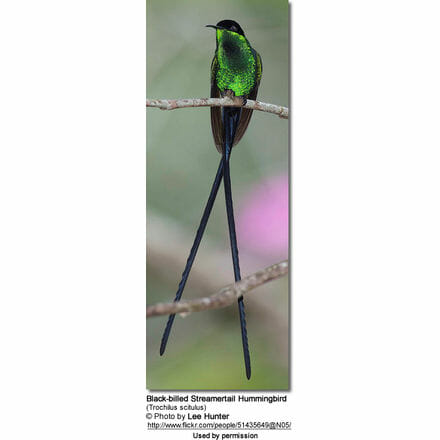 Black-billed Streamertailsprimarily feed on nectar taken from a variety of brightly colored, scented small flowers of trees, herbs, shrubs and epiphytes. They favor flowers with the highest sugar content (often red-colored and tubular-shaped) and seek out, and aggressively protect, those areas containing flowers with high energy nectar.

Thanks to the island’s temperate climate, breeding occurs throughout the year; however, most nesting activities are observed between April through June. Males attract females by waving and showing off his long his streamers.

The female is responsible for building the tiny cup-shaped nest out of plant fibers woven together and green moss on the outside for camouflage in a protected location in a shrub, bush or tree (or as can be seen on the image to the right – they may take advantage of man-made structures). She lines the nest with soft plant fibers, animal hair and feather down, and strengthens the structure with spider webbing and other sticky material, giving it an elastic quality to allow it to stretch to double its size as the chicks grow and need more room. The nest is typically found on a low, skinny horizontal branch.

The average clutch consists of two bean-sized, white eggs, which she incubates alone for about 14 to 20 days, while the male defends his territory and the flowers he feeds on. The young are born blind, immobile and without any down. The female alone protects and feeds the chicks with regurgitated food (mostly partially-digested insects since nectar is an insufficient source of protein for the growing chicks). The female pushes the food down the chicks’ throats with her long bill directly into their stomachs.

As is the case with other hummingbird species, the chicks are brooded only the first week or two, and left alone even on cooler nights after about 12 days – probably due to the small nest size. The chicks leave the nest when they are about 3 weeks old.

Red-billed Streamertails can produce 1 to 3 broods per year.

The calls of the Black-billed Streamertails are described as sharp, loud, high-pitched teeet-teeet or tee-tee-tee; or loud, metallic-sounding “chink-chink” or “‘ting, ting.”

Their voices are commonly heard on the island. The long tail streamers of the males are scalloped and fluted on the inside, creating high whining humming sounds in flight.