The Black-capped Vireo, Vireo atricapillus, is native to the United States and Mexico.

Its range is shrinking and much-fragmented, mostly due to human impacts, such as human development, agriculture and fire suppression.

The male and female in a pair assist in nest construction and incubation. The female broods the young, while the male supplies most of the food during the nestling phase. Typically, three or four eggs are laid.

Breeding pairs are capable of producing more than one clutch per breeding season. The male cares for some or all of the fledglings, while the female re-nests – sometimes with another male. 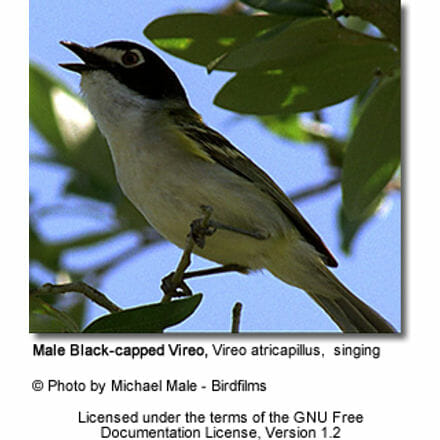 Junipers seem to be of little or no importance. Foliage that extends to ground level is the most important requirement for nesting.

Most nests are between 15 and 50 inches (35-125 cm) above ground level and are screened from view by foliage. Territories are sometimes located on steep slopes, where trees are often clumped and intermediate in height.

On level terrain, preferred Black-capped Vireo habitat is a mixture of shrubs and smaller trees that average from eight to 10 feet high (2.5-3.5 m). Black-capped Vireos will no longer use sites where many trees are nearing full size.

The Black-capped Vireo is a songbird about 4.5 inches or 12 cm in length.

Sexually mature males are olive green above and white below with faint yellow flanks. The crown and upper half of the head is black with a partial white eye-ring and lores (the region between the eye and bill on the side of a bird’s head).

The iris is brownish-red and the bill is black. First year males are intermediate in coloration between adult males and females.

Females are duller in color than males and have a slate gray crown and underparts washed with greenish yellow.

As if to compensate for a crypic lifestyle and cryptic habitat, many species of vireos are notable for their vocal complexity.

Most species have repertoires consisting of many songs, ranging from about a dozen to over 100 in some species. Many are persistent singers, delivering songs throughout the day.