The Black-crowned Night Herons (Nycticorax nycticorax) – often simply referred to as Night Herons in Europe – are the most widespread herons in the world. They are found on all continents except Australia and Antarctica.

They are closely related to the Australian Nankeen Night Herons with which they are known to have hybridized in areas where their ranges overlap – namely, the islands of Java and Sulawesi in Indonesia, and the Philippines.

As suggested by their common name, these herons are most active during the night and are usually resting in trees or bushes during the day.

Their nocturnal habits may have their origin in these birds wishing to minimize competition for food with other water birds; or to avoid harassments from other birds that are aware of the night herons’ habits of feeding on their eggs and young, and have, therefore, learned to attack night herons on sight. 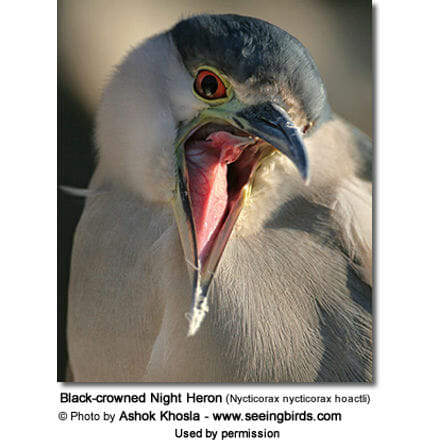 Their range spans across five continents, including the Americas, Europe, Africa and Asia.

Populations found in tropics are generally resident; however, those breeding in the northern parts may migrate south for the winter.

Migration patterns vary depending on their range, however, those occurring in the Americas migrate to their breeding grounds from February to May. From July through October, they generally travel back to their wintering territories. The migration is typically done in large flocks and almost exclusively during the night.

They breed in fresh and salt-water wetlands, including marine islands, swamps, wooded streams, rivers, canals, marshes, mud flats, tropical mangroves, and the edges of lakes and ponds that have become overgrown with rushes and cattails. They have also been observed in agricultural fields and suburbs of large cities.

They generally remain close to water and favored vegetation, such as trees, mangroves and reeds – where they roost, feed and breed. 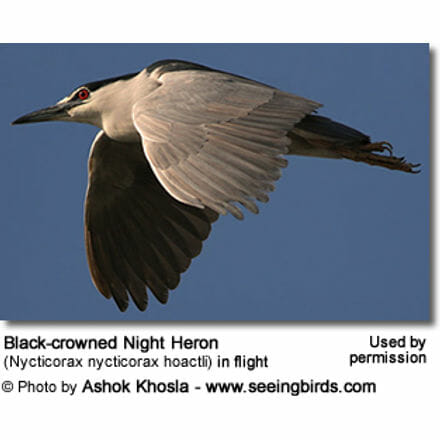 Population declines in the late 1960s were attributed to the use of DDT (an agricultural insecticide). Additionally, Black-crowned Night Herons are hunted for food, in particular the young birds; or they are trapped and killed at fish farms, where these birds compete for the fishy prey. Those nesting close to human settlements are also considered pests by some. However, alternate methods have been put in place to manage many problems associated with these birds, without the need to slaughter them.

In recent history, they share the same threads as most other water birds: loss / destruction of their wetland habitats, water pollution and the overuse of pesticides. 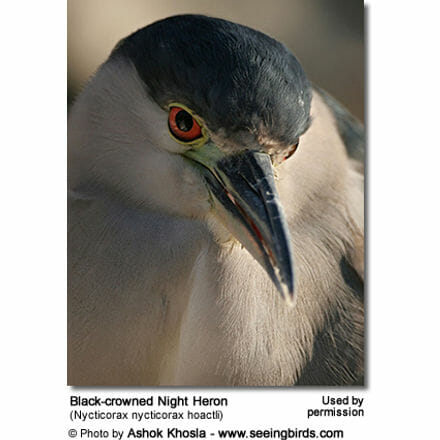 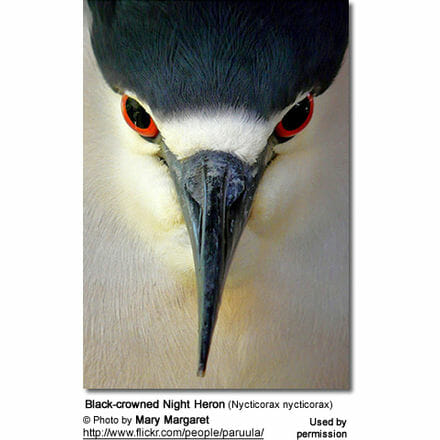 Their tri-colored plumage sports a black crown and back, pale blue-grey wings and tail, whitish eye brows and lores (area between the beak and the bill), and whitish underparts.

The eyes are bright red; and the short legs and feet are yellowish-green in non-breeding birds and pinkish-red when breeding. The black bill is slightly curved downward.

Males and females look alike, except females tend to be a little smaller in size.

Breeding birds grow two or three long white plumes on their heads (on the nape – lower back of the neck) that are erected during greeting and courtship displays. The black feathers on the head and back take on a bluish-green gloss. The legs turn pinkish red in color.

When hunting, they extend their necks.

When resting, they are usually somewhat hunched, as the head is tucked down into the shoulders.

Movements in Water: They are fairly good swimmers and are able to land on the surface of water.

In flight, the white underparts are most obvious; the neck is tucked in close to the body so that the head and back from a straight line, and the short legs barely extend barely beyond its tail. The arched wings move in deep strokes. They can fly 20 to 35 miles (~32 – 56 km) per hour. 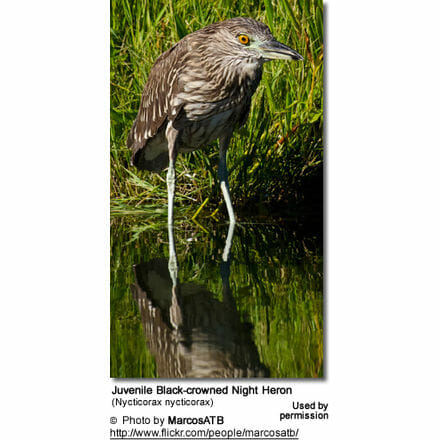 Birds younger than one year have a duller dark grey-brown plumage except for pale spots on the darker wings; broad, white streaks on the brown head; and indistinct brown spots and streaks on the paler underparts. The legs are dull grey (sometimes described as yellowish-green). The bill is orangey-yellow.

Juveniles first have grey eyes, turning yellow over the first year and finally red as adult.

When they are about two years old, their crown and back turn brownish-black; the rest of the body is brown and faint streaking can be seen below.

They reach their adult plumage when they are about 3 years old, at which point they also reach breeding age.

Adults resemble the Yellow-crowned Night Herons and the American Bitterns, but can be identified by their white underside.

Yellow-crowned Night Herons are grey below and the American Bitterns are cream-colored below with chestnut stripes.

Young birds can be confused with juvenile Striated or Little Herons (Butorides striatus) or the Cinnamon Bitterns (Ixobrychus cinnamomeus); however, the Black-crowned juvenile can be identified by the spots on the back, their stockier shape and robust beaks.

Black-crowned Night Herons primarily feed on small fish. However, these opportunistic feeders will also take frogs, aquatic and terrestrial insects, leeches, earthworms, crayfish, mussels, squid, reptiles (lizards, snakes), small mammals (rodents), plants, and even carrion and garbage at landfills. They will also take the eggs and nestlings of colonial-nesting waterbirds, such as terns, herons and ibises, and hunt small birds.

Most feeding occurs in shallow waters, where they grasps their prey with their bills, rather than stabbing them as other water birds tend to do. One of the techniques they utilize to attract prey is referred to as “bill vibrating” – they will open and close the bill rapidly in water, which creates a disturbance that lures prey. They may also stand motionless in water for long periods, with their necks tucked in a hunched posture until prey comes within range before striking out to catch them. When hunting, they also jump on water feet first or plunge from the air to catch prey.

They may walk about or swim in search of food. They shake their prey vigorously until stunned or killed and then they swallow them head first. The strong digestive acids in their stomachs can easily dissolve bones.

Most feeding is done early morning and at dusk, when all other herons are asleep thus avoiding competition with waterbirds sharing the same habitat. However, when food is scarce, competition high, during the breeding season, or whenever special opportunities afford themselves, they may also hunt during the day.

They are usually solitary forager and aggressively defend their feeding territories; and typically use the same feeding sites repeatedly. 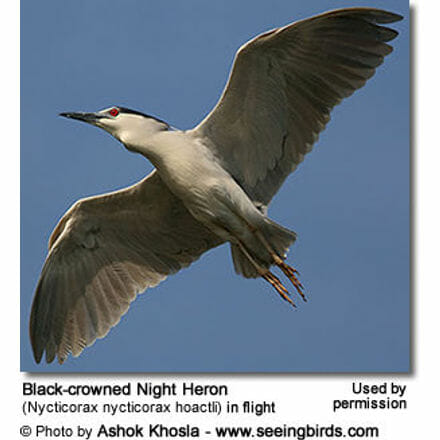 Their contact calls are a loud and harsh ‘Qua,’ ‘Quak,‘ ‘Quark‘, ‘kwark’ or ‘kwok‘, and are most commonly given in flight or from a perch. While migrating, they call to keep in contact with each other and remain close to one another.

Black-crowned Night Herons have a maximum lifespan of 30 years in captivity and only about 20 – 21 years in the wild, where they are unprotected from predation and environmental hazards. 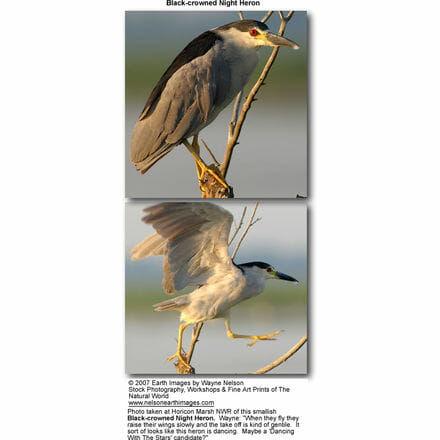 Their common name “night heron” is a result of their nocturnal habits.

In many parts of the world, these birds have been named for the sound of their natural calls, such as in the Falkland Islands, where this heron is referred to as “quark”; “kwak” in Dutch and Frisian (the language of the Frisians found Frisia, a coastal region along the southeastern corner of the North Sea); “kvakoš no?ní” in Czech, “????” in Ukrainian, “??????” in Russian, “V?c” in Vietnamese, “Kowak-malam” in Indonesian, and “Waqwa” in Quechua (the language of the Quechua people found in the central Andes of South America).