The Black-faced Solitaires (Myadestes melanops) are song birds found in the Central American countries of Costa Rica and Panama.

Within their range, these thrushes are well known for the beautiful songs produced by both males and females.

Their popularity as cage birds has caused their numbers to decline as so many of them were trapped for the cage trade.

Another contributing factor continues to be the destruction of their forest habitats.

However, their numbers remain stable in protected areas.

Hence some earlier authorities felt that these species should be considered conspecific (one and the same species); however, the differences in plumage details supports their treatments as separate species. 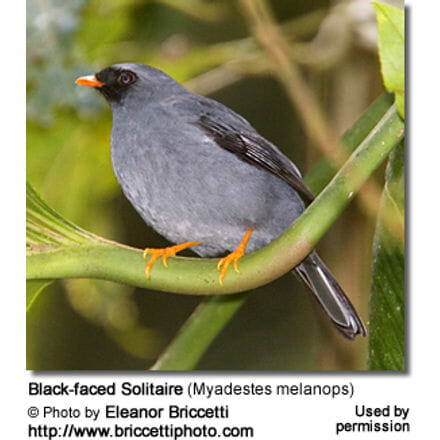 Black-faced Solitaires occur naturally in the mountains of Costa Rica and western Panama, where they are most numerous in western Chiriquí.

After the breeding season which coincides with the wet season, populations found on the Caribbean slope move down to about 1500 feet (~ 450 meters) or even 330 feet (~ 100 meters).

They inhabit humid montane forests, particularly in areas with bamboo and a dense understory. They may visit pastures and other cultivated areas.

Outside the breeding season, they are often observed foraging in large, loose flocks.

Dynamic map of eBird sightings (View sightings and enter your own) 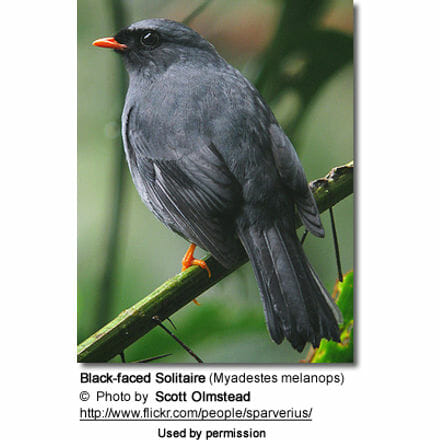 In Costa Rica and western Panama, these birds are unlikely to be confused with any other species. However, similar species can be found further south …

The Black-faced Solitaires mostly feed on fruits (including palm fruits) and various berries. They also take seeds and, on occasion, insects.

Most breeding activities take place from April to June.

The average clutch consists of 2 – 3 pinkish-white eggs with rufous-brown blotches. The incubation period is about 12 – 13 days, and the young fledge 15 – 16 days later. Both parents feed and protect the young.