The Black-fronted Terns (Chlidonias albostriatus) are endangered marsh terns found in New Zealand. Their numbers have been declining due to predation by introduced mammals (such as feral cats, stoats, dogs, etc.) and other birds.

These small, grey-and-white plumaged birds are also known as Sea Martins, Inland Terns, Riverbed Terns – for their preferred habitats – or Ploughboys or Ploughman’s Friends – for their habit of picking earthworms and grubs from freshly ploughed soil.

Black-fronted Terns’ range stretches from the southern tip of the North Island, along much of the eastern South Island from Marlborough to Southland – New Zealand’s southernmost region; and Stewart Island (Rakiura) – a large island south of South Island.

Breeding is nowadays restricted to the eastern regions of the South Island.

They are generally found in or near bodies of fresh water, typically along riverbanks, but outside the breeding season may venture out to forage at sea, but generally remain within 6 miles or 10 km from land. 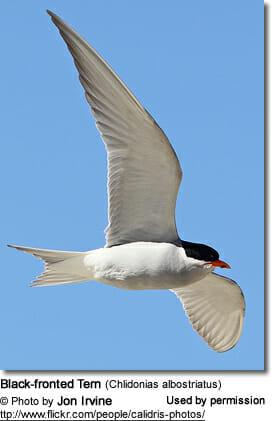 Black-fronted Terns average 11.5 inches or 29 cm in length (including the tail).

Adults are predominantly grey above and white below. The rump is white and they have distinctive black caps, which recede from the bill outside the breeding season and turn black and white mottled.

There is a thin white streak running along the cheeks underneath the cap.

The legs are orange and the bill is red.