The black geese of the genus Branta are waterfowl belonging to the true geese and swans subfamily Anserinae.

They occur in the northern coastal regions of the Palearctic and all over North America, migrating to more southernly coasts in winter, and as resident birds in the Hawaiian Islands.

A self-sustaining population derived from introduced birds of one species is also found in New Zealand; these are the only true geese ever to occur in the Southern Hemisphere in a wild (or rather feral in this case) state.

The black geese derive their vernacular name for the prominent areas of black coloration found in all species. They can be distinguished from all other true geese by their legs and feet, which are black or very dark grey.

Furthermore, they have black bills and large areas of black on the head and neck, with white (ochre in one species) markings that can be used to tell apart most species.

As with most geese, their undertail and uppertail coverts are white.

They are also on average smaller than other geese, though some very large taxa are known, which rival the Swan Goose and the Black-necked Swan in size.

The Eurasian species of black geese have a more coastal distribution compared to the grey geese which share the same general area of occurrence, not being found far inland even in winter (except for occasional stray birds or individuals escaped from captivity).

This does not hold true for the American and Pacific species, in whose ranges grey geese are for the most part absent. 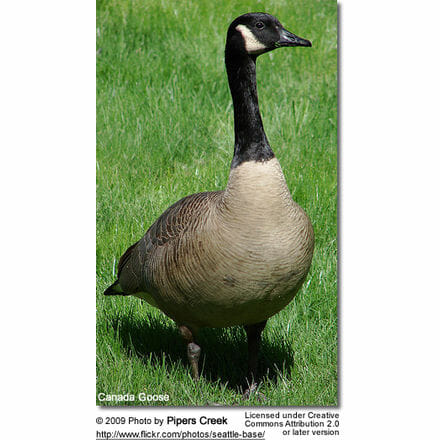 6-8 living species of black geese are known. In addition, one species has been described from subfossil remains found in the Hawaiian Islands, where it became extinct in prehistoric times.

Another undescribed prehistoric species from the Big Island of Hawai‘i was extremely large and flightless; it is tentatively assigned to this genus due to being very peculiar.

Similar but hitherto undescribed remains are known from on Kauaʻi and Oʻahu.

The relationships of the enigmatic Geochen rhuax to this genus are unresolved. It was another prehistoric Big Island form and remains known only from some parts of a single bird’s skeleton, which were much damaged because the bird apparently died in a volcanic eruption, with the bones being found in an ash-filled depression under a lava flow.

A presumed relation to the shelducks (Short 1970) was generally considered highly unlikely due to that group’s biogeography, but more recently, bones of a shelduck-like bird have been found on Kaua‘i.

Whether this latter anatid was indeed a shelduck is presently undetermined.

Similarly, two bones found on Oʻahu indicate the erstwhile present of a gigantic waterfowl on this island. Its relationships relative to this genus and the moa-nalos, enormous goose-like dabbling ducks, are completely undeterminable at present.