The Black Kite (Milvus migrans) is a medium-sized bird of prey in the family Accipitridae which also includes many other diurnal raptors such as eagles, buzzards, and harriers.

Unlike others of the group, they are opportunistic hunters and are more likely to scavenge. They spend a lot of time soaring and gliding in thermals in search of food. Their angled wing and distinctive forked tail make them easy to identify.

This kite is widely distributed through the temperate and tropical parts of Eurasia and parts of Australasia, with the temperate region populations tending to be migratory.

Several subspecies are recognized and formerly with their own English names. The European populations are small, but the South Asian population is very large.

This kite is a widespread species throughout the temperate and tropical parts of Eurasia and parts of Australasia. Curiously, it is not found in the Indonesian archipelago between the South East Asian mainland and the Wallace Line. Vagrants, most likely of the Black-eared Kite, on occasion range far into the Pacific, out to the Hawaiian islands (AOU 2000).

In the northern winter, it is therefore common to have a resident race and a distinguishable migrant form present together in these hotter areas.

In the United Kingdom, the Black Kite occurs only as a wanderer on migration. These birds are usually of the nominate race, but in November 2006 a juvenile of the eastern lineatus, not previously recorded in western Europe, was found in Lincolnshire. 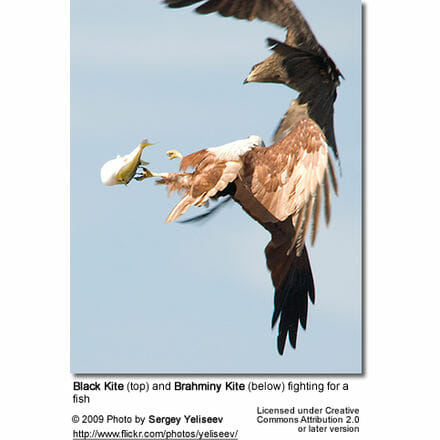 Black Kites are most often seen gliding and soaring on thermals as they search for food. The flight is buoyant and the bird glides with ease, changing directions easily. They will swoop down with their legs lowered to snatch small live prey, fish, household refuse and carrion.

They are opportunist hunters and have been known to take birds, bats and rodents.

They are attracted to smoke and fires, where they seek escaping prey. This behaviour has led to Australian native beliefs that kites spread fires by picking up burning twigs and dropping them on dry grass. The Indian populations are well adapted to living in cities and are found in densely populated areas. Large numbers may be seen soaring in thermals over cities. In some places they will readily swoop and snatch food held by humans.

Black Kites in Spain prey on nestling waterfowl especially during summer to feed their young. Predation of nests of other pairs of Black Kites has also been noted. Kites have also been seen to tear and carry away the nests of Baya Weavers in an attempt to obtain eggs or chicks. 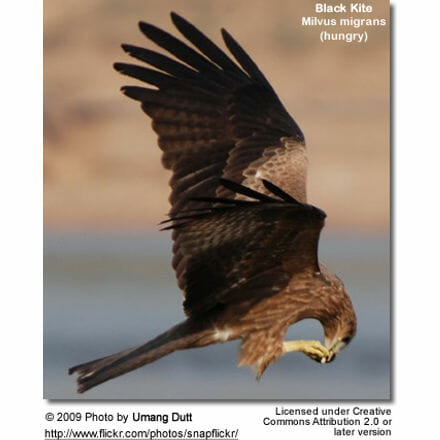 The Black Kite can be distinguished from the Red Kite by its slightly smaller size, less forked tail and generally dark plumage without any rufous.

The sexes are alike. The upper plumage is brown but the head and neck tend to be paler. The patch behind the eye appears darker. The outer flight feathers are black and the feathers have dark cross bars and are mottled at the base.

The lower parts of the body are pale brown, becoming lighter towards the chin. The body feathers have dark shafts giving it a streaked appearance. The cere and gape are yellow but the bill is black (unlike in the Yellow-billed Kite). The legs are yellow and the claws are black.

They have a distinctive shrill whistle followed by a rapid whinnying call. 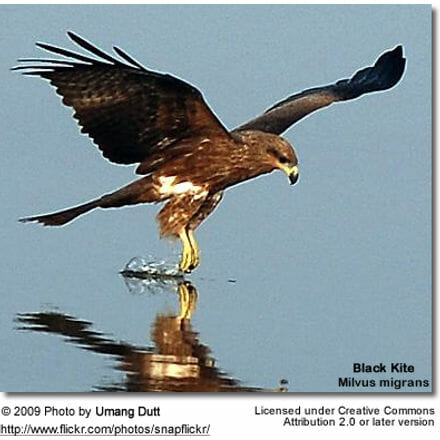 The Black Kite nests in forest trees, often close to other kites. In winter, many kites will roost together.

The Red Kite has been known to hybridize with the Black Kite (in captivity where both species were kept together, and in the wild on the Cape Verde Islands).

Recent DNA studies suggest that the yellow-billed, African races, parasitus and aegyptius, differ significantly from Black Kites in the Eurasian clade, and should be considered as a separate, allopatric (geographically separated) species Yellow-billed Kite, M. aegyptius. They occur throughout Africa except for the Congo basin and the Sahara Desert.

On the other hand, the same study suggests that the Black-eared Kite (M. m. lineatus), sometimes separated as M. lineatus, is not sufficiently distinctive to justify specific status. As molecular information is much more reliable in this species than in the Red Kite, the Black-eared Kite should be regarded a distinct allopatric (geographically separated) subspecies. 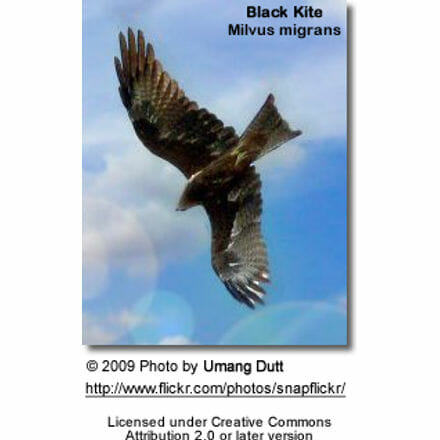 In winter, kites form large communal roosts. Flocks may fly about before settling at the roost. When migrating, the Black Kite has a greater propensity to form large flocks than other migratory raptors, particularly prior to making a crossing across water.

In India, the subspecies govinda shows large seasonal fluctuations with the highest numbers seen from July to October, after the Monsoons, and it has been suggested that they make local movements in response to high rainfall.

The breeding season of Black Kites in India begins in winter, the young birds fledging before the monsoons.

The nest is a rough platform of twigs and rags placed in a tree. Nest sites may be reused in subsequent years.

European birds breed in summer. Birds in the Italian Alps tended to build their nest close to water in steep cliffs or tall trees.

Nest orientation may be related to wind and rainfall. The nests may sometimes be decorated with bright materials such as white plastic and a study in Spain suggests that they may have a role in signalling to keep away other kites.

After pairing, the male frequently copulates with the female. Unguarded females may be approached by other males, and extra pair copulations are frequent. Males returning from a foraging trip will frequently copulate on return, as this increases the chances of his sperm fertilizing the eggs rather than a different male.

Both the male and female take part in nest building, incubation and care of chicks. The typical clutch size is 2 or sometimes 3 eggs. The incubation period varies from 30–34 days. Chicks of the Indian population stayed at the nest for nearly two months. Chicks hatched later in European populations appeared to fledge faster. The care of young by the parents also rapidly decreased with the need for adults to migrate.

Siblings show aggression to each other and often the weaker chick may be killed, but parent birds were found to preferentially feed the smaller chicks in experimentally altered nests. Newly hatched young have down (prepennae) which are sepiaon the back and black around the eye and buff on the head, neck and underparts. This is replaced by brownish gray second down (preplumulae). After 9 to 12 days the second down appears on the whole body except the top of the head. Body feathers begin to appear after 18 to 22 days. The feathers on the head become noticeable from the 24th to 29th day.

The nestlings initially feed on food fallen at the bottom of the nest and begin to tear flesh after 33–39 days. They are able to stand on their legs after 17–19 days and begin flapping their wings after 27–31 days. After 50 days they begin to move to branches next to the nest.

Birds are able to breed after their second year. Parent birds guard their nest and will dive aggressively at intruders. Humans who intrude the nest appear to be recognized by birds and singled out for dive attacks.

Black-eared Kites in Japan were found to accumulate nearly 70% of mercury accumulated from polluted food in the feathers, thus excreting it in the moult process.

Black Kites often perch on electric wires and are frequent victims of electrocution.

Their habit of swooping to pick up dead rodents or other roadkill leads to collisions with vehicles. Instances of mass poisoning as a result of feeding on poisoned voles in agricultural fields have been noted. They are also a major nuisance at some airports, where their size makes them a significant birdstrike hazard.

Like most bird species, they have parasites, several species of endoparasitic trematodes are known and some Digenea species that are transmitted via fishes.

Birds with abnormal development of a secondary upper mandible have been recorded in govinda and lineatus.