The Black Skimmer Rynchops niger is a tern-like seabird, one of three very similar bird species in the skimmer family.

It breeds in North and South America. Northern populations winter in the warmer waters of the Caribbean and the tropical and subtropical Pacific coasts, but the South American races make only shorter movements in response to annual floods which extend their feeding areas in the river shallows. 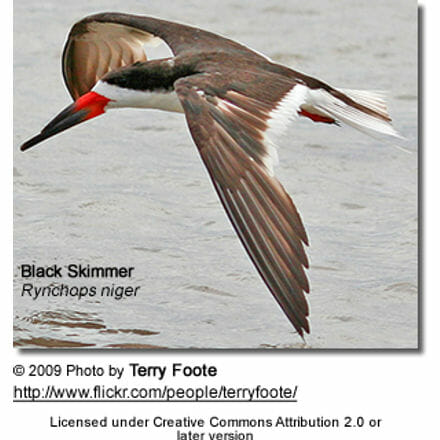 The Black Skimmer breeds in loose groups on sandbanks and sandy beaches in the Americas, the three to seven heavily dark-blotched buff or bluish eggs being incubated by both the male and female.

The chicks leave the nest as soon as they hatch and lie inconspicuously in the nest depression or “scrape” where they are shaded from high temperatures by the parents. They may dig their own depressions in the sand at times.

Parents feed the young almost exclusively during the day with almost no feeding occurring at night, due to the entire population of adults sometimes departing the colony to forage.

Although the beaks are of equal length at hatching, they rapidly become unequal during fledging. 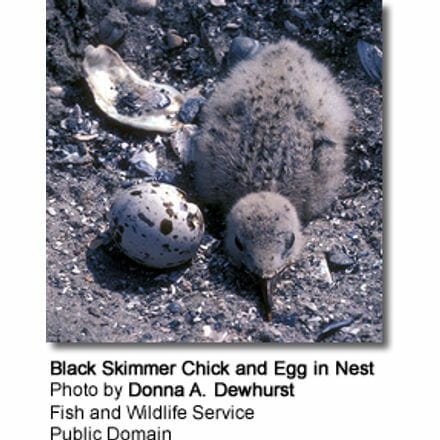 The Black Skimmer is 40-50 cm long with a 107-127 cm wingspan. The males weigh about 325 g, as compared to the smaller female’s 235 g. The inner part of the bill is red, the rest mainly black, and the lower beak (mandible) is much-elongated and flexible. The eye has a dark brown iris and catlike vertical pupil, unique for a bird. The legs are red. The call is a barking kak-kak-kak.

Adults in breeding plumage have a black crown, nape (back of the neck) and upper body. The forehead and underparts are white. The upper wings are black with white on the rear edge, and the tail and rump are dark grey with white edges. The underwing colour varies from white to dusky grey depending on region.

Non-breeding adults have paler and browner upperparts, and a white nape collar. Immature birds have brown upperparts with white feather tips and fringes. The underparts and forehead are white, and the underwings as the adult.

Skimmers have a light graceful flight, with steady beats of their long wings. 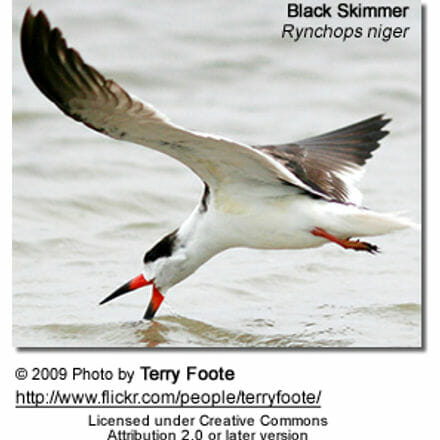 The Black Skimmer has three subspecies:

They feed in often large flocks, flying low over the water surface with the lower beak skimming the water for small fish or crustaceans, caught by touch by day or especially at night. They spend much time loafing gregariously on sandbars in the rivers, coasts and lagoons they frequent.