The Black-tailed Godwit, Limosa limosa, is a large, long-legged, long-billed shorebird first described by Carolus Linnaeus in 1758. It is a member of the Limosa genus, the godwits. There are three subspecies, all with orange head, neck and chest in breeding plumage and dull grey-brown winter coloration, and distinctive black and white wingbar at all times. 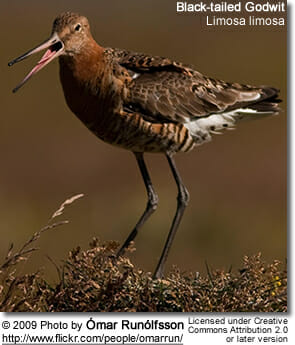 Its breeding range stretches from Iceland through Europe and areas of central Asia. Black-tailed Godwits spend winter in areas as diverse as Australia, western Europe and west Africa.

The species breeds in fens, lake edges, damp meadows, moorlands and bogs and uses estuaries, swamps and floods in winter; it is more likely to be found inland and on freshwater than the similar Bar-tailed Godwit. The world population is estimated to be 634,000 to 805,000 birds and is classified as Near Threatened.

The Black-tailed Godwit is a large wader with long bill (7.5 to 12 cm long), neck and legs. During the breeding season, the bill has a yellowish or orange-pink base and dark tip; the base is pink in winter. The legs are dark grey, brown or black.

Males and females look alike, but in breeding plumage, they can be separated by the male’s brighter, more extensive orange breast, neck and head. In winter, adult Black-tailed Godwits have a uniform brown-grey breast and upperparts (in contrast to the Bar-tailed Godwit‘s streaked back). Juveniles have a pale orange wash to the neck and breast.

This species was first described, as Scolopax limosa, by Carolus Linnaeus in 1758. Its scientific name is derived from the Latin limus, meaning ‘mud’. The Black-tailed Godwit is a member of the genus Limosa (godwits), family Scolopacidae (sandpipers) and order Charadriiformes, the waders. There are three subspecies: 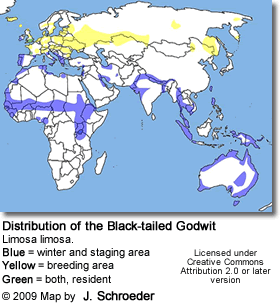 Black-tailed Godwits have a discontinuous breeding range stretching from Iceland to the far east of Russia. Their breeding habitat is river valley fens, floods at the edges of large lakes, damp steppes, raised bogs and moorlands.

Breeding can also take place in sugar beet, potato and rye fields in the Netherlands and Germany.

In spring, Black-tailed Godwits feed largely in grasslands, moving to muddy estuaries after breeding and for winter. On African wintering grounds, swamps, floods and irrigated paddy fields can attract flocks of birds. In India, inland pools, lakes and marshes are used, and occasionally brackish lakes, tidal creeks and estuaries.

Godwits from the Icelandic population winter mainly in the United Kingdom, Ireland, France and the Netherlands, though some fly on to Spain, Portugal and perhaps Morocco.

Birds of the limosa subspecies from western Europe fly south to Morocco and then on to Senegal and Guinea-Bissau. Birds from the eastern European populations migrate to Tunisia and Algeria, then on to Mali or Chad. Young birds from the European populations stay on in Africa after their first winter and return to Europe at two years old. Asian Black-tailed Godwits winter in Australia, Taiwan, the Philippines, Indonesia, and Papua New Guinea.

They are much more likely to be found on inland wetlands than the coastal Bar-tailed Godwit. They migrate in flocks to western Europe, Africa, south Asia and Australia. Interestingly, although this species occurs in Ireland and Great Britain all year-round, they are not the same birds.

The breeding birds depart in autumn, but are replaced in winter by the larger Icelandic race. These birds occasionally appear in the Aleutian Islands and, rarely, on the Atlantic coast of North America.

There is an estimated global population of between 634,000 to 805,000 birds and estimated range of 7,180,000 square kilometres. In 2006 BirdLife International classified this species as Near Threatened due to a decline in numbers of around 25% in the previous 15 years. It is also among the species to which the Agreement on the Conservation of African-Eurasian Migratory Waterbirds (AEWA) applies.

Black-tailed Godwits are mostly monogamous; although it was not recorded in a four-year study of 50-60 pairs, bigamy was considered “probably frequent”.

A study of the Icelandic population showed that despite spending winter apart, pairs are reunited on their breeding grounds within an average of three days of each other. If one partner does not arrive on time, ‘divorce’ occurs.

They nest in loose colonies. Unpaired males defend a temporary territory and perform display flights to attract a mate. Several nest scrapes are made away from the courtship territory, and are defended from other godwits. Once eggs are laid, an area of 30-50 metres around the nest is defended. The nest is a shallow scrape on the ground, usually in short vegetation. The eggs may be hidden with vegetation by the incubating parent.

The single brood of three to six eggs, colored olive-green to dark brown, measure 55 x 37 mm and weigh 39 g each (of which 6% is shell). Incubation lasts 22–24 days and is performed by both parents. The young are downy and precocial and are brooded while they are small and at night during colder weather. After hatching, they are led away from the nest and may move to habitats such as sewage farms, lake edges, marshes and mudflats. The chicks fledge after 25–30 days.

They mainly eat invertebrates, but also aquatic plants in winter and on migration.

Occasionally, fish eggs, frogspawn and tadpoles are eaten. In water, the most common feeding method is to probe vigorously, up to 36 times per minute, and often with the head completed submerged.

On land, Black-tailed Godwits probe into soft ground and also pick prey items from the surface.

In Europe, Black-tailed Godwits are only hunted in France, with the annual total killed estimated at 6,000 to 8,000 birds. This puts additional pressure on the western European population, and the European Commission has a management plan in place for the species in its member states.

In England, Black-tailed Godwits were formerly much prized for the table. Sir Thomas Browne (1605-1682) said: “[Godwits] were accounted the daintiest dish in England and I think, for the bignesse, of the biggest price.” Old names included Blackwit, Shrieker, Barker and Jadreka Snipe.

The Icelandic name for the species is Jaðrakan. 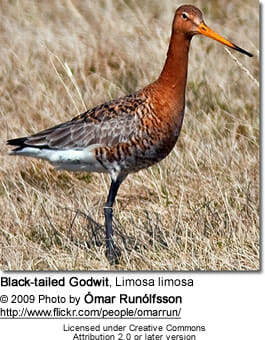