The Black-throated Mango (Anthracothorax nigricollis) is mostly a South American hummingbird species, although it also occurs in the southern regions of Central America.

It occurs naturally in central and eastern Panama (from the Panama Canal going east). In South America, it is found in Colombia, east to Venezuela, the islands of Tobago and Trinidad, the Guianas, south to southern Brazil, northeastern and northeastern and central Bolivia, Paraguay to northeastern Argentina.

They inhabit secondary and gallery forests and are common along tropical lowland evergreen forest edges (up to 3,300 feet or 1,000 m). They also inhabit open country, gardens and cultivated areas.

Some populations are resident, while others are seasonal migrants traveling up to 1000 miles (1,600 km), although their movements are not well understood. 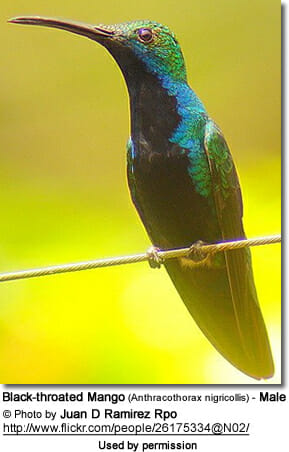 The Black-throated Mangos average 4 inches (10.2 cm) in length (including tail) and weigh about 0.3 oz (7.2g). The longish black bill is slightly down curved. The central feathers are dark and the outer tail feathers are wine-red tipped with black.

The adult male has a glossy bright green upper plumage. His throat and chest are black, bordered with blue-green. The sides are green. The black of the chest tapers onto the abdomen.

The adult female has a bronze-green upper plumage. She is white below with a black central stripe.

Juveniles have some grey or buff feather tips on the head and wings. They are brownish around the eyes. 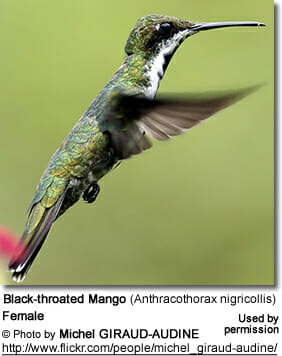 The Black-throated Mango Hummingbirds primarily feed on nectar taken from a variety of brightly colored, scented small flowers of large trees, shrubs and epiphytes. They favor flowers with the highest sugar content (often red-colored and tubular-shaped) and seek out, and aggressively protect, those areas containing flowers with high energy nectar.

They particularly like Erythrina speciosa, Stifftia chrysantha, and the Fountain Tree (Spathodea campanulata). The Black-throated Mango breeds throughout the year in most of its natural range.

She lines the nest with soft plant fibers, animal hair and feather down, and strengthens the structure with spider webbing and other sticky material, giving it an elastic quality to allow it to stretch to double its size as the chicks grow and need more room. The nest is typically found on a bare, low, thin horizontal branch.

Their nests has been observed on trees that were beset with Pseudomyrmex stinging ants (i.e. in the Cuyabeno Faunistic Reserve in Ecuador). It is possible that these hummingbirds deliberately select such trees for nesting in order to deter predators.

The average clutch consists of two tiny white eggs (measuring 15 x 9.5 mm), which she incubates alone for about 16 to 17 days, while the male defends his territory and the flowers he feeds on.

As is the case with other hummingbird species, the chicks are brooded only the first week or two, and left alone even on cooler nights after about 12 days – probably due to the small nest size.

The chicks leave the nest when they are about 24 days old.