In the United States, this vulture receives legal protection under the Migratory Bird Treaty Act of 1918.

The American Black Vulture tends to have a more southerly distribution than its compatriot, the Turkey Vulture, which breeds well into Canada.

These vultures are found in open regions in the southeastern United States, Mexico, Central America and South America. They are usually permanent residents.

The subspecies differ in size according to Bergmann’s Rule, and the amount of white underwing coloration also varies. As it probably forms a cline over its entire range, the species is often considered monotypic (a genus consisting of only one species).

A leucistic (reduced pigmentation) Coragyps atratus brasiliensis was observed in Piñas, Ecuador in 2005. It had white plumage overall, with only the tarsus and tail as well as some undertail feathers being black. It was not an albino as its skin seemed to have had the normal, dark color and it was part of a flock of some twenty normally-plumaged individuals.

The American Black Vulture is a scavenger and feeds on carrion, but will also eat eggs or kill newborn animals. They may also eat decomposing plant material.

In areas populated by humans, it also feeds at garbage dumps. It finds its meals either by using its keen eyesight or by following other (New World) vultures, which possess a keen sense of smell.

These birds on occasion forage in groups. They soar high when searching for food, holding their wings flat when gliding. 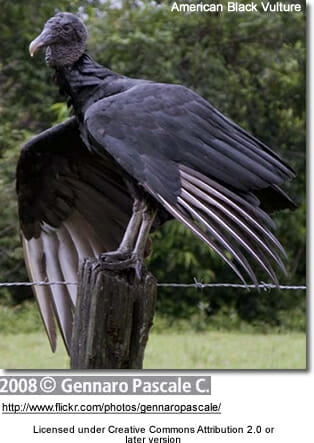 Lacking a syrinx—the vocal organ of birds—its only vocalizations are grunts or low hisses.

The female lays 2 or 3 eggs on the ground in a wooded area or in a hollow log or other cavity. Both parents incubate and feed the young, regurgitating food at the nest site.

Though not having any natural predators, they have become scarce in some areas due to lack of suitable nesting habitat. They are known to regurgitate when approached or disturbed, which in birds, besides being a sign of nervousness, assists in predator deterrence and taking flight (by decreasing takeoff weight).

In Canada, Mexico and the United States, this species receives special legal protections as covered under the Migratory Bird Treaty Act of 1918.

From the Early to the Late Pleistocene a prehistoric species of Black Vulture, Coragyps occidentalis, occurred all over the present species’ range.

This bird did not differ much from the Black Vulture of today except by its size, which was about 10-15% larger, its relatively flatter and wider bill (Fischer 1944), filled the same ecological niche as the living form (Hertel, 1995), and indeed seems to have evolved into it by becoming smaller during the last ice age (Howard, 1962).

Well documented from fossil bones, the genus Coragyps gives a rare glimpse in the evolutionary dynamics of two chronospecies. The final stages of this evolutionary transformation must have been witnessed by humans: a subfossil bone of the extinct species was found in an Paleo Indian to Early Archaic (9000-8000 years BCE) midden at Five Mile Rapids near The Dalles, Oregon (Miller, 1957).