The Black-whiskered Vireos, Vireo altiloquus, are endemic to the United States; where they are mainly found on the southern coasts and Keys of Florida.

During the breeding season, they are strictly summer residents in Florida. They migrate to South America by mid-September and return to Florida in April.

Although vireos are seen along the upper Gulf coast, breeding occurs only south of Cedar Key.

The preferred habitat of the Black-whiskered Vireo is usually red mangrove swamps and tropical hardwood forests in south Florida. In central Florida, coastal live oak hammocks are used, as at Fort DeSoto Park in Pinellas County.

This vireo is named for a distinctive narrow black line that looks like a whisker on each side of its white throat.

As is typical of vireos, it has a large, hooked bill. It has thick blue-grey legs and a stout bill. The black-whiskered vireo has a gray crown, olive green back and wings, and white underparts tinged yellow on its sides.

White eyebrows (supercilliums) contrast with red eyes and dark eyelines. This vireo averages 13 – 15 cm in length, has a 25 cm wingspan and weighs 17-19 g.

This songbird is often heard singing in tropical hammocks and mangroves, as well as in the gardens and yards. 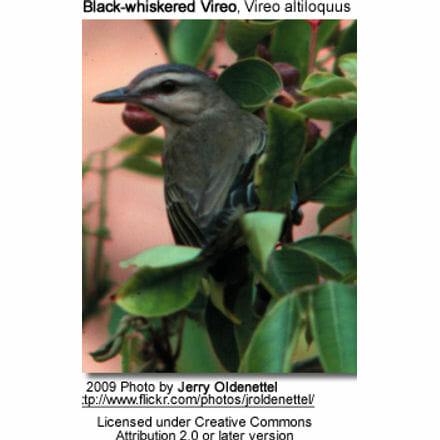 The Black-whiskered Vireo is most similar to the Red-eyed Vireo and can be distinguished by its black malar (cheek) streak.

Other vireos also lack the malar streak and have different face patterns.

Black-whiskered vireos usually forage for insects high up in the foliage of trees. Almost 90% of the Black-whiskered Vireo’s diet consists of insects and other invertebrates (= animals without internal skeleton, such as larvae, earthworms, etc); fruit makes up the remainder.

During April and May, the male sings all day long to defend his breeding territory. Nests are woven cups, suspended, in the horizontal fork of branches of mangroves and broadleaf trees.

This bird suffers from nest parasitism by the Brown-headed Cowbird in its US range, and the Shiny Cowbird further south.

One of its songs sounds like the phrase whip-Tom-Kelly, repeated, and punctuated with pauses.