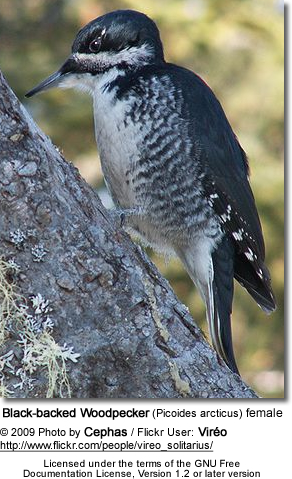 The Black-backed Woodpecker (Picoides arcticus) is known by two other names: the Arctic Three-toed Woodpecker, and more commonly, the Three-Toed Woodpecker.

One of only three extant birds with three toes instead of the usual four, it shares that feature with the American and Eurasian Three-toed Woodpeckers.

It dwells in the woodlands of the North American continent and is similar to the Hairy Woodpecker in appearance.

Although the Black-backed doesn’t actually migrate, it does sporadically travel southward in the autumn, invading areas in which it is not generally found. This is a delight to bird-watchers who look forward to the years in which these irruptions occur. These intermittent invasions by seed-eating birds are often a sign of increased populations. Population shifts occur as the birds move to newly regenerated forest areas. As these burned or damaged woodlands redevelop, they provide new vegetation for foraging. As of now, the Black-backed Woodpecker’s population status is “Least Concern.”

A reclusive bird, it prefers its privacy and will only interact with other birds when defending its breeding territory. Because of this there is much that is not known about this bird. Its lifespan, for example, can only be estimated by comparing it to its close relative, the Three-toed Woodpecker. Since the Three-toed has a lifespan of 6 to 8 years, it is assumed that the Black-backed Woodpecker’s lifespan is similar.

These arboreal birds are active only in the daytime. Since they dwell mainly in burned forests, they have few predators, as most other animals and birds find their preferred habitat uninviting.

Also, they are not easily observed in the burnt forests since their black plumage blends in well with the blackened, dead trees.

The Black-backed Woodpecker inhabits the woodlands of North America, specifically Canada, Alaska, and the northern United States. It can be found from central Alaska, throughout Canada, and southward through the northern U.S. Rockies.

In South Dakota, this species is mostly found only in the higher elevations of the Black Hills. Occasionally, during the winter, it can be spotted visiting Pennsylvania, Ohio, Indiana, and Nebraska. Its northernmost range extends from Alaska to Newfoundland and Labrador, then reaches south through southeastern British Columbia to central California.

The eastern range begins in British Columbia and encompasses the northeast coast of the United States. Although most Black-backed Woodpeckers birds stay in their ranges year-round, some of the birds will drift south to Nebraska, Illinois and New Jersey.

Like other Woodpeckers, the Black-backed dwells in woodlands that contain dead or dying trees, preferably conifers, since wood-boring beetles and their larvae are plentiful in them.  Forested areas which have been burned, flooded, or damaged by insects or the weather attract them; however, they also can be found in healthy coniferous woodlands. They live in the higher elevations in the U.S. and Canada. In northern Canada, they are found in the lowlands, taking advantage of both healthy and burned forests. Any area containing burned, logged, or swampy woodlands is considered a real find for them.

They prefer to frequent recently burned, new growth areas of mixed conifer, Lodgepole pine, Douglas-fir, and spruce-fir. They will remain in these burned forests for 3-5 years before leaving in search of more prey, having exhausted the supply in that area. The only months they haven’t been spotted are January and February, possibly because bird-watchers are not active during those months. For the most part, they are only intraspecifically territorial—they will defend the nests most often against other aggressive Black-backed Woodpeckers. In Oregon, their home range size is small; there is no need for an expansive range since there is an abundance of mature, old-growth woodlands. In other areas, the home range is considerably greater. They prefer a temperate climate and dwell at elevations of around 750 m (2460 ft.). They will also frequent mountainous regions.

The Black-backed Woodpecker’s home territories are approximately 2 square km around their nesting sites. The birds will expand this area if there is not sufficient food for them. 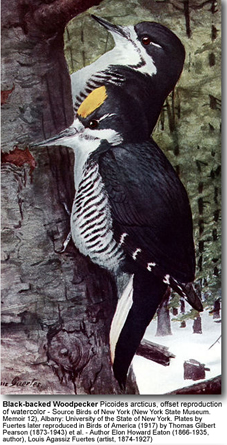 The Black-backed Woodpecker’s plumage is predominantly black and white, which often confuses him with the Three-toed Woodpecker.

In males, the yellow patch on the crown distinguishes him from all other Woodpecker species. This patch is also smaller and more solidly yellow in the Black-backed. In the Three-toed, the patch is red, larger and streaked.

The Black-backed Woodpecker’s head, back, wings and rump are completely black, whereas the Three-toed has a small amount of white on its back, and the white line under its eye is not as broad as it is in the Black-backed. Both have a fine white line behind the eye. The Black-backed is white from the throat to the belly, and the flanks are white with black bars. There is a narrow streak behind the eye, and a white stripe on the moustache area which widens at the rear margin and extends along the lower margin of the auricular feathers. The flanks are white with black barring. White spots adorn the black wings on the flight feathers. The center rectrices are black, but the outer tail feathers are white. Males and females appear similar, but the male’s fuzzy yellow cap enables the bird watcher to tell them apart. The solid black color is glossy and reflects green on the back while the head reflects blue. The facial pattern consists of a fine white line behind the eye.

The female Black-backed Woodpecker has a solid black forehead and crown, unlike the streaked and white-speckled forehead and crown of the female Three-toed Woodpecker.
Her plumage resembles the male’s except for the yellow cap, and the white line behind her eye is more conspicuous. Males have been found to be approximately 6 to 7% larger than females and are more colorful. The females are slightly lighter in color and have shorter bills.

The juveniles are smaller than the adults, and their plumage is duller and has reduced or absent yellow patches. 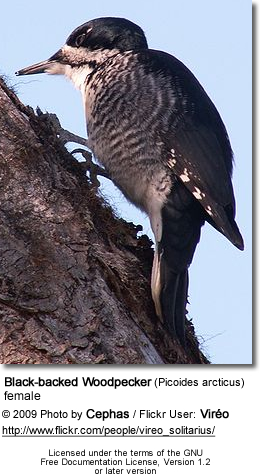 Since the Black-backed Woodpecker thrives in burnt forests, he feasts on the wood-boring beetles that regularly erupt in those areas to consume the dead trees. He also enjoys the Engraver, Spruce, and Mountain Pine beetles. He will feed upon the larvae of white-spotted sawyers, jewel or metallic wood-boring beetles and long-horned beetles. He is considered a “burnt-forest specialist,” hopping along the tree and its branches as he pecks and drills. He will move purposefully along the trunks and primary branches of live or dead standing trees and fallen logs. In addition to the beetles, he will feed on their larvae, other insects and invertebrates, ants, weevils, spiders, grubs, fruits, berries, sap, cambium, acorns, and other nuts.

His foraging involves stripping the larger pieces of bark off the trees, thus exposing the hidden insects. While flaking off the scorched bark from the trees, the Black-backed exposes the orange cambium layer underneath, which explains why so many of the trees exhibit orange spots. Large patches of missing bark in the northern forests give away their locations. He also revels in the noise he can make while crunching these invertebrates! This species plays an important role in the control of the beetle infestations in their territories.

A busy, active bird, he can be seen scooting up and down the trees as he climbs in search of insects. They are considered an “eruptive” species, thriving in response to increased insect populations following a fire. After two or three years in the same territory, though, he will have exhausted the supply of beetles and insects and will turn to plant material, such as bark, seeds, grains and fruits, to sustain him.

The Black-backed Woodpecker has developed some adaptations, skills, and physical characteristics which enable him to be a more efficient forager. He will perch leaning back so that there is a greater distance between him and the tree, thus allowing him a more powerful strike against the trunk. Since he has only the hallux toe in the back of the foot, this Woodpecker’s distal leg bones have become shorter; this enables him to hammer with more force. His single back toe actually aids him in his search, anchoring him while he tears at the bark.

Like so many woodpecker species, the female forages higher in the trees than the male and is the primary provider of the nestlings’ food supply. The male, however, brings a larger quantity of food when he comes in to feed them. . 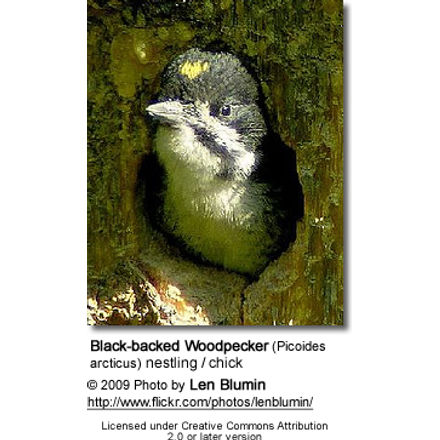 This monogamous species nests and breeds in the forests of Canada, Alaska and the northern United States. They will hollow out a new nest each year, and the male usually begins excavating his nest in April and May. Some birds wait until June and July, depending on the altitude and northernmost distances in which they live. They prefer to excavate into the decayed heartwood of the tree, preferably while the outer shell is still strong. In northwest Montana, the Black-backed will excavate in the western larch or Douglas fir forests. They have a successful reproduction rate; in Oregon, 63% of the 19 nests followed by researches were successful.

The bonded pair remains together not only during breeding season or year-round, but possibly for life. Once they do mate, they rarely interact with others of the same species. The male provides visual communication by raising his bright yellow crest in order to attract a mate and defend the nest.

The nest’s entrance hole is about 1 ½ to 2 inches in diameter and can be as deep as 10-15 inches. The nest is usually constructed from 5 to 70 feet from the ground, and the inside is composed of decayed wood chips. She will lay 3-6 white eggs, and both share incubation duties, but the male takes over the night duties. Incubation lasts 12 to 14 days, and the chicks fledge at about 24 days. They only raise one brood per season; however, if the first nest fails, they might lay a second clutch. The young will follow their parents until autumn, learning foraging, defense, and independence skills. After that, they leave the area.

Although this is one of the more vocally quiet Woodpeckers, they have a call note that consists of a single, sharp “pik”, or “kyik.” It is of a lower pitch than the call of the American Three-toed Woodpecker. This call tone has a metallic sound and is helpful when trying to locate them. When performing his defense display, in which he hunches down and spreads his wings, he is known to emit an aggressive “wet-et-ddd-eee-yaaa,” which is a cross between a scream, a rattle and a snarl! During nesting season, these calls become quite noisy

When the nestlings call for food, they make a ‘gurgling’ call; the parents respond by using an identical call to inform the young that food is on the way.