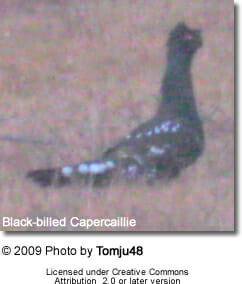 This sedentary species breeds in the larch taiga forests of eastern Russia as well as parts of northern Mongolia and China.

In the far west of its range the Black-billed Capercaillie has been known to hybridize with the Western Capercaillie.

The male Black-billed Capercaillie resembles its western counterpart, except that it is slightly smaller, has a smaller bill, slightly longer tail, and a shorter beak. The Black-billed is also more predominantly black, and there are large white spots at the tips of the uppertail coverts and on wings.

Females look like their western counterparts, except that the plumage is greyer with more uniformly scaled underparts, lack the rusty unmarked breast area, and have more noticeable white spots on wings.