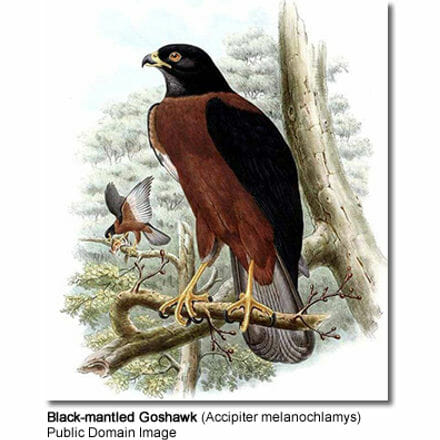 The Black-mantled Goshawks (Accipiter melanochlamys) – also known as Black-mantled Accipiters or Black-mantled Sparrowhawks – are found in New Guinea (a large island in the southwest Pacific Ocean), where they are generally uncommon.

In New Guinea, these raptors have been reported …

They inhabit montane forests, but can occasionally be spotted at forest edges or in adjacent gardens.

They are generally resident (non-migratory), but juveniles are known to disperse from breeding areas.

Two forms are currently recognized. However, some authorities don’t recognize two races and merge the subspecies with the nominate form.

The race found in eastern parts are said to have a paler plumage.

Reddish brown below and blackish brown above (including head)

The juveniles on this page were ID by experts in this field (according to Chuck Brannon). The difference in plumage is quite startling. As one can see the back is varied brown. There are vertical lines running down the chest towards the stomach, and from the head towards the upper back.

These raptors mostly feed on birds, frogs and insects.

As is typical of raptors, they build bulky stick nests in tall trees.