The Black-necked Grebe, Podiceps nigricollis †, is a member of the grebe family of water birds. It breeds in vegetated areas of freshwater lakes across Europe, Asia, Africa, northern South America and the southwest and western United States.

The Black-necked Grebe is 28–34 cm (12″-14″) long. The adult is unmistakable in summer with a black head and neck and yellow ear tufts. In winter, this small grebe is white with a poorly defined black cap, which distinguishes it from the crisper-looking Slavonian Grebe.

The North American subspecies, P. n. californicus is known as as the Eared Grebe.

These birds migrate in winter, mostly to the Pacific Coast. Black-necked Grebes of the nominate subspecies P. n. nigricollis in the cooler temperate regions of the Old World also winter further south, with many European birds moving to the Mediterranean area. 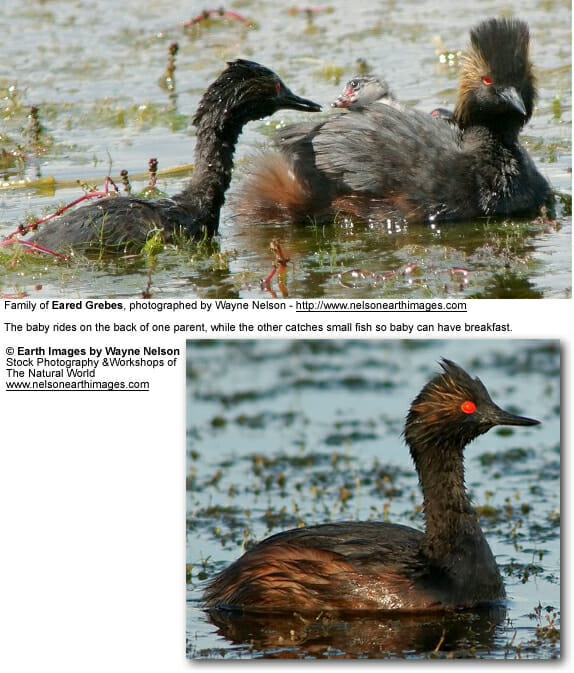 Like all grebes, the Black-necked Grebe nests on the water’s edge, since its legs are set very far back and it cannot walk well. Usually two eggs are laid, and the striped young are sometimes carried on the adult’s back.

The Black-necked Grebe is an excellent swimmer and diver, and pursues its prey underwater, eating mostly fish as well as aquatic insects and larvae. It prefers to escape danger by diving rather than flying, although it can easily rise from the water.

In courtship the male offers the female a mellow poo-ee-chk.