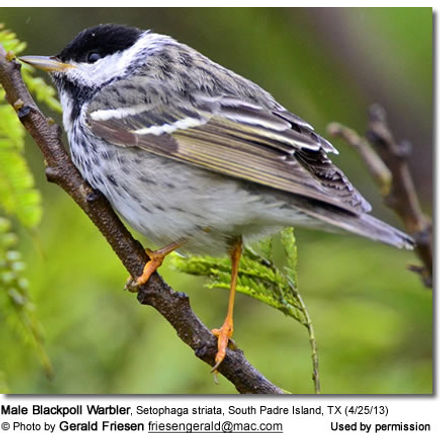 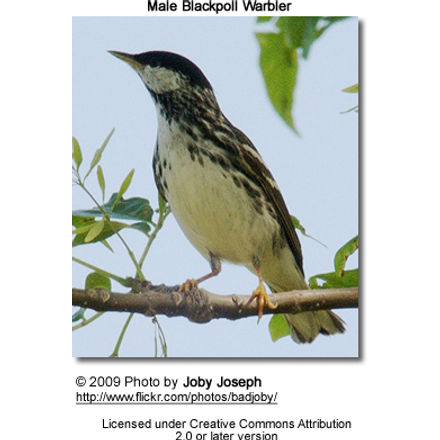 The Blackpoll Warbler, Dendroica striata, is a migratory song bird of the New World warbler family. It is one of the most common birds of the northern boreal forests and has a very large range.

Blackpoll Warblers breed in northern North America, from Alaska, east to Newfoundland and Nova Scotia, and south to central British Columbia in Canada , and into the Great Lakes region, New England and New York, United States.

The birds occurring in Alaska are sometimes described as a subspecies (lurida); however, it is physically identical to the other members of this species.

They are migratory, wintering in north-central to northeastern South America, down to northern and western Brazil. They mostly remain in the western Amazonian region; however, some may winter south to northeastern Argentina

During the fall migratory, the Blackpoll Warbler flies over the Atlantic Ocean from the northeastern United States to Puerto Rico, the Lesser Antilles, or northern South America. This entails a non-stop flight of 3,000 km (1,864 mi) over water. It is estimated that it takes them 88 hours to cross the ocean. In order to accomplish this amazing feat — they will double their weight before the start of the migration. At the beginning of their journey they may weigh up to 20 grams (0.7 oz), but it is estimated that they lose 0.8 grams (0.03 oz) of fat every hour of flight. Birds with lower body weights and those that are not generally strong are not likely to finish this journey. They also take advantage of prevailing wind currents to facilitate the flight.

They are rare vagrants to Western Europe, although their northerly range and long-distance migration put them in one the category of more frequent transatlantic passerine wanderers.

The Blackpoll Warblers are native to:

They are vagrants to: the Island of Belize; France; French Polynesia; Greenland; Ireland; United Kingdom

They could possibly occur in Jamaica (not officially recorded) 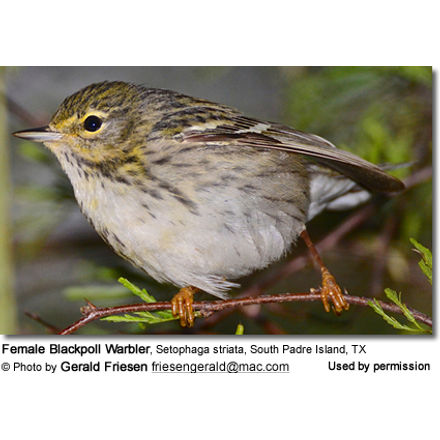 The adult females essentially resemble washed-out versions of the summer males, and in particular, the females lack the strong head patterns, and their crowns and faces are shades of grey.

Non-breeding birds of this species have greenish heads, dark-streaked greenish upper plumage and yellowish breasts, with the yellow extending to the belly in young birds. Their wing bars are always present.

Immature birds resemble fall adults, but the plumage is duller and with less streaking. The legs may be dark, but the bottom of the feet are orange-yellow. The young birds will obtain their adult plumage during the next spring migration. 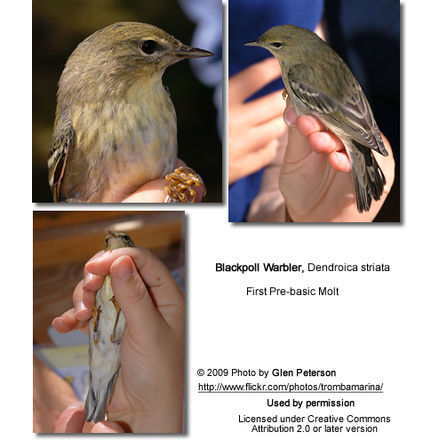 Their breeding habitats are coniferous woodlands, especially those in which spruce trees grow. These birds’ breeding ranges extends to the Taiga (also known as the boreal forest characterized by coniferous forests – found in North America most of inland Canada and Alaska).

Blackpoll Warblers commonly place the open-cup nest in a conifer about 1-5 meters (3-16 feet) above the ground. The nest is made of twigs and lichens, and lined with grasses, mosses, fine plant fibers, feathers and down.

A clutch consists of lay 3 – 5 eggs (sometimes as many as 9). The eggs are white, buff or pale green with brown or purplish spots. The eggs are incubated by the female for about 11 – 12 days. The young hatch blind and helpless and are raised by both parents. They are ready to leave the nest when they are about 11 – 12 days old.

They usually only raise one brood a season.

These birds are insectivorous, but will opt for berries in winter.

They often forage high in trees, and sometimes catch insects while in flight.

The song of the male Blackpoll Warbler is one of the highest-pitched of all birds in North America consisting of simple repetition of loud and high tsi notes. Their calls are thin sits. Regional song variations have been noted.