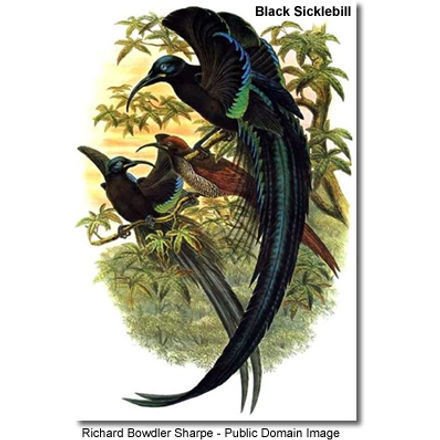 The Black Sicklebill, Epimachus fastuosus, is a large bird of paradise that occurs naturally in the midmountain forests of New Guinea (situated to the north of Australia in the southwest Pacific Ocean).

The Black Sicklebills are patchily distributed in the mountainous areas of western and central New Guinea:

… from the Tamrau and Arfak Mountains in Vogelkop of Papua (formerly Irian Jaya), Indonesia, to the Kubor and Kratke ranges and a few localities in the Torricelli and Bewani mountains in Papua New Guinea (Rand and Gilliard 1967, B. M. Beehler in litt. 1987).

The Black Sicklebills are only locally common, for example on Mount Bosavi and the Arfak Mountains, and generally scarce to rare or locally absent (Coates 1990).

They typically occur in mid-montane forest at 1,280-2,550 m (4,200 – 8,400 ft), but may move to lower or higher elevations. They primarily occur in primary forest, and are less often recorded in adjacent secondary growth and gardens.

The Black Sicklebill is the largest-plumbed member of its family; including the tail, the males average 100 cm in length and the females about 48 cm. These bird-of-paradise have long, down curved bills and very long tails.

The male has a mostly black plumage with glossy green, blue and purple scale-like feathers. He has red eyes, a bright yellow mouth and a long curved black bill. His most distinctive feature is the huge sabre-shaped tail and large fan-like plumes on the sides of his chest.

The female is smaller than the male. Her plumage is mostly reddish-brown, with chestnut wing-feather fringes and fine, dark brown barring on her off-white underparts. Her eyes are red-brown.

The Black Sicklebills forage for fruit and small animals in the tree canopy; as well as probing into moss and plants for insects and other arthropods, such as crabs, lice, shrimp, spiders, scorpions, centipedes and millipedes.

The Black Sicklebills do not form strong pair bonds. The male will mate with several females over the breeding season. In order to attract females, he performs a horizontal courtship display with the pectoral plumes raised around his head. The female builds the nest and attends to the young alone.

The Black Sicklebills have hybridised with the Arfak Astrapia in the wild, creating offspring that were once considered a separate species, the Elliot’s Sicklebill, Epimachus ellioti. While some believe this was a valid species that is possibly critically endangered or extinct, it is generally considered a hybrid by most mainstream ornithologists.

This species is listed as Vulnerable based on an estimated small population which is believed to be declining due to hunting for food or the long plumes of the males, which are used in traditional head-dresses. Other risks to their continued existence are a growing human population and conversion of their natural habitat for agricultural uses or forest losses due to logging. This species is intolerant of secondary forests caused by shifting agriculture and logging. The Black Sicklebill is classified as Vulnerable on the IUCN Red List of Threatened Species and is listed on Appendix II of CITES.